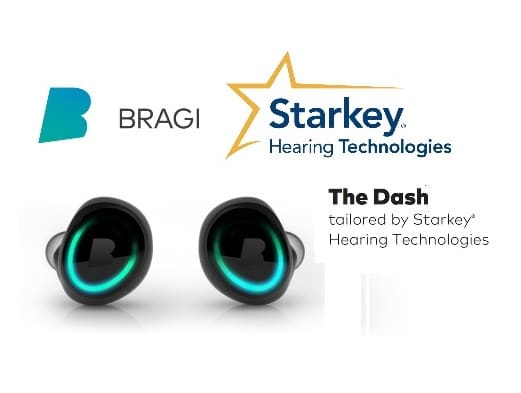 The pioneering hearable company, Bragi, has unveiled its latest innovations this week. The company announced two new additions to its product line: Dash Pro and the Dash Pro Tailored by Starkey. The Dash Pro is said to be re-engineered to address issues encountered with the original Dash, along with updated OS3 software.

According to the company, the Dash Pro offers improved Bluetooth performance, better quality audio streaming and as much as five hours of battery life. This, say industry analysts, was a necessary move by the company, which now is facing stiff competition from the likes of Apple, Samsung and Jabra.

The surprise partnership between Bragi and Starkey Hearing Technologies, which was announced at the Starkey 2016 Hearing Innovation Expo in Las Vegas, caused a lot of buzz in the hearing industry. Now, after more than a year following the announcement, the Dash Pro Tailored by Starkey looks like a product any audiophile could appreciate and one that hearing professionals may also be particularly interested in.

For anyone interested in a customized version of the Dash Pro, after ordering online for a price tag of $499 (which includes the cost of ear impressions), the company will get that customer in touch with a local hearing care professional to make custom ear impressions.

The custom-tailored Dash Pro includes Knowles Balanced Armature Speakers with a back vent, for “elevated bass and EQ optimization” for the custom-made shell and vented speakers. Starkey will also include its HearClear replaceable WaxGuard system on the custom devices.

The customer’s name will be laser engraved on their Dash Pro devices and on the protective slide cover for the charging base.

The new language translation function, using the iTranslate app, is also offered for users of the original Dash after they upgrade to OS3 software.

The Dash Pro is currently available through the Bragi Shop for $329. According to the company, major retailers, such as Best Buy, will begin offering the devices within the next several weeks.