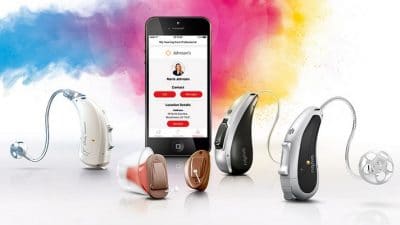 Earlier this month, Signia (formerly Siemens) announced their latest hearing aid innovation: Notch Therapy. According to the company, they are the first in the hearing aid industry to use the novel approach to combat tonal tinnitus, the most common form of tinnitus.

Tonal tinnitus, defined by the American Tinnitus Association, is the “perception of near-continuous sound (or overlapping sounds) with well-defined frequencies”. In many cases, individuals experiencing tonal tinnitus can perceive fluctuating changes in volume over time.

Patients undergoing tinnitus treatment are often prescribed hearing aids and also undergo some type of noise or sound therapy to help reduce the intensity of their symptoms. However, unlike traditional sound therapy acoustic stimuli or noise, Notch Therapy is inaudible. This new, proprietary feature enables hearing care professionals to program hearing aids with a filtered “notch” centered at the pitch of the tinnitus.

According to a recent study (Strausse, et al, 2015), published in Clinical Otolaryngology, subjects with Notch Therapy activated in their hearing aids, compared with those that used hearing aids alone, showed a significant improvement within three weeks and maintained the benefit past six months.

How Does Tinnitus Notch Therapy Work?

For example, if the patient’s tinnitus is centered around 1,000 Hz, the hearing aids can be set to provide amplification for the patient according to their hearing loss across the frequency range, with the exception of at 1,000 Hz. This therapy technique utilizes cortical lateral inhibition, a neural mechanism that reduces the activity in the over-stimulated region of the brain responsible for many types of tinnitus, and has been shown in multiple clinical studies to be highly effective.

According to the company, this “this strategically placed spectral notch works to suppress tinnitus at its neurological source without restricting good hearing and speech comprehension” and thereby allows the brain to learn to disregard the tinnitus sound over time.

The new Notch Therapy approach to tinnitus is available in Signia primax hearing aids, which is offered in addition to the more traditional sound therapy options that are also available for activation within the fitting software.

According to the company, the hearing aids can be used to provide relief to tinnitus patients, with or without hearing loss.