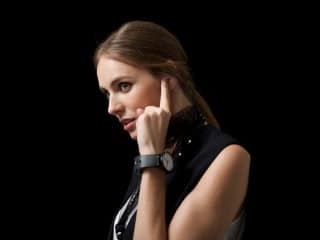 Innomdle Lab was one of the first startups businesses to come out of Samsung’s Creative Lab. Its TipTalk device initially debuted at CES and received a lot of buzz in 2016. Now the company say it’s ready to publicly launch its product to the market this summer under the name Sgnl.

The company’s fundraising campaign has raised more than $2 million dollars since its debut.

What is Sgnl and How Does it Work?

Through a specially designed “smart strap” attached to any type of watch (traditional or digital), Sgnl syncs to your phone and allows you to take calls and listen to music by placing a finger on your ear.

While the Sgnl device allows you to be smartphone-free when taking calls and streaming, it works in conjunction with the Sgnl App, which can be downloaded to your smartphone.

According to the latest from the company, the devices are anticipated to be publicly available in late summer 2017. Pre-orders of the Sgnl are currently available for $149.