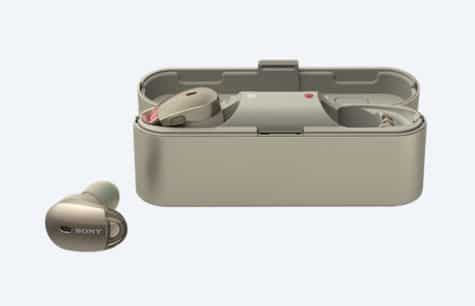 At this year’s European consumer electronics show (IFA) in Berlin, Sony unveiled its first truly wireless earbuds: the WF-1000X. Sony will now officially join an increasingly competitive hearable segment that continues to be dominated by Apple.

Sony’s new devices offer many of the same features of its competitors, such as the ability to adjust playback of music, take phone calls and adjust the listening experience via a custom app for iPhone or Android smartphone users.

Among the most touted feature of the WF-1000x is the noise reduction, which has received some early praise from reviewers. Sony’s Smart Listening feature helps automatically detects your activity such as traveling, walking, and waiting, then adjusts ambient sound settings. The Ambient Sound settings allows normal sound to pass into the devices when desired.

Sony says the battery life on the WF-1000x is expected to be about 3 hours, which is lower than major competitors. The battery case allows for 2 additional charges, for a total of 9 hours.

Pricing for the new hearable devices is listed at $199 USD, which makes the WF-1000x slightly more expensive than Apple’s AirPods.

The WF-1000x is currently available for pre-order at major retailers, such as Best Buy, Amazon and others.