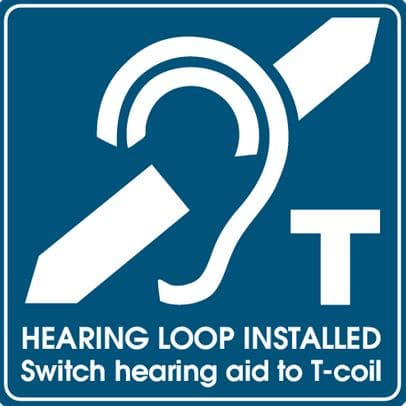 I have enormous respect and gratitude for the many fine, conscientious, caring hearing care professionals I’ve met over the years but there are some who, it appears to me, are either not up to date on an old but still invaluable technology – telecoils – or for some other unfathomable reason do not see its value in today’s technological world.

A long time acquaintance with a severe hearing loss recently told me of visits to two different local hearing care offices in quest of replacements to her aging hearing aids.  Having used telecoils and a room loop on her TV for the last several years she was surprised and disappointed: “They told me loops are on the way out and won’t help me hear.” She also knew that 10 years ago there was only one venue open to the public in Albuquerque that featured a hearing loop (a church) while today, with the inclusion of neckloops, it’s estimated there are several hundred.

I don’t have the training and knowledge to refute their claim that using a loop won’t help her hear but I do question its validity in light of the fact that she says she heard the TV better when she was using a room loop in her old apartment than she does using the mics in her hearing aids in her new one.

In light of the growing availability of hearing loops throughout not just the U.S. but much of Western Europe, Australia and many other developed countries, the claim that  “loops are on the way out” is simply not true and is either an example of being uninformed or of deliberately misleading a client. My hope in her case is that it was the former, but I know from conversations from hard of hearing folks from all over the U.S. that it’s not uncommon for hearing care providers to make that statement.

In 2012 the ADA added a requirement to its provisions, mandating that all new or upgraded assistive listening systems (ALS) must be hearing aid compatible. That is possible, with current technology, only by offering a neckloop option to users of FM or InfraRed systems or with room loops.

Theater chains, performing arts halls, legislative chambers and other places of assembly have, since that time, dramatically increased the number of venues where the hard of hearing can connect to the ALS simply by touching a button to activate the telecoils in their hearing aids.

Untold thousands of places of worship have installed hearing loops or added neckloops to their FM and IR systems. Some drug and grocery store chains have installed loops at at least one checkout counter in their stores and a growing number of airports, here and abroad, are now using the technology.  San Francisco’s Bay Area Rapid Transit system is ordering hearing loops in all of their new rail cars while New York City has looped over 600 information booths and ordered all new taxi cabs in the city to be equipped with hearing loops.  More and more hard of hearing homeowners are “looping” their TV room while a growing number of senior living facilities and senior single home developments are installing loop wires in the living room during construction.

Government facilities from the statehouses in Arizona and Rhode Island to the US Supreme Court have been looped in the last several years and two jurisdictions, New York City and the state of Minnesota, have recently enacted regulations mandating the use of hearing loops instead of FM or IR in places of assembly funded by public monies whenever feasible. Does all of this sound like a technology that’s “on the way out”?

Ten years ago Loop New Mexico was one of only three formally organized hearing loop advocacy campaigns in the country that this writer was aware of.  Today there are over three dozen of these consumer driven, nonprofit initiatives bolstered by national campaigns from both the Hearing Loss Association of America and by Sertoma.  A growing number of hearing care offices have added a section to their web sites devoted to hearing loop/telecoil technology.  Obviously, these advocates (consumers and hearing care professionals) see the technology just as I see it, as an enormous help to people with hearing loss when hearing aids alone cannot provide sufficient volume and clarity and Bluetooth® is simply incapable of providing the needed service.

Steve Frazier received formal training as a Hearing Loss Support Specialist from the Hearing Loss Association of America (HLAA) and has over 20 years of experience providing support and advocacy for those with hearing loss as a chapter and state HLAA leader. He chairs the award winning Loop New Mexico initiative and is a member of HLAA’s national Get in the Hearing Loop campaign task force and also their Hearing Loop Steering Committee. He sits on the New Mexico Speech-Language Pathology, Audiology and Hearing Aid Dispensing Practices Board and has had numerous hearing loss and noise control related articles published in a variety of magazines and newspapers throughout the U.S. including Hearing Loss Magazine, Church Executive Magazine, Technologies for Worship, Sound & Communications, Advance for Audiologists, the Christian Science Monitor and others.