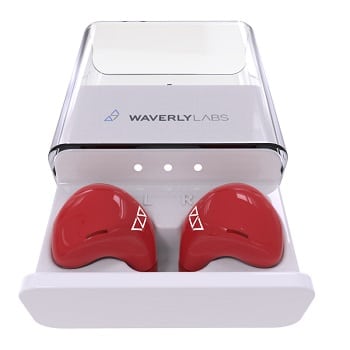 After raising nearly $4.5 million in an indiegogo campaign last June, more than $1 million than the Bragi Dash hearable did during its initial fundraising campaign, Waverly Labs is set to release its highly-anticipated hearable: Pilot. The Brooklyn-based company has dubbed the Pilot the “World’s first translating earpiece”.

The Pilot promises a high-tech solution to bridge the communication divide among people that speak different languages and has already received enough interest that the company has sold more than 22,000 units on pre-order.

Language Translating Hearable: How Does it Work?

Using a downloaded app (available free for iOS or Android), you and the person you’d like to speak with can sync your conversation through a matching QR code on the app. You then press a button on the app and as you speak, your speech is then picked up by the mics on the earpieces and then translated to text on the other person’s app. If the person you are speaking with also has the Pilot earpieces, they will hear an audio translated version of what you said to them.

The batteries are said to last 3 to 4 hours on a full charge and come with a carrying case that has an integrated battery for charging.

Like Bragi has done with its Dash devices, Waverly’s Pilot will be improved over time with periodic software updates that can be downloaded to a user’s smartphone or directly to the earpieces.

Pre-orders of the devices will come with free access to Latin/Romance languages (French, Italian, etc.) and the company is anticipating by the fall of 2017, users will be able to purchase additional languages, such as Arabic, Greek, Hindi and others.

The company claims its devices will be ready for a widespread release in late summer 2017. Currently prices are set at $299/pair.