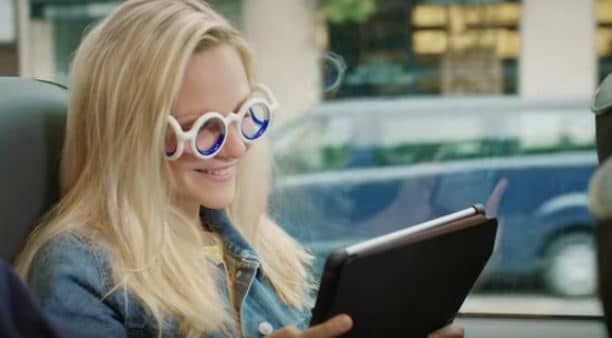 French automaker, Citroën, has taken a significant departure from automotive manufacturing with it’s latest innovation: Seetroën glasses. While the strange looking spectacles seem particularly odd coming from a car maker, the company claims they actually can improve your overall experience traveling in the car if you are one of the millions of people who suffer from motion sickness.

According to Citroën, by putting the glasses on as soon as symptoms begin, you should begin feeling better in about 10 minutes. Even if you wear regularly wear glasses, the Seetroëns can be worn over your prescription lenses.

While the source is still not entirely understood, the prevailing theory among scientists as to why some people get motion sickness is that our brains are receiving mixed or conflicting messages from the eyes and the inner ear during movement. These conflicting signals result in the symptoms we refer to as motion sickness.

So how do these weird glasses actually help?

According to the company, the glasses work through the use of Boarding RingTM technology–developed by a French Startup of the same name–which was licensed to Citroën. The glasses work by helping create a “virtual horizon” which is simulated via the liquid within each of the four rings, helping the wearer’s eyes match what their inner ear (vestibular system) is detecting.

“An artificial horizon is created on the periphery of the visual field, without disturbing the central vision. The eye thus has access to the reality of the movement again, the sensory conflict disappears instantaneously and the motion sickness disappears in a few minutes.”

The company says after 10 to 12 minutes of use, “the glasses enable the mind to resynchronise with the movement perceived by the inner ear while the eyes were focused on an immobile object such as a smartphone or a book. – Take the glasses off and enjoy the rest of your journey.”

Pricing and Availability of Seetroën glasses

Due to the (perhaps surprising) large demand, the devices—available through the company’s website—sold out quickly and are no longer available.

However, the company is currently taking preorders, and expects the next shipment to occur in September 2018. Pricing is set at €99 Euros, or approximately $115 US dollars.