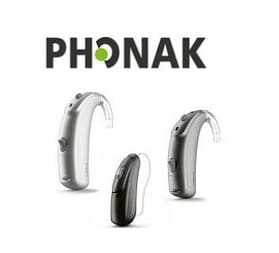 Swiss hearing aid manufacturer, Phonak, announced last week that they are expanding their latest-generation Belong platform with the new Naída B and Sky B hearing aids. Lithium-ion rechargeable options are also part of the expansion, including the Naída B-R RIC, Sky B-PR and CROS B-R (a solution for single-sided deafness).

“Around the world, hearing care professionals trust Phonak to deliver innovative hearing solutions that solve even the most challenging situations. Today Phonak builds on this legacy of trust by introducing products that redefine expectations in power, pediatrics and Roger connectivity. Our now-complete Belong platform portfolio means professionals have the flexibility to offer the industry’s most comprehensive rechargeable suite of hearing solutions to ensure the best possible care.” —Thomas Lang, Senior Vice President of Phonak Marketing

The Phonak Naída B is a hearing aid family designed for power users. Now in its 5th generation, product portfolio was specifically developed to address the unique and complex challenges faced by this client group. Now in its 5th generation, Phonak Naída B is said to offer “flexibility to meet these clients’ sound processing needs with an additional dedicated fitting formula – Adaptive Phonak Digital Contrast”.

For the first time, the Naída comes in a rechargeable Receiver-in-Canal (RIC) form factor, for users with severe to profound hearing loss.

For the pedatric client, Phonak’s new Sky B portfolio features AutoSense Sky OS and SoundRecover2. Additionally, a rechargeable option, Sky B-PR, is now available to give children a full day of uninterrupted hearing on a single charge.

When a microphone with MBT is placed on a table, it automatically selects the speaker to improve the speech understanding in group conversations and noisy situations.

The company also announced the release of the Roger Repeater, which extends the operating range of any Roger network in the Roger for Education portfolio and is said to be ideal for large school applications, such as auditoriums and gyms.