This week’s Hearing International features the legendary Steve McQueen – the “King of Cool” as he was known in his heyday in the 1960s and 70s.  His tumultuous childhood from very meager beginnings and his hearing loss shaped his life and relationships with others, including those closest to him.

With his blond hair, blazing blue eyes and chiseled features, his face was more eloquent than any of the lines written for him in his most famous hit movies, The Great Escape (1963), Bullitt (1968),

Getaway (1972) and The Thomas Crown Affair (1968).  Who could ever forget the chase scene from Bullitt between a ’68 Dodge Charger and a ’68 Mustang through the streets of San Francisco?  He made 27 films, beginning with a bit part in “Somebody up There Likes Me” (1956) about the life of the boxer Rocky Marciano.  His big break came in 1958 with a rather strange, inauspicious debut in a leading role with the movie “The Blob” (1958), playing Steve Andrews, an innocent young guy on lovers lane with his girlfriend, who battles a slimy space invader that comes to earth in a meteor  decimating and terrorizing a rural town in Pennsylvania. While not exactly the King of Cool debut, it got him noticed for television for a very successful television series, the 1958-61 CBS series “Wanted: Dead or Alive”.  McQueen later became one of the few early ’60s TV stars to successfully make the transfer back to a career in motion pictures. He had a raw yet gentle air that appealed to both male and female movie goers as a romantic hero and an adventurer.   McQueen fans like to believe that he was uncompromisingly macho, yet with a gentle heart.  Not exactly Steve McQueen the real person.

Steve McQueen was almost a recluse in private life, shunning parties, Hollywood socializing and other places where communication and interaction was necessary and there are a number of reasons for that behavior.  The short version of his childhood story is that he was born March 24, 1930 to a teenage prostitute, Jillian Crawford.  He never knew his real father, Terrance McQueen, a stuntman for a flying circus who deserted his mother six months after they met.  At about age 3, Steve’s mother abandoned him to live on a Missouri farm with a great-uncle for years at a time while she walked the streets of Los Angeles.  She would

occasionally feel guilty, relent and take him back for a while, then he would go back to the farm. By the age of nine he was being beaten so badly by his mother’s new husband that he took to sleeping on the streets of Los Angeles.

After running away to join a travelling circus, he eventually returned to the city where he joined a street gang. After stealing hubcaps when he was 14, he was sentenced to 18 months at the Boy’s Republic reform school, which he later credited for saving his life by “turning him around”.  He donated money and goods to the school anonymously throughout his lifetime. By 16, he was working as a ‘towel boy’ in a brothel, where he was encouraged to sample the goods whenever he pleased.  He enlisted in the Marine Corps  in 1947 and was stationed at Camp Lajune, North Carolina where he

worked as a tank driver and mechanic, spurring his lifelong interest in vehicles, especially motorcycles.  The three year stint in the Marines further toughened the young McQueen and he received a commendation for rescuing five Marines from a training accident.  After his time in the Corps,  surviving on menial jobs and shoplifting, a friend suggested acting school.  Since it seemed a good way of meeting pretty girls, he took advantage of GI Bill education benefits in 1952 to study at the Actors’ Studio in New York City.  Over the next 6 years or so he became a temperamental actor enjoying great success in television and movies. While successful in television and movies, his life is also an intriguing and lustful story of three torrid marriages, a philandering brush with Charles Manson, motorcycle racing, a fondness of conceal/carry guns and target practice, a true love for his children and a suspicious death November 7, 1980 in a cancer clinic in Santa Maria, Mexico.  But what about his hearing impairment……

“Deaf” in his left ear since about age 6 from the latent stages of otitis media, his hearing deficit was likely the result of childhood neglect and the lack of antibiotics in the 1930s.  In his left ear, an ear infection turned into a mastoiditis that plagued him throughout his life.   Mastoiditis is usually caused by a middle ear infection (acute otitis

media). The ear infection may spread from the ear itself into the mastoid bone of the skull. The mastoid bone is filled with “air cells” and has a honeycomb-like structure and, when infected, may deteriorate leading to permanent hearing loss. Mastoiditis usually affects children and, before antibiotics, it was one of the leading causes of death in children. Currently, it is relatively uncommon and much less dangerous condition but when present it may be difficult to treat as even today’s medications may not reach deep enough into the mastoid bone to clear the infection.  Even today the disease may require repeated or long-term treatment.  In McQueen’s time, the 1930s antibiotics had yet to be discovered and surgery was the usual treatment. The surgical intervention was to remove part of the bone and drain the mastoid (mastoidectomy) and was common among children of that time.  Also common was surgery to drain the middle ear through the eardrum (myringotomy)

to treat the middle ear infection.  While these procedures are still provided today, they were commonplace in the 1930s and it is safe to assume that McQueen probably had none of these options available due to the neglect.

Now we know that the complications of untreated mastoiditis is sensori-neural hearing loss, tinnitus, possibly vertigo which can persist for days at a time.  There is also evidence that at age 20, while scuba diving he ruptured his left eardrum adding to his hearing difficulties for the left ear. Between that and the residual from the mastoiditis, Lempert (2014) indicates that he was functionally deaf in his left ear.  Most audiologists would likely deduct from this hearing history that he had a significant conductive hearing loss from the mastoiditis and the eardrum rupture that to some extent probably turned into sensori-

neural in the latent stages.  This history could logically expect a 40-60 dBHTL hearing loss that was somewhat better in for high frequencies.  During most of his lifetime noise exposure was not considered a hearing health hazard.  While the left ear would have been somewhat sheltered by the conductive hearing loss, the right ear would have been exposed to noise from years of shooting, automobile, motorcycle and other unprotected hazardous noise activities well-known to create high frequency sensori-neural hearing loss, likely creating some high frequency hearing loss in the right ear for McQueen.

It is likely that he did not understand the speech of women, particularly from the left and in noisy situations and this issue would have been worse when trying to listen from a distance. Childhood notwithstanding, some of his overt behaviors on movie sets and in relationships could have been due to the hearing loss.  This could have contributed to the torrid relationships with women, who have high frequency voices that would have been more difficult to understand, and other people in his life. The hearing loss, high frequency voices, 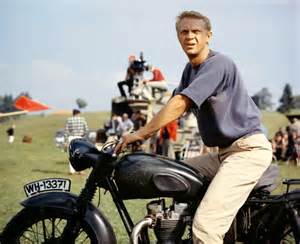 distance hearing often through noise could have led to misunderstandings at home and created some frustration on movie sets.  Considering the history and his reclusive behavior as well as communication in his close relationships, it is possible that this hearing loss may have contributed substantially to his overall behavior.

With his checkered childhood still fresh in his memory at age 33;   Mr. McQueen wrote: “When I did ‘The Great Escape,’ I kept thinking, if they were making a movie of my life, that’s what they’d call it – the great escape.”

Click on the pic to the right for the Motorcycle jump video.