April 6, 2018 marks the 7th anniversary of Hearing Health and Technology Matters.  It is fun to look back at some of the topics that we have explored together over the past few years.  As one of the original partners in the HHTM enterprise, it was a challenge in the beginning.  We did not know if colleagues

would accept the new blog…and blogging-what was that?  Was it a journal article?  A book chapter? A white paper?  Hardly knowing a blog from a PBJ sandwich, most of us premiered our first blogs that week of April 6, 2011 and all we knew was that it was a new medium that might or might not take off in our field.  It took us a few months to get into the swing of this new medium. 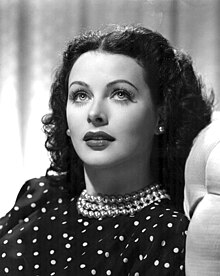 discussion of the invention of Bluetooth technology (Part I, Part II, & Part III), its history and where it came from.  One of my most “Ah-Ha” moments in doing the Hearing International blogs was the night I discovered that the real inventor of Bluetooth technology was none other than the actress Hedy Lamar!   Karl Strom even picked it up as a feature for their May 2012 issue of Hearing Review.  Wayne Staab, my fellow blogger at HHTM teamed up with Steve Armstrong to discuss the invention in detail,thus, her story is a thread that has woven through the HHTM blogs over the years and  is perfectly appropriate for an updated version to mark the 7th anniversary of Hearing Health and Technology Matters!  RMT

Originally published as part of a 3 part series in January of 2012, the story of Bluetooth technology seemed rather straightforward.  Named after popular Danish King Harald Gormsson, who was called Bluetooth by the Danes because he ate lot of bilberries (a relative of blueberries) and his teeth turned blue from the juice. Additionally, there were companies, such as Ericsson, IBM, Intel, Toshiba and Nokia,  that told all about what Bluetooth was, how it worked and where it came from, etc.  However, things are rarely what they seem.

As the story unfolded it turned out that the 1940s actress, Hedy Lamarr, was the actual co-inventor (with George Antheil, a jazz composer) of Bluetooth technology which later also led to, cell

phones, WI-FI and GPS.  In the 1940s who didn’t love Hedy Lamarr, the Austrian-born movie actress who starred in such classic movies as 1941’s Ziegfeld Girl or 1944’s Experiment Perilous?   Ms. Lamarr was phenomenally beautiful, intelligent, creative, witty, opinionated, passionate woman who believed strongly in cultivating inner strength. In addition to being a world famous movie star of the black & white screen, a wife and mother, she was a visionary inventor decades ahead of her time. At Hearing International, we think she has a place in audiological history.  She would fit right in with today’s women with such quotes is as, “Any girl can be glamorous. All you have to do is stand still and look stupid”  or “If you use your imagination, you can look at any actress and see her nude. I hope to make you use your imagination”….. and many other feisty quips not usually credited to women of her time.

Born Hedwig Eva Maria Kiesler on November 9, 1913 in Vienna, she was the daughter of a concert pianist and a banker. From childhood she was fascinated by the cinema and began acting at an early age and was a student at Max Reinhardt’s famous acting school in Berlin during her late teens. In 1933, she showed the world her acting skills and

most of herself in the film Extase (Ecstasy), which quickly became notorious for its extensive nude scenes. Although the movie did play in the United States it was only after many hot scenes ended up on the cutting room floor.  In 1937, she went to Hollywood where Louis B. Mayer, of MGM, hired her and gave her the name Lamarr.   She officially changed her name to Hedy Lamarr while starring in her first Hollywood film, Algiers (1938), opposite Charles Boyer. She continued to land parts opposite the most popular and talented actors of the day, including Spencer Tracy, Clark Gable and Jimmy Stewart. Some of her films include an adaptation of John Steinbeck’

s Tortilla Flat (1942), White Cargo (1942), Cecil B. DeMille’s Samson and Delilah (1949) and The Female Animal (1957). Some thought Hedy to be the most beautiful woman in Hollywood, but as an actress she was overshadowed by stars like Ingrid Bergman and Katharine Hepburn.

In 1966, she published her autobiography, Ecstacy and Me. One reviewer put it this way…..”An easy read, she’s no literary genius, but you have to admire her charming ambition, the innate confidence and the inflated ego…. if this was written in the 1990s there’d be a lot more detail about her nymphomania, bisexuality, kleptomania, art collection, husband collection, psychiatric turbulence, burgeoning acting talents and the behind-the-scenes Hollywood stories leave much to the reader’s imagination. However, in the late sixties, this autobiography was considered such a revelation on her lifestyle that she tried to prevent the publishers releasing the book. The style of this autobiography is a wink and a cheeky smile at the many moments of salaciousness.    “Need we say more?……………… Ms. Lamarr was definitely glamorous, but as the co-inventor of Bluetooth Technology, she was certainly not just standing still and looking stupid!

The Invention of the Century

The sinking of a cruise ship in 1940 by Nazi U-boats inspired the Austrian-born actress and her invention partner into action. They zeroed in on torpedoes, which were powerful weapons but hard to control.  While their twist on the idea was the one that came to fruition, he earliest consideration of this concept was actually Marconi in 1899 who experimented with frequency-selective reception in an attempt to minimize interference (Kahn, 2014). Another early consideration of “frequency hopping” was called “Method of Signaling” in the open literature in US patent 725,605 awarded to Nikola Tesla in March 17, 1903.  Tesla doesn’t mention the phrase “frequency hopping” directly, but certainly alludes to it in his patent describing a system that would enable radio communication without any danger of the signals or messages being disturbed, intercepted, interfered with in any way (EE Times, 2012).  It comes up again in radio pioneer Jonathan Zenneck’s book “Wireless Telegraphy” (German, 1908, English translation McGraw

Hill, 1915) and Zenneck himself indicates that Telefunken had already tried it. The German military even made limited use of frequency hopping for communication between fixed command points in World War I to prevent eavesdropping by British forces, who did not have the technology to follow the sequence (Winter, 1991).  And there were some others, so their idea was not new, but the application was different due to their perspective.

According to the EE Times (2012), the idea was not new but the concept of frequency hopping to prevent the intended target from jamming the controller’s transmissions was quite a breakthrough in application.  Rhodes (2011) says that she thought if torpedoes could be radio-guided, they would be more likely to hit their target.  Rhodes writes, “she understood that the problem with radio signals was that they could be jammed.”  But reasoned that if the signal could hop around more or less randomly from frequency to frequency, the person trying to jam it wouldn’t know where to find it.  Hence, says Rhodes, “If they try to jam one particular frequency, it might hit on one of its hops but would only be there for fraction of a second.”  Thus, her take on “spread-spectrum radio” was born.  Her partner, George Antheil chipped in with a

technique for synchronizing the frequency hopping between transmitter (in a plane flying over the torpedo) and the weapon.  It is probably no accident that Antheil’s musical training and experimentation with automated musical instruments generated a system using 88 different carrier frequencies, equal to the number of keys on a piano.

Their patent, enigmatically entitled “Secret Communication System” was granted on August 11, 1942.  According to Antheil, the radio-controlled torpedo idea never took off in part, because the patent mentions a piano as part of the explanation of how it works and the senior Navy staff, without bothering to read the whole patent, though that an actual piano would have to be fitted inside the weapon.,  Although Lamarr filed for a patent, there were some that could not accept that this gorgeous Hollywood star could invent anything, let alone this type of a weapon.  One engineer even suggested that she stole or plagiarized the idea.  Lamar seemed to be cursed by her beauty, which seemed to make it impossible for may to take her seriously.  At the time, their gift to the world went nowhere and the U.S. Navy, who filed it away, didn’t investigate the idea for 20 years until it was put into practice in October 1962 during the Cuban Missile Crisis blockade.  If the U.S. Navy wasn’t sufficiently appreciative, the rest of the world wasn’t so willing to ignore the non-acting talents of the woman who’d made the world safe for cell companies everywhere; i

n 1998, Wi-LAN bought 49% of Lamarr’s claim to the lapsed patent for an undisclosed sum, and Germany has been celebrating Inventors Day on Lamarr’s birthday, November 9, since 2005. Not bad for a woman whose largest contribution to the world had previously been considered to have been her looks during MGM’s Golden Age.

When inducted into the Electronic Frontier Foundation at age 84….her response was, “Well, it’s about time?