A HoH and Her Shiny New Bike 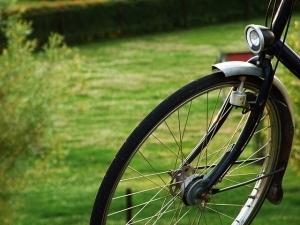 I have a shiny new bike.  It’s pale green and pretty and has 15 gears, although I don’t know what to do with 12 of them. It has a ringy-dingy bicycle bell which other riders can hear a mile away. But when I push the lever, I can only feel the vibrations. Even with my ear almost on top of the bell, I barely hear its extremely high pitch.

By now it should be clear that I’m not a triathlon-level cyclist. Aside from being un-athletic, I simply don’t like to ride fast. I’m afraid of wiping out and scraping myself all to bits. I’ve crashed when going at a casual pace, so I shudder at the thought of a gravel face-plant at 60 miles an hour.

Riding fast also means higher wind noise – a problem for every biker, but even more so for hearing aid users like me. The louder the wind noise, the less able we are to hear important sounds such as other vehicles, sirens, or a bear growling in the woods. A writer on the Internet, addressing the concerns of other cyclists about the potential for ‘ear turbulence’ to cause noise-induced hearing loss, suggested wearing thin headbands to protect ears from both noise and cold air. I’m going to try this – and hope that the tight fit won’t cause feedback from my hearing aids. (It’s a full-time job, trying to keep my hearing aids happy!)

Regardless of cycling speed and hearing ability, all cyclists must be visually alert when riding. Even at low speeds, I don’t always hear or make sense from out-of-sight sound cues that alert ‘hearing’ cyclists – the crunch of car wheels approaching from behind, a voice calling out, or a dog’s bark near the road. To compensate, as  I ride, I constantly check my rear view mirror and maintain a 360° neck-swivel on the lookout for danger. I also slow down when approaching street corners that are obscured by shrubbery that could mask the approach of other vehicles.   I sound like the model rider!

But things  become complicated when I go on bike rides with other people such as the Hearing Husband or my gal pals, because then we have to communicate. Let me tell you, as a person with hearing loss,  it’s no picnic riding single file with a group of chatty hearing people.

“Where are we going?”
“Should we turn here?”
“Does anyone have chardonnay in their water bottle?
Where’s the nearest loo….I’m hungry…I’m tired….

The lips of the person riding in front of me are hidden from view and their voice is sucked into the breeze. If they try talking with their head in profile, it’s not only dangerous but they can usually only manage a few words at a time – usually not long enough for me to get it – before they jerk their eyes back to the road. The person riding behind me may bellow a comment or a question, but by the time I turn my head to spit out a ‘pardon’, I have to turn my eyes back to the road, and so miss out on the response. Sometimes the others just talk over and around me;  I figure if it’s something urgent, someone will let me know.

Of course there some clear solutions to this issue. One is to agree, before setting out, what the bike route will be and that chit-chat will be kept to a minimum. This doesn’t always pan out, but it does remind my fellow Tour de France-ers that there’s a HoH (hard of hearing) rider in the pack. The other solution is to use the recognized biking hand signals that were drilled into us as kids – Left! Right! Stop!  Or you can create  a few unique hand signals of your own – Wait Up!  Back Off!  I’m Tired!  Look, There’s a Pub!

It has been suggested that I could warn drivers of my hearing issues by installing one of those tall flags on my bike that says “HoH Rider”, but I’m thinking that the optics wouldn’t be too good…you know?

Apologizing for playing into a stereotype of Dutch people and their bikes, I texted Wendelina Timmerman, a hearing loss friend from Holland, for tips on biking with hearing loss. Her experienced advice was to ride safely to prevent risks, keeping enough space from other traffic users. For Wendelina, riding with hearing loss has been an interesting opportunity to train all of her senses to work together. Last year, she got powerful new hearing aids which opened up a lot of new sounds – including that of her noisy bike. She now understands why people always made space for her when she was riding alone, and why they looked up when she rode by!

The Ida Institute, a hearing care professional think-tank based in Denmark, has an interesting blurb called Ears on Wheels, which urges communities to become more aware of cycling with hearing loss and for international cycling clubs to share their ideas on how to do this.

Me – I’m just a HoH who likes riding her shiny new bike with its ringy-dingy bell.  I want to to ride safely – perhaps it would help if I learned what all the other gears are for.