Hearing What the Bad Guys Say 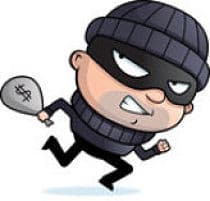 I have a recurring nightmare. Technically I suppose it’s not a nightmare because I fret about this while I’m awake, not when I’m sleeping.

I worry about being caught in a bank robbery – not doing the robbery, but being in the bank just when  Jesse James’ great-great-grandson decides to carry on the family trade.  When I’m nervous or agitated, my hearing tends to drop; people with hearing loss just don’t cope well in hold-ups.  Hearing people are much better at it.

To give you an idea of what we go through, here’s an excerpt from the opening monologue of my solo show, Unheard Voices. The setting is a noisy nightclub, where the main character is chatting with two strangers, whom she has just told about her hearing loss.

“….Excuse me? Did you just say ‘what’s the big deal’? Oh, it’s  not like this is serious or fatal?  Really.  How would you know?  What if I was walking down the street and didn’t hear the car coming up behind me? Isn’t THAT serious? Or – what if I was in the bank and these robber guys come in with huge automatic weapons and they make everybody lie down on the floor and one of the bad guys says, ‘I’m gonna shoot anybody who stands up!’  But all I hear is – ‘STAND UP!’  Think about it – wouldn’t you say that could be FATAL?  So don’t talk to me about ‘serious’, because you just don’t know….”

The thought still makes me weak at the knees. But here’s the good news: robberies at British, American and Canadian banks have fallen drastically due to several factors, including an aging population, less cash being held in banks, and modern police and security practices that make it more difficult to get away with crimes.

But I figure, why risk it? For a safe banking environment, nothing beats the chair in front of my computer. The Hearing Husband and I do almost all of our personal and business banking from the comfort of our own home. It’s faster and saves gas. It also eliminates possible communication challenges with bankers who prefer to talk to their computer screen than face me. I’m itching to try out a line the next time I do go to the bank: “I’ll show you the money – you show me the lips!”  (A note about online banking: even though live bank robberies have decreased, cyber-theft is rampant. Use the internet carefully and protect your passwords.)

But what if you find yourself in the same bank at the same time as a dimwit who hasn’t read the updated manual on how to rob financial institutions?  WikiHow offers some good tips on How to Survive a Bank Robbery. Not all of these pieces of advice, however, are helpful to those of us with hearing issues.

This would be tough. Do they mean calm as in not jumping around screaming “We’re all gonna die”?  I could probably manage that. If they mean calm as in chilling out – “Oh darn, I’m going to be late for my manicure”, that’s asking a bit much. I can guarantee that when I hit the floor, my heart rate will be through the roof, sweat will pour down my face and the last shreds of my hearing will go into lock-down. Either that, or my battery will conk out from the stress. But apparently you’re supposed to say calm and remember that the bad guys are interested primarily in the money, not hurting people.

#2 Cooperate with the robbers, and if you’re told to lie on the floor, or in any other position, do what they say.

Happy to oblige – but how am I supposed to understand what the bad guys are saying? If they’re nervous and stoked, they’ll be screamin’ and yellin’, and if there’s more than one, I’m sure they’re not interested in the one-person-speaks-at-a-time rule.  Also, they may be wearing masks and what bad guy is going to politely remove his mask so I can read his lips? It’s almost guaranteed I’m not going to understand these people!

I will have to rely on the tried-and-true method used by people with hearing loss, which is copy what everyone else does. If their hands go up in the air, mine are up. If they drop to the floor, I’m down. If they lie on the floor with their faces hidden in their arms, I am so in trouble!  Who can copy anything or anybody when they’re kissing the floor?  I’d be too frightened to peek, and would just remain face-down until the police eventually came to my rescue.

#3 Pay attention to details, which may be needed later to help police track down the robbers.

OK, so if I’m not face down, I will burn a physical description of the robber(s) onto my brain, including clothing and unusual characteristics such as a tattoo or scar or missing teeth. As a speechreader, I’d definitely notice the tooth, especially if it was missing from the front, and I would be sure to tell the police about this.  Picking up an accent would be tough; I’ll leave that detail to the hearing people.

People with hearing loss benefit from banking online.  But if you are short on cash, you might need to go to a real, live bank – and if you do,  the chances of being caught in a holdup are increasingly slim. Isn’t that nice to know?