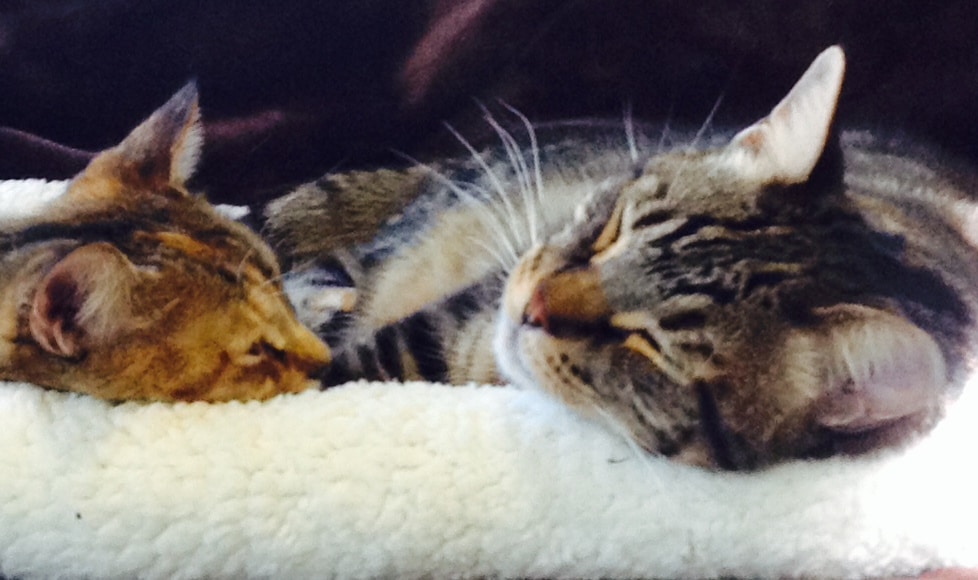 It was a road trip gone wrong. No, the car didn’t break down in the middle of nowhere and nobody got hurt. It was much much worse – there was a closed captioning crisis in our hotels!

The Hearing Husband and I were driving from British Columbia to meet family in Lake Tahoe. It was a scenic three-day, two-night and two-cat trip with Charlie, a 20 lb. hunk of Nellie-nervousness and 9-lb. Nickie who is fearless and curious.

Both cats intensely dislike traveling in the car and normally they ride on the bed in Flag, our 5th wheel which was waiting for us in San Jose, our next stop after Tahoe. So on this trip, they were less-than-happy campers, although personally, I think they were being over-picky in that feline way they have. What was to complain about? By day, they traveled in the back seat on top of their carriers watching the gorgeous scenery and by night, they stayed with us in comfy, pet-friendly hotels.

Our first stop was Wilsonville, Oregon. The hotel was adequate and for a $15 extra charge, the cats had full run of the room. But when we kicked up our heels to watch TV, there was no closed captioning (CC)—the standard accessibility for people with hearing loss which is mandated by the Americans with Disabilities Act. There was a CC button on the remote, but it didn’t relate to anything in the TV.  In fact, the only things I could control were the volume and the channel.

The Hearing Husband called the front desk; the girl said she’d look into it and get back to us right away. After 20 minutes I started getting anxious; it was Sunday and Downton Abbey was coming on at 9:00pm and it was now 8:40. I called back.

“Mrs. Hannan in room 134.  How’s it coming with the closed captioning issue?”

“Ma’am,  I don’t even know what closed captioning IS – and the maintenance guy doesn’t know what it is, either!”

(I took a moment to mentally compose a patient answer.)

“It’s the words that come on the screen that help people with hearing loss understand what’s being said. It’s the law, you’re supposed to have it.  Can you bring me another TV set, like now?”

“All our TV sets are the same!”

“Really?  ALL of them are like this? The remote has a CC button on it that must relate to something, don’t you think?”

Ten minutes later, I walk over to the office.  Downton Abbey was about to start.

“You can fill out a complaint form to our manager who isn’t here right now.”

“But I AM here right now and I want to watch TV. (I realize I’m not going to win this.) Look, do you have an HDMI cable that can hook my computer to the TV so I can at least watch Netflix? The WiFi is strong enough, I hope?”

“Oh yes, I watch Netflix here all day long. (She gets on the walkie talkie). “Hey Joe, bring an HDMI cable to room 134 right away.  OK, he’ll be there in 15 minutes, guaranteed.”

Joe never arrived, so we read and played with the cats. I also wrote a nice email to the hotel manager explaining what happened. Still waiting for a response.

Next night, another pet friendly hotel in Klamath Falls, a ranch town in southeastern Oregon. I quickly dumped the cats out of their carriers onto the floor and rushed to check out the TV captioning.

It was there – except that you couldn’t see it. The size of the picture was too big for the TV and we could just glimpse the tops of the words at the bottom of the screen. We tried everything to adjust the picture but ended up calling the office. Jaime arrived in a flash—what a guy! Way better than the phantom Joe in Wilsonville. Jaime tried all the same adjustments that we did—after we showed him how the remote worked and what the different buttons meant. Sigh, what a guy.

Lucky for us, not all the TVs in Klamath Falls were ‘the same’. We gathered up our cats and bags and moved to the room next door where the TV and captioning worked like a charm. Unfortunately, Downton Abbey is not repeated on Mondays and  I still don’t know what happened on that episode (and don’t anyone dare tell me). Charlie and I watched the news instead.

Checking out the next morning, I expressed my gratitude to the three staff on duty, along with a mini-tutorial on captioning and hearing loss and why I could talk to them but can’t understand TV without ‘the words’. Hopefully, the next families with pets and hearing loss passing through Wilsonville or Klamath Falls will find that the cats and I have paved the way for them.