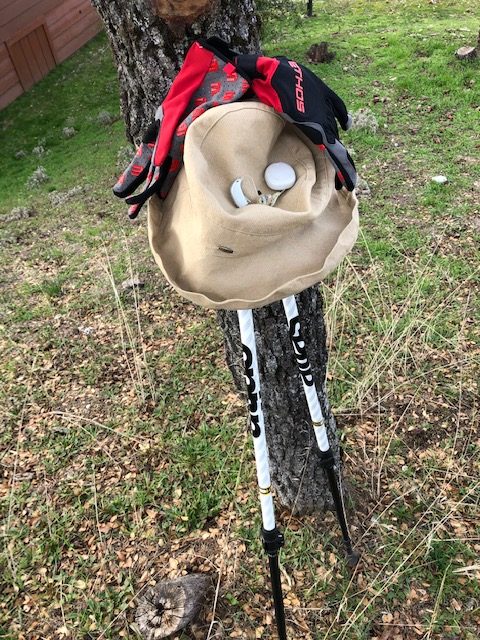 I don’t do sports, or what most people consider to be sports. It’s not that I don’t like sports, it’s more that they don’t like me.

When swinging a baseball bat, the ball consistently flies half a foot above or below the bat. So annoying.  Golf was a possibility but if by some divine fluke I hit a ball into the air or into the distance, I would lose sight of it almost immediately. Not only that, I narrowly escaped a serious spinal injury when I was 9. I was walking around the course with my golfing parents and I didn’t hear the cry of “Fore!” coming from far behind us. In the same moment that I was wondering why my parents were hunching over, BAM! A golf ball hit me hard in the middle of my back. It was years before they could get me back on a golf course. Seemed to me that people with hearing loss were better off avoiding the links.

But I enjoy hiking and in my book, it’s a sport. It uses most of your muscle groups and you don’t have to worry about a golf ball hitting you in the head. Right now, the Hearing Husband and I are based at his son’s place in the hills of Santa Clara near San Jose and for the past week, I’ve been enjoying my favourite new sport that I call Hike ‘n’ Hear. After a couple of setbacks due to severe tinnitus, my cochlear implant and I are back on track hearing and identifying new sounds.

The area is perfect for jogging or pole walking, with low traffic and great views. I used to jog ‘deaf’ in my Toronto neighborhood because it was both peaceful and free of the static the electrical wires caused in my telecoils when I tried to listen to music. I felt safe, because I was also hyper-alert to the crash danger from cars, bikers and other people. But I missed the sounds of nature.

I am bimodal, which means I use a hearing aid on one side (the left) and a cochlear implant on my right side. The hearing aid gives me normal sounding speech but flunks out on the higher frequencies. My CI, however, detects those high frequencies, giving me sounds that I’d either forgotten or never knew existed. I hear the highest peeps of little bird peeps but bigger birds aren’t as crystal-clear, more like a very fast thwap-thwap-thwapping, but at least I hear them.

I set off on a 4.28 kilometer route (2.66 miles in American), which was largely straight up and straight down. However, the view was spectacular and my cochlear implant had a few surprises for me. As I climbed what seemed like steep stairways to the jaws of death, I heard a strange sound coming from the woods on the other side of the road. It repeated several times with about 10 seconds between. It didn’t have the mechanical sound of a car and if it was a bird, it was one hell of a big one. It sounded more like the first part of a Viking herding call (listen here to one). Then came some loud rustling (I could never hear ‘rustling’ before) and I saw a wild boar running down through the woods to join his friends who were, mercifully, sealed off from the road by a high chain fence. Turns out that wild boars are common in the area, descendants of the early Spanish explorers, and who now live by rooting up the lawns of Santa Clara.

The next gift from my CI was simply that I could hear my breathing. This was good, because the sound of my ragged breath, ragged but strong, told me I was still alive and not about to die of exertion.

On the way back down, I walked on the safe side facing traffic, and using my CI-given ability to hear the distinct sound of cars coming in either direction. But the narrow road had no shoulders and when I approached a sharp bend, I would move to the other side, so that an oncoming driver wouldn’t have a heart attack rounding the bend to find me a mere foot from the car. This worked well most of the time. As I rounded one particular bend, the car coming on the other side of the road slowed to a crawl and I couldn’t understand why. I turned to see a car right behind me, almost on top of me. I almost had a heart attack. Turns out it was an electric car which is almost quiet, especially at low speeds.

That was the only negative moment in the day’s Hike ‘n’ Hear. The sounds of nature are almost too many and too beautiful to describe, and I thank both my cochlear implant and my hearing aid for giving them to me.