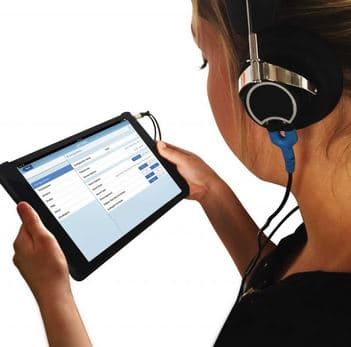 Like most clinical tests, audiometry produces only a snapshot of a single point in time. For that single moment, you know the truth, but only for that one moment.  Unfortunately, many diseases are either fluctuating or progressive in nature and these snapshots can be misleading and must therefore be understood in a broader clinical context.

A recent patient of mine had an unusual situation with profound unilateral sensorineural deafness and a contralateral ear with a condition called ‘Auto-Immune Inner Ear Disease’1. His ability to hear in his good ear would change, sometimes quite dramatically, over the course of any given day. These fluctuations meant that any audiogram performed produced results that were relatively uninformative.  As such, he struggled in school and was not helped by traditional hearing aids. Initially, we tried standard therapy by treating him with medications and injectable steroids, and attempted effective aural rehabilitation with variable-fit hearing aids. However, after several months it occurred to us that daily audiograms were the only way to gain clarity into his disease process.

The suggestion of daily audiograms may have initially sounded ridiculous to our colleagues. How could we possibly expect a daily audiogram from either the clinic or the family? The patient was in his early teens and his parents both worked, he attended school, and was active in several after school activities. It was unreasonable to think they could take time out of their schedules to travel the 10+ miles from where they lived to my clinic at the hospital. We concluded that home audiometry was the only solution to obtain sufficiently detailed information on his fluctuating condition.

To make this happen, we needed two things. First, a portable audiometer that the patient could take home, and second, a test simple enough to be used by someone not skilled in the art of audiometry.

We elected to send him home with one of our mobile tablet audiometers called SHOEBOX Audiometry2–4. With a little bit of training, we showed him how to use the platform and over the course of a few months he self-administered more than 70 hearing tests, producing a diagnostic audiogram that he sent to me daily by email.

He still visited the clinic on several occasions for routine follow up and adjustment of his hearing aids. At these appointments, we also conducted hearing tests in a sound chamber using conventional testing equipment.

Interestingly, the process of daily testing had a profound impact on both him and us.  The daily audiograms provided insight to him on how his day was going to go.  Prior to this information, he would only become acutely aware of his condition when experiencing problems.  However, now he was always ready to face challenges by knowing his hearing thresholds in advance.  From our point of view, we now also had the ability to look very closely at exactly how widely, and how often his hearing fluctuated.  It was remarkable, to say the least. His hearing sometimes fluctuated by as much as 70 dB in less than 24 hours. It was no wonder that he had had such a difficult time with hearing aids.

After seeing the wild fluctuations over the course of several months, and after failing conservative therapy we elected to recommend a unilateral cochlear implant on his deaf side to help normalize his hearing. This recommendation was outside normal candidacy criteria given that on some days he had near-normal hearing.  Nevertheless we proceeded and now, since his surgery, he has stable hearing in one ear and fluctuating hearing in the other. This is a much-improved situation for him.

Regular home audiograms enabled a day-to-day evaluation of his hearing loss that helped us understand and treat his condition. Further, we were able to document the reliability of his home audiograms against our clinical testing during his regular visits. We found that hospital-based audiograms correlated very closely with his home audiograms and have since published these findings in the Journal of Otolaryngology5.

There are several other disease processes where it may be useful to conduct regular home audiometry. In particular, patients with Meniere’s Disease also suffer fluctuating hearing loss and we know very little about the course, severity, frequency and progress of this condition. Furthermore, the impact of our surgical otological interventions is not well understood on a day-to-day basis. For example, how long can we expect it to take for hearing to normalize following a myringotomy and tube? Similarly, following tympanoplasty, or mastoidectomy, or any other otologic surgery the normal progress of hearing return is not well understood. Daily hearing testing could easily clarify normative values and help us identify abnormal outliers early in the postoperative period.

Finally, we could learn so much more about patients with progressive diseases such as genetic hearing loss, enlarged vestibular aqueduct syndrome, progressive sensorineural hearing loss, ototoxicity, presbycusis, and the list goes on and on.

Home hearing testing requires a portable audiometer with a calibrated headset and a system that is easy enough to be used reliably by laypersons. It is now time to start answering some long-standing questions about hearing loss and treating these conditions with confidence.  Our patients deserve more than a snapshot, they deserve a deep understanding of their clinical context.

Dr. Matthew Bromwich is an Associate Professor at the University of Ottawa in the Department of Otolaryngology and has been a pediatric surgeon at the Children’s Hospital of Eastern Ontario since July 2009. He completed his medical training at Queen’s University, followed by a surgical residency at the London Health Sciences Centre and a Fellowship at the Cincinnati Children’s Hospital Medical Centre in pediatric airway reconstruction. He has published 25 papers and four book chapters on Otolaryngology.  Dr. Bromwich is the inventor of several medical devices and holds 4 patents on various products in Canada and the U.S. Other research endeavors include treatments for dizziness, mobile hearing testing, video endoscopy and surgical airway reconstruction.  His research aims to democratize access to medical care by delivering innovative and inexpensive solutions.