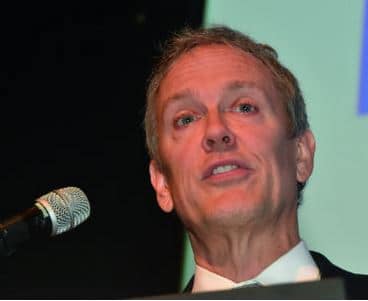 by Stéphane Davoine, editor in chief of Audiology Infos Brazil

Vice-president of global medical affairs at GN ReSound and a former president of the American Academy of Audiology, David Fabry gave several lectures at the XIV Encontro International sobre próteses auditivas, last June in São Paulo, Brazil. He also answered The questions of Audiology Infos Brazil about some hot topics, among them: the Characteristics and the importance for the hearing aid market of the boomers generation, Accessibility and psap/otc devices, and the future of the profession of audiology.

During your talks, you emphasized several times the American Baby Boomers, to which extent is this group making an impact on the hearing aid market?

In the US, the “baby boomers”- born between 1946-1964 – are turning 70 at the rate of 10,000 everyday! So if you look at the total number of hearing aids sold in the US and consider this number of 10,000 persons turning every day of the year into our target age, and even with the current adoption rate of only 20 to 25%, that means that the market organically because of the aging of the population will potentially grow around 4% per year for the next decade. In comparison, Brazil is a very young country, so you’re not seeing this impact yet. Another fundamental difference with the US is that two thirds of the market is public and roughly one third is private. In Brazil, if you have hearing loss you can get hearing aids, while in the US that’s only the case for children, veterans, and those with low income. But for many adults, that’s not economically possible.

These are the reason for the current PSAP and OTC discussion in the US. What is your position about these options?

Because of low penetration and average selling prices among the highest in the world, the Government, through the National Institute of Deafness and Communication Disorders and other bodies like National Academy of Sciences, decided to improve accessibility and affordability through PSAP, and now, potentially, OTC devices.

While no one would argue against accessibility and affordability to increase hearing aid adoption, we should not sacrifice patient safety and efficacy.

PSAP are outside medical devices category and are therefore exempt from FDA regulations. OTC will be regulated, and I hope similarly to hearing aids they will ensure labeling clearly identifies that these devices are for adults, among other things to prevent unintended consequences from their use.

I firmly believe that PSAP and OTC serve a role for patients who have the technical capability to fit themselves. However, what we’ve seen with “made for iPhone” hearing aids, whose the fitting is done by professionals, but that have the capacity for self-adjustments, is that very few patients actually employ that self-adjustment feature; to me, that says something: the oldest patients that are current hearing aid patients haven’t really embraced self-fitting.

What feedback can we get from countries with OTC devices?

Japan and South Korea have OTC devices. But, you can’t compare one market to another. In Japan, for instance, binaural fitting rate reaches only 39%, much less than in the US and European countries. In Japan, the introduction of OTC meant more hearing aids being fitted, however the user’s satisfaction is quite low. What we see is that, even in those few countries with an OTC model, the hearing aid market hasn’t been destroyed.

On the other hand, there hasn’t been a market where the introduction of accessible and affordable options has dramatically raised market penetration. But, it may eventually happen in the US because of what I call the “perfect storm”, the impact of technology, of demographics – with the boomers, and telehealth and distribution aspects. Many of us who have been here for a long time may say “ok we’ve seen this before”, but this time could be different because of this unique combination.

In this perspective, are PSAP and OTC hearing aid a possible entry for hearing care?

Yes, absolutely. The only issue that I have with these devices – and this is a personal belief, not a ReSound position – is that if we create OTC and we regulate this category to ensure consistency of response conforming to something comparable to an ANSI standard, then, first and foremost, we “do no harm”. Medical devices have to conform to certain manufacturing specifications, for instance to ensure that people are not being exposed to excessive radiation or inconsistency of output or gain. Even if we say they are not going to exceed 120 dB in a standard, you have still variability that exceed what an ANSI standard does, that’s a problem because that can lead to damaging levels of sound. The first goal in creating a self-delivery model is to ensure good manufacture policy and consistency of response from one device to the next, the same we are doing with hearing aids. The other overlay is whether it is self-delivered or professional delivered.

Although we’ve already had a tool to allow self-modification, after professional fitting, what we’ve seen is the vast majority of current hearing aid users aren’t employing that self-fitting, they want the role of professional.

Larry Humes, who lectured here at the EIPA, did a study that shows that both consumer-driven and audiology-driven models result in hearing aids that benefit people. The benefit is more from the audiology-driven model, but we can do better by providing more clinician-patient engagement. Eventually, the entire issue is really on the shoulder of the industry to keep making better technology and on the professionals to identify the needs of the patients, and as long as we all focus on the need of the patients first, instead of our self-interest.

Why have hearing aid user’s satisfaction rates been growing over the last decade and, at the same time, penetration has remained steady?

I think the cause is the remaining stigma, not cost, because in Denmark, United Kingdom or even in Brazil, hearing aids are provided “free” of charge and still we don’t have a 100% adoption rate. To be fair and introspective, maybe some people don’t see the benefits of amplification. Those with mild losses want help in a couple of specific situations, but don’t need it full time, that may limit the overall adoption. And for some, of course, there is a stigma associated with hearing loss and the use of hearing aids.

Any evidence that would support the notion of increase adoption for hearing aid use either for starter devices if they end up creating something like that, as long as safety first, I think it’s our collective goal and we, the practitioners, have to change the way we’re doing things and recognize that the competition increasingly has come, not only within the current big hearing aids manufacturers, but other consumer electronics groups too. They force us to get better.

Going back to the boomers, how might the relationship between this group and technology in general affect hearing aid acceptance?

The stigma of hearing loss is still there. However, with the number of hearable devices that people are wearing for wireless, streaming and a number of different applications, a younger patient who is not seeing a “hearing aid”, but a device that can help to remain more and more in touch, monitor body functions or activity levels, stream music or audio, maybe inclined to entering the market a little sooner.

Boomers will use hearing assistance technology as long as they meet – or exceed – their expectations. We have higher expectations than our parents, but if it meets our needs, provides us with augmented reality by being able to stream TV, I’m going to use it and I might use it earlier than my parents.

Could you tell us more about this link you make between hearing aids, virtual reality and augmented reality?

Some years ago, we tried to create virtual reality in the hearing aid industry by having acoustic environments that could simulate real world situations… We had all these sound systems that were capable of surround sound and create for instance a restaurant or a car environment… But if we can actually be in the car through teleaudiology, it is better because that’s the real environment, that’s not “virtual” reality.

Furthermore, we have had “augmented reality” at our fingertips for decades, first with FM transmitters, and now with Bluetooth-enabled remote microphones. If the microphone is transmitted to the hearing aid, in a noisy and reverberant environment in a place of worship or lecture hall, to the degree that the residual hearing allows it, then we can give the hard of hearing patients the opportunity to perform as well or even better than a normal hearing counterpart. That’s augmented reality, we’re giving them the possibility to outperform a normal person!

Finally, in this period of growing importance of customer-driven models, how do you see the future of the profession of audiology?

I think that, some of the young clinicians attending the EIPA might see during their professional life the advent of hair cell regeneration, even though we don’t know when such a breakthrough may occur. However, since and it’s going to be far from perfect, and because hair cell has to connect to neurological function, that doesn’t mean the end of our profession. A similar example is optometry, in the 1990, when the field saw Lasik treatments becoming popular and when professionals had to emphasize more the services part. In this perspective, hair cell regeneration may be an opportunity for the audiologist to assist in the diagnosis, treatment, follow-up and all the needed rehabilitation.

Also, we, at ReSound, have a partnership with Cochlear Corporation focused on bimodal amplification, and this is an example among plenty of opportunities to anchor the profession on the medical side, whether it’s cochlear implant, middle ear implants or bone anchored hearing aids, whether it’s hair cell regeneration or vestibular treatments. Tinnitus is a huge issue around the world too, and we might see medical treatment in a not so distant future, that could involve the audiologist in diagnosis, management and follow-up of tinnitus patients as well.

Actually, the future is really as big as our imagination and our looking at our scope of practice is! We’re not physicians, we’re not able to prescribe medications, but there’s plenty of work for all of us.

In looking at the entire spectrum of the care, from over-the-counter device to medical side, including all of the aspects I mentioned, I’m not worried about finding enough things to do!

Editor’s Note: By mutual agreement,  this article is republished with permission from Audiology World News, where it originally appeared on October 27, 2017.