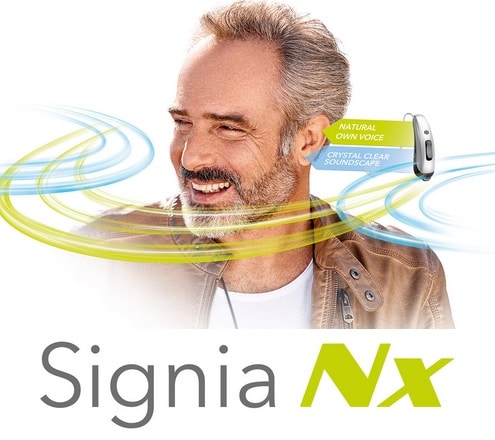 Sivantos has announced the release of its Signia Nx hearing aid instrument family, which incorporates the company’s new Own Voice Processing (OVPTM) system. According to the company, the new Signia Nx technology uses a high speed classifier system that “ensures soundscape and own voice processing work in parallel to replicate natural sound perception”.

Powered by Signia’s Ultra HD e2e binaural system, the Nx’s microphone system identifies the sound path of the wearer’s voice as it travels to the hearing aids. The aids can identify the wearer’s own voice apart from all other voices via unique characteristics, to then process it independently from all other sounds. According to the company, this allows hearing professionals to fine-tune the hearing aids without having to compromise audibility in order to improve the sound quality of the wearer’s own voice.

Using the newly developed algorithms in the Nx platform, the hearing aid’s classification system also scans and locates sound in the listening environment to help improve spatial awareness and localization.

According to Sivantos, the Nx’s new chip delivers processing power equivalent to 500 MIPS (million instructions per second). The company says this fast chip speed is key to its classification system’s ability to quickly and automatically drive needed hearing aid features in a variety of listening situations.

All three Nx hearing aid models can use the myControl™ app 2.0. In addition to other features, the app offers remote control capability, along with 360º microphone steering. Users of the app can adjust program and volume, sound, power on delay, low battery interval, and airplane mode.

The company said the new Signia Nx family of instruments, in 7nx, 5 nx, and 3 nx technology levels, will be available starting in November 2017.