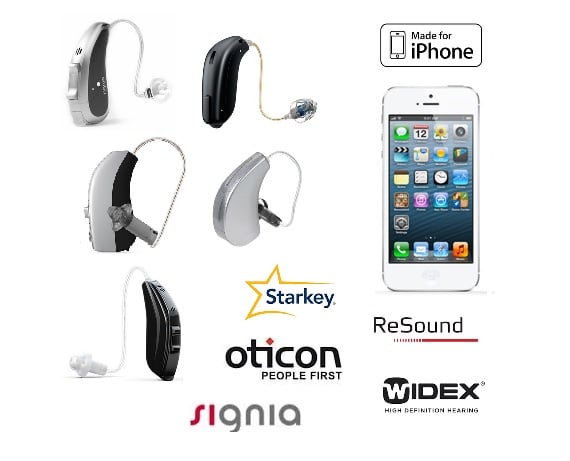 After Sivantos announced the launch of their first “Made for iPhone” hearing aids, the Signia Pure 13BT devices, the company joined the ranks of other major hearing aid manufacturers offering 2.4GHz-enabled hearing aids.

While most hearing aid manufacturers have developed their own proprietary wireless systems over the years, the 2.4GHz system that was first adopted and widely promoted by GN ReSound and Starkey has now become an industry standard.

According to the announcement, Signia says the new aids will be based on the primax platform, and will have compatibility with the TeleCare 3.0 application, which allows users to connect remotely to their audiologist.

Made for iPhone Hearing Aids: A Review

Having been one of the trailblazers in offering “Made for iPhone” hearing aids, GN ReSound now includes the technology in nearly all styles of its instruments, with its latest generation of 2.4GHz enabled hearing aids: Linx2 and Enzo2.

The Linx2 family of Made for iPhone hearing aids come in 3 technology offerings: Mid, Advanced and Premium (5, 7 and 9).

ReSound’s Enzo2 hearing aids are Super Power BTE instruments, intended for those with severe-to-profound hearing loss. They are also compatible with the Smart App, which is available for Apple and Android devices.

9/21/17 Update: GN ReSound launched their new Linx 3D and Enzo 3D devices in the latter half of 2017. These devices are compatible with ReSound Assist, which allows users to have access to remote fine-tuning adjustments via an app downloaded to their smartphone.

Starkey, along with GN ReSound, was one of the very first companies to offer 2.4GHz enabled hearing aids, with its Halo device. The Starkey Halo 2 is the company’s latest generation of Made for iPhone devices. 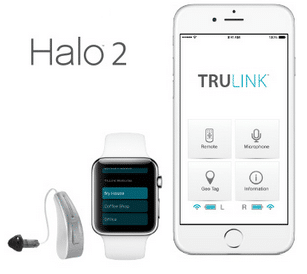 The Halo 2 is a Receiver-In-Canal (RIC) instrument that comes in two sizes: RIC 13 and RIC 312. It’s compatible with iPhone, iPad, iPod Touch and the iWatch, using the TruLink Hearing Control App. The App is also available for Android phones as well.

9/21/17 Update: Starkey launched their new iQ product family in August of this year, including the new Halo iQ.  The technology behind the Halo iQ is said to have been inspired, in part, by virtual reality research.

Oticon released the Opn hearing aid in the middle of 2016, using a “dual-radio” approach, that is said to offer the battery saving benefit of NFMI and also the desired connectivity options provided by 2.4GHz technology. 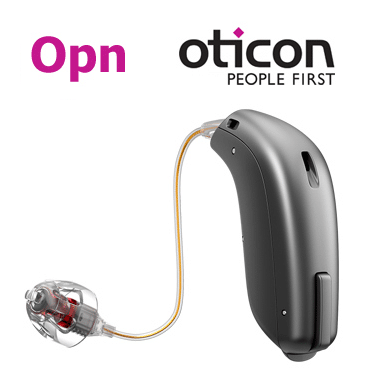 One particularly unique feature of the Oticon Opn hearing aids is the ability to connect to the Internet of Things (IoT) using the IFTTT web service. This will allow the hearing aids to connect to a growing number of internet-connected devices, including doorbells, smoke alarms, baby monitors and a number of other devices.

The Opn is currently available in mid, advanced and premium technology levels: Opn 1, Opn 2 and Opn 3.

Widex launched their Beyond platform at the end of 2016 which, like competitor Oticon, keeps their own proprietary wireless system in place for hearing aid communication, but also offers 2.4GHz for device streaming.  The company says this allows them to have a much lower battery consumption when compared to competitors in the industry.

The Beyond App is available for Apple and Android phones.

Phonak Made for iPhone?

So far Sonova, parent company to Phonak, Unitron and Hansaton, is the only major hearing aid manufacturer that has yet to release a “Made for iPhone” hearing aid.

Responding to criticism from analysts and investors, Sonova announced in fall of 2015 that it would be introducing 2.4GHz functionality in its hearing aids “in late 2016 or early 2017”. However, the company has not yet released any further information on expected launch date of a new device incorporating the technology.

Industry insiders and analysts believe that it’s likely the company will be introducing a 2.4GHz product in the latter half of 2017.

9/21/17 Update: Phonak confirmed the rumors this August and officially unveiled the Audeo B-Direct hearing aid–which not only can direct stream from an iPhone, but unlike any of its competitors, the aids will also connect to Android devices as well. Additionally, the new Audeo B-Direct are reportedly able to connect to classic phones via the Bluetooth connection.