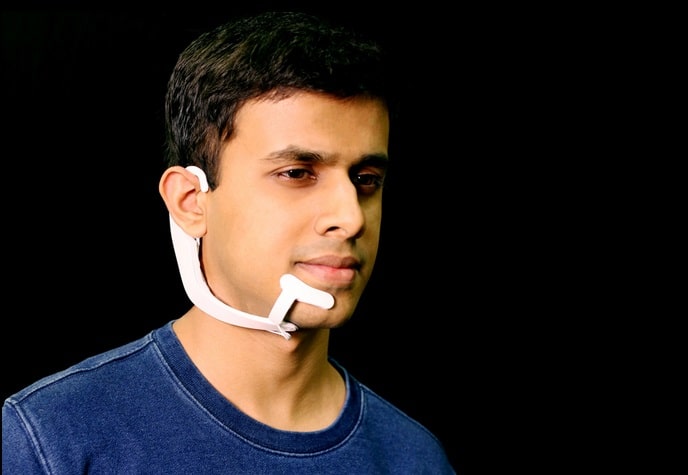 Researchers from Massachusetts Institute of Technology (MIT) Media Lab have developed a computer interface device that can transcribe words that the user verbalizes internally but does not actually speak aloud. As Daniel Van Boom from CNET describes it, “When you think a sentence in your head, your brain sends signals to your mouth and jaw. MIT Media Lab’s headset reads those signals with 92 percent accuracy.”

The system consists of a wearable device and an associated computing system. The system uses electrodes that detect the neuromuscular signals in the jaw and face triggered by so-called internal verbalizations (saying words “in your head”) that are not detectable by the human eye. The signals received by the device are fed to a machine-learning system which has been trained to correlate certain signals with particular words.

Connected to the device are bone-conduction headphones, which transmit sound via vibrations through the bones of the face to the inner ear. By not obstructing the ear canal, the user is able to carry on normal conversation and hear surrounding sound.

“The motivation for this was to build an IA device — an intelligence-augmentation device,” says Arnav Kapur, a graduate student at the MIT Media Lab, who led the development of the new system. “Our idea was: Could we have a computing platform that’s more internal, that melds human and machine in some ways and that feels like an internal extension of our own cognition?”

Among many possible future applications for the technology as it develops include use with people who are unable to vocalize speech due to medical conditions or disability, industrial applications, and stealth military operations.