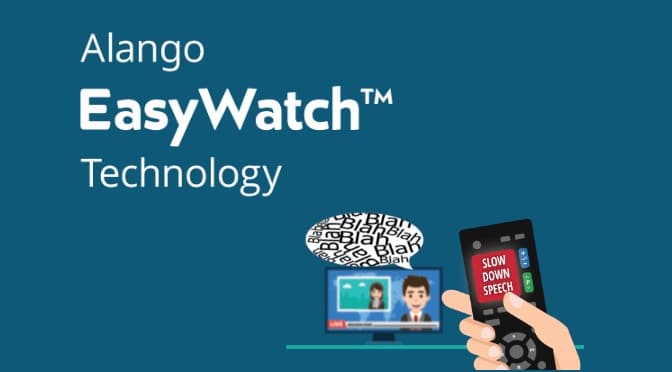 EasyWatch is a new technology from Alango that personalizes the TV watching experience to enhance intelligibility of dialogue: the video is slowed to match the pace of the audio, maintaining synchronization of the audio and video streams.

Alango EasyWatch technology has been developed to address a common complaint among television watchers: difficulty understanding speech in TV programs. Several factors may contribute to this, including hearing ability, speech-to-noise ratio, overwhelming sound effects, TV-room acoustics, TV audio set-up, and muddled or accented speech. This is further complicated by the fact that different programs or movies have distinct acoustic profiles or are in a foreign language, which results in fluctuating intelligibility. With so many variables it befits TV manufacturers to offer features allowing TV viewers to personalize the audio to enhance cognition.

EasyWatch is designed to improve intelligibility of speech for all viewers , and especially those with impaired auditory or cognitive function.

You have probably experienced the slowing or speeding of video playback since many on-line streaming services allow the user to change the playback speed relative to the original video speed. Such a feature slows down the video and then correspondingly slows the audio. In other words, video is the master and audio the slave.

The downside with this approach is that audio content is not analyzed and processed according to its individual constituents; silence, noise, and music are treated with equal merit to voice. Slowing down the video/audio stream using this method does not improve intelligibility. In fact, it might harm auditory comprehension. For instance, an arbitrary speed adjustment in the music and other non-speech segments might produce artifacts or annoying distortions.

EasyWatch treats audio as the master and video as the slave. As a result, the speech itself can be slowed without slowing irrelevant audio segments, such as silence or noise. Humans are more sensitive to audio artifacts than video artifacts. With EasyWatch audio is the master, allowing for several possible modifications of the audio/video stream:

Furthermore, the algorithm will only slow down audio and voice segments where there is no danger of producing artifacts. This real-time analysis and processing technology performs sophisticated speech analysis and stretches only those parts that are important for auditory comprehension.

**For interested readers, you can download the EasyWatch Player here, a hands-on technology demo that enables EasyWatch processing on your own video files.

Excessively fast speech is not the only culprit spoiling TV dialog intelligibility. Extreme sound effects are an ominous villain dead set on fatiguing the viewer and undermining comprehension of movies, shows, and sporting events.
Alango Sound Effect Normalization (SEN) technology has been developed to improve speech intelligibility by de-emphasizing background sounds and music (learn more about SEN here).
People have recently been compelled to spend a lot of time at home for work and leisure. Screen time is increasing. TV OEMs should see increased demand for their products. Alango hopes these OEMs consider the value of offering advanced features to improve the auditory comprehension of their customers , leading to increased enjoyment of the TV watching experience overall.
Source: Alango
2020-07-20
HHTM