We recently had the opportunity to take a closer look at the Neosensory Buzz, a wrist-worn device that allows you to feel sound as vibration and also connect with one of its creators, renowned neuroscientist and Neosensory CEO, Dr. David Eagleman. 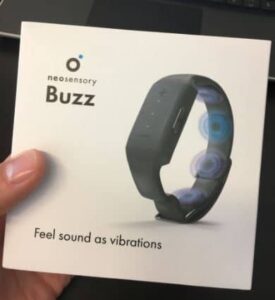 Buzz is intended for “deaf and hard-of-hearing individuals, musicians, app developers, and others who want to create unique sensory experiences.”

The scientific foundations behind Buzz, can be seen in Dr. Eagleman’s 2015 TED Talk: Can we create new senses for humans?

In what began several years ago with the development of the VEST device (Versatile Extra-Sensory Transducer), a project that was documented by David Kirkwood in 2015, the concept of creating a ‘sensory substitution device’ developed further into the recently released Buzz wearable.

Experience wearing the device is quite unique. While at first it might seem comparable to a cell phone vibrating on your wrist, over time you can pick up the nuances to certain sounds. Door slams, snapping fingers and one-one-one conversations all offered a unique vibratory pattern.

The intensity level of different sounds begins to come through more distinctly after you wear Buzz for a period of time as your brain begins to adapt. The sensitivity level can be adjusted using the +/- keys on the faceplate (or in the app) for those that desire more or less vibration.

Interestingly, the four vibration motors found on the inside of the wristband offer different vibrational patterns–according to the company, it has the ability to create over 4 billion unique patterns and the current algorithms use over 29,000 different patterns based on a sound’s intensity and pitch.

“With this technology, people can easily come to understand the auditory world around them, based on data coming in through the skin,” said Dr. Eagleman. “It doesn’t matter the route by which information comes to the brain. As long as it gets there, the brain will figure it out.”

At the suggestion of Dr. Eagleman, we used a simple online tone generator to present different frequencies of sound. A clear difference in the vibration pattern by changing the frequency of the tone was observed and one could imagine that this could be especially useful in helping a wearer differentiate certain types of sounds as they got accustomed to wearing it.

Further, for those looking to customize their experience with Buzz, the app provides the ability to freely adjust the response between 350 Hz and close to 8 kHz. 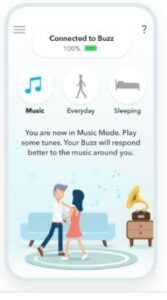 Buzz’s companion app allows users to switch modes to optimize for everyday sounds, or for listening to music, or for sleeping safely at night knowing they can feel vibrations of emergency alarms.

It also allows them to modify settings such as frequency range and strength of vibration.

Within the app menu, wearers have the ability to go through a series of training exercises, to help them better distinguish between different types of sounds.

According to Dr. Eagleman, Buzz was created with an open API platform for developers to “build custom apps and vibrations” to expand the sensory experience (further information can be found at neosensory.com/developers).

The Neosensory app is available for iOS and Android platforms.

Buzz is a unique wearable device that can provide real benefits to those who are deaf and hard-of-hearing.

While many hearing professionals are likely unaware of devices like Buzz, these types of ‘sensory substitution devices’ have the potential to serve as helpful additions to hearing aids or cochlear implants. Hearing professionals may well consider recommending these types of devices, as they could provide some additional context to the wearer–particularly among those with severe and profound hearing losses and those with significant word discrimination difficulties.

Buzz is available for $799 on the company’s website: https://neosensory.com/product/buzz