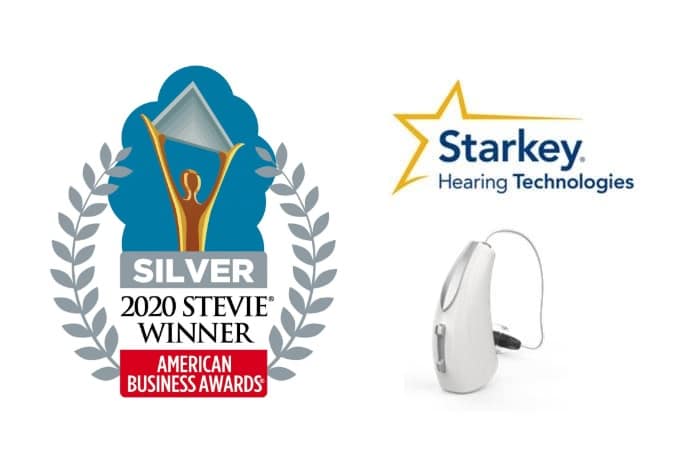 Created in 2002 and judged by 200 executives across the U.S., the Stevie® Awards recognize excellence in the workplace. During the evaluation process, judges noted, “The list of features of Livio AI is astounding. Starkey is taking great steps towards more inclusive living for hearing impaired individuals.”

A gateway to understanding a patient’s overall wellbeing, the ear is increasingly being recognized as a highly effective place to measure key health indicators. Taking advantage of this knowledge, Starkey launched Livio AI, boasting a wide range of features and benefits. It is the world’s first and only hearing aid to utilize artificial intelligence and integrated sensors to provide superior sound quality and the ability to track both body and brain health.

““Allowing people to more proactively control their health was a crucial addition to our devices. Mounting evidence shows treatment of hearing loss with hearing aids can help prevent serious health issues such as cardiovascular disease and dementia. We are proud to be paving the way forward in hearing health technology, and we are humbled by this recognition.”

In 2019, Starkey added a variety of new features that continue to deliver on the promise of helping people hear and live better. They include fall detection, voice-to-text transcription and direct streaming. Details about The American Business Awards and the list of 2020 Stevie Award winners are available at www.StevieAwards.com/ABA.

Starkey is a privately held, global hearing technology company headquartered in Eden Prairie, Minnesota. Founded by Bill Austin in 1967, Starkey is known for its innovative design, development and distribution of comprehensive digital hearing systems. Led today by President Brandon Sawalich, Starkey is the only American-owned provider of hearing technologies. The company has more than 6,000 employees, operates 26+ facilities and does business in more than 100 markets worldwide.