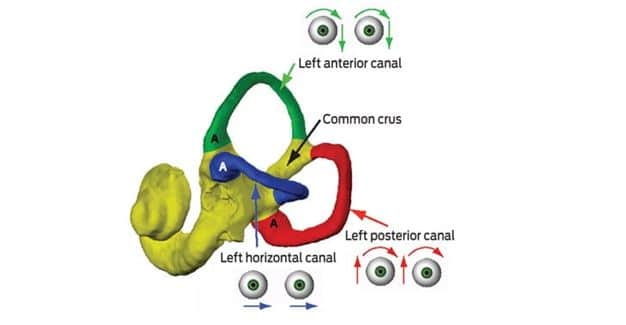 The anatomy of the labyrinth is such that loose otoconia particles naturally gravitate into the posterior canal when the patient is supine. In order for the particles to enter the anterior canal (also known as the superior canal), the head has to be almost upside down.

The anterior canal in one ear lies in the same plane as the posterior canal of the opposite ear. These planes are often described based on the involved pair of canals. For example, when the head is turned to the left and the eyes are directed forward, a vertical nod of the head will stimulate the right anterior canal and the left posterior canal simultaneously. This is known as the RALP plane (Right Anterior, Left Posterior). Conversely, the same vertical nod with the head turned to the right will stimulate the LARP plane (Left Anterior, Right Posterior).

The point here is that when you do a right Dix-Hallpike exam with the intention of stimulating the right posterior canal, you are also simultaneously stimulating the left anterior canal. Particles in either canal can trigger vertigo and a nystagmus response.

*Photo courtesy of the Medical Journal of Australia.