How Hearing Aid Technology Has Evolved in Society, and Why — Part V 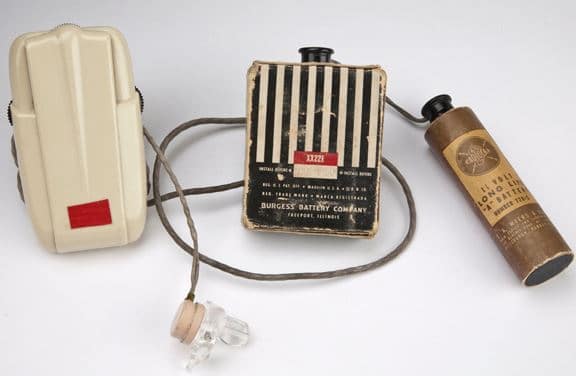 Editor’s Note: Today’s post continues the discussion by Abigail Farmer and Bruno Sarda on the evolution of hearing aid technology .

A more recent development introduced in 2003, the Receiver-in-Canal (RIC) hearing aid, has proven disruptive to the modern hearing aid market. This innovation has taken Behind-the-Ear (BTE) hearing aids from about 15% market penetration in 2003 to about 50% in 2014.1

There are many more innovations that could be discussed here but for the lack of space. One such innovation, whose history is rich and controversial enough to fill many pages on its own, is the cochlear implant. This technology is aimed at a more severely hearing-impaired market and likely displaces sign language more than the traditional hearing aid, plus it relies on a different set of scientific principles than hearing aids. For this reason, we are excluding this technology from the scope of our inquiry.

As mentioned throughout, a critical technology that evolved in parallel with—along the way influencing and being influenced by—hearing aids was battery technology, for which key milestones were the introduction of the zinc carbon battery in 1866, Thomas Edison’s alkaline battery in 1901 and the mercury battery in 1940, followed by the development of cells starting with the mercury cell in 1947 and the alkaline cell in 1949, to the silver-oxide cell in 1960 which yielded much more power, followed by rechargeable Nickel-Cadmium cells in 1970.

The latest advances for hearing aids include mercury-free zinc-air cells along with nickel-metal hybrid cells both introduced in 2008.2

An important policy that had a significant impact on batteries took effect during WWII when the War Production Board mandated that batteries could only be produced in certain standardized sizes.3 Prior to that, batteries came in unique sizes, which made it cumbersome and expensive to buy replacements, which impacted hearing aid users more than most civilians.

Innovation in battery technology has been directly linked to innovation in, and resulting adoption of, hearing aids. In fact, Eric Hintz argued that the “button” mercury battery not only preceded the transistor but “was just as important, if not more so, for the progress of miniaturization”.4

As evidenced by this rich history, it is clear that the possibility of enhancing human hearing inspired many gifted inventors, scientists and engineers, and that the history of hearing aid development is closely intertwined with the development of some of the most significant innovations of the first half of the 20th century.

As science historian Mara Mills aptly concludes, “hearing aids, particularly in their evolution as “small telephone systems” in the 20th century, provided a site for the development and testing of miniaturized components and assembly techniques as early as 1900.”5 She further advances that it is therefore difficult to understand “the obduracy of the stigma that adheres to the technology itself—when hearing aids have otherwise represented the leading edge of personal electronics.”6 The next section explores explore this stigma and the broader socio-cultural context that helps explain it.

“We have learned that technologies emerge from social systems, that they reflect and internalize power relations and cultural assumptions. We recognize that social systems are actually techno-social systems” – Sarewitz, Technology in the Culture of Progress

A good deal of our society is premised on everyone’s having full hearing. Movie theaters do not show movies with same-language subtitles, most warnings are delivered via sirens, and family dynamics, difficult to navigate on their own, are made even more complex when not all parties have full hearing abilities.This reality makes hearing loss a sensitive topic for many.

Modern society has a problem with imperfection. It is not enough to correct a problem; the solution must be elegant and invisible. Eyesight is corrected with lasers, not coke-bottle glasses.

Celebrities get plastic surgery to shrink noses and zap wrinkles—and then deny having had the surgeries. Even dental braces have gone invisible. Society has come to expect a “fix” for everything.

The stigma takes three main forms, all of which relate to each other in some measure: alteration in self-perception, ageism, and vanity.12

Changes in self-perception relates not only to how individuals with hearing loss view themselves, but how they believe others will view them.13 Unlike vision problems, which can be corrected with eyeglasses, individuals view admitting to having hearing loss as changing their identity from whole to not-whole, able to disabled, and even smart to cognitively impaired.14 As a result, individuals will often fake hearing, sometimes with embarrassing results.15

Bruno Sarda is a leading practitioner in the field of corporate sustainability at Dell, where he’s worked since 2005. In his role as Director of Social Responsibility, he leads the company’s strategy on social aspects of sustainability, including human rights and labor practices, working with internal and external stakeholders. He also manages Dell’s groundbreaking partnership with Phoenix-based TGen (Translational Genomics Research Institute) to accelerate adoption of precision medicine in addressing childhood cancer. In addition, Sarda is an adjunct faculty member and Senior Sustainability Scholar at Arizona State University, where he teaches and helped design and launch the Executive Master’s for Sustainability Leadership working with the Rob and Melani Walton Sustainability Solutions Initiatives at ASU.