How Hearing Aid Technology Has Evolved in Society, and Why — Part III

Editor’s Note: Today’s post continues a discussion on the evolution of hearing aid technology by Abigail Farmer and Bruno Sarda.

Electrified hearing devices appeared around 1900, following the inventions some twenty years earlier of carbon microphones by Thomas Edison and the telephone by Alexander Graham Bell. Electrical hearing aids were actually the primary technology platform for the miniaturization of components and compact assembly before World War II. After the war, hearing aids became the first consumer market for printed circuits, transistors, and integrated circuits. Due to stigma surrounding hearing loss, hearing impaired individuals wanted small or even invisible devices.1 But deaf and hard of hearing people, as well as those who loved them, were not just early adopters of new hearing aid technologies, they were also often the inventors, retailers, and manufacturers of miniaturized electronics.2

The first electric hearing aid, called the Akouphone, was developed by Miller Reese Hutchison in 1898. His interest in this topic stemmed from having seen a childhood friend lose his hearing from scarlet fever. As a result, in addition to his training as an electrical engineer, Hutchison also took classes at the Medical College of Alabama to study the anatomy of the human ear.3 The Akouphone used a carbon transmitter and electrical current to amplify audio signals. A key downside was that it was not portable, as its users were tetheredto a bulky tabletop machine.4 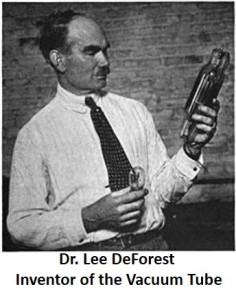 The vacuum tube, appearing at the start of the 20th century, was a technological breakthrough for hearing aids that would dominate the hearing aid market until the transistor displaced it. The vacuum tube itself was developed through a set of incremental scientific and technology innovations derived from Edison’s studying the flow of electrons and led to John Ambrose Fleming’s first vacuum tube (1904) that “looked at dots and dashes of Morse Code” for Italian inventor Marconi, and Dr. Lee DeForest’s invention of the triode, a three element vacuum tube in 1906, also called the ‘Grid Audion’.5

The triode was the key to amplification in general, and for hearing aids specifically. DeForest placed a grid between the filament and plate, which allowed for control of electron flow by varying the grid voltage. This controlling feature is called amplification.6

There was actually quite a controversy as to who between Flemming and DeForest was the inventor of the vacuum tube. Although Fleming is credited with the science of it, DeForest turned it into technology by enabling the control of signals through the tube.7

More than fifteen years after the introduction of Fleming’s original vacuum tube, the first vacuum-tube hearing aid was patented by Naval engineer Earl Hanson in 1920. It was called the Vactuphone‑still a bulky table-top hearing aid‑and used a telephone transmitter to turn speech into electrical signals.8 Hanson was a radio engineer, first for the Bureau of Steamships and later for the US Navy. Hanson’s interest in this civilian application was motivated by the fact that his mother was deaf.9

The cost for a new Vactuphone in 1921, produced by Western Electric, was $135, clearly out of reach for most of the population at that time.10 Interestingly, it was marketed as a device that enhanced hearing rather than restored it, as demonstrated by this advertisement in the Globe: 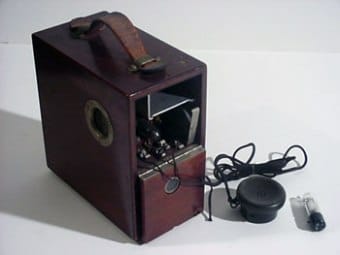 “Listen to distortionless speech and hear sounds that even normal and healthy ears have not heard since the world began.”11 These claims were not lost on the government: in 1924, the US Secret Service requested, and was granted, approval to use the Vactuphone for its operations.12

AT&T launched its own hearing aid development program in 1922. H. Fletcher, the director of speech and hearing studies at AT&T, was personally connected to this topic. His own father was deaf, and he served for many years as the President of the New York League for the Hard of Hearing.13

Soon after, AT&T’s subsidiary Western Electric began manufacturing vacuum-tube hearing aids. Their first commercial device weighed 220 pounds and sold for $5,000. Within a year, Western Electric had reduced the size of the device down to 35 pounds and it could be transported in a suitcase since it now included batteries.14

This was derived from work Western Electric had done for the US Army in WWI to develop “trench sets” of smaller vacuum tubes. These devices were now becoming portable, like Acousticon’s Model 56, one of the first portable hearing aid units, which was introduced in the mid-1920s but was still quite heavy.15 By the end of 1924, Western Electric had achieved a seven-pound Audiphone portable device.16 Most of the hearing aid R&D activity during the 1920’s focused on carbon microphone and vacuum improvements in order to address internal noise and frequency responses, as evidenced by patent activity such as those obtained by Tillyer and Kranz in 1923 and 1928.17

These technological advances were complemented by increasing activism by the hard of hearing in the 1920’s and 1930’s, including many who had not previously considered wearing hearing aids. By the late 1920’s, hearing aid sales in the US exceeded 100,000 annually.18

Bruno Sarda is a leading practitioner in the field of corporate sustainability at Dell, where he’s worked since 2005. In his role as Director of Social Responsibility, he leads the company’s strategy on social aspects of sustainability, including human rights and labor practices, working with internal and external stakeholders. He also manages Dell’s groundbreaking partnership with Phoenix-based TGen (Translational Genomics Research Institute) to accelerate adoption of precision medicine in addressing childhood cancer. In addition, Sarda is an adjunct faculty member and Senior Sustainability Scholar at Arizona State University, where he teaches and helped design and launch the Executive Master’s for Sustainability Leadership working with the Rob and Melani Walton Sustainability Solutions Initiatives at ASU.