Music recording for audiologists – Part I

This is the first in a series of blogs outlining some of what we know about optimal music recording.  When reading through these blogs one should be struck that we really know everything we need to know already when it comes to recording.  In some cases, what was learned in our first year audiology class provided  “obvious” recording cues (such as ensuring a wide bandwidth) and in other cases, the information and concepts have been learned but may have applied to other fields than music recording.

The first question concerning recording musical instruments is where to put the microphone(s).

The answer is not really straight forward and anyone who goes to a live show will see differing microphone locations and orientations.  To some extent, it depends on the goal of the recording facility.  Is it just for amplification, or perhaps the re-creation of the original sound?  Let’s deal with the “amplification” goal in this blog, and the other goal(s) will be assessed in future blogs.

Amplification implies that the microphone(s) are relatively near the output of the sound generator.  This is not always easy to accomplish.  For brass musicians, the optimal location is facing the bell of the instrument with the orientation being directly down the sound bore.  This will ensure that the mid to higher frequency sounds are optimally recorded since they are highly directional.  Using a microphone off-center will miss out on some of these higher frequency harmonics.  In contrast, lower frequency sounds emanate from all parts of the brass instrument so if the goal is merely to pick up only the lower frequency fundamental energy, then placing the microphone anywhere should be sufficient.  If you desire to amplify the full range, having it pick up sound centrally makes the most sense. 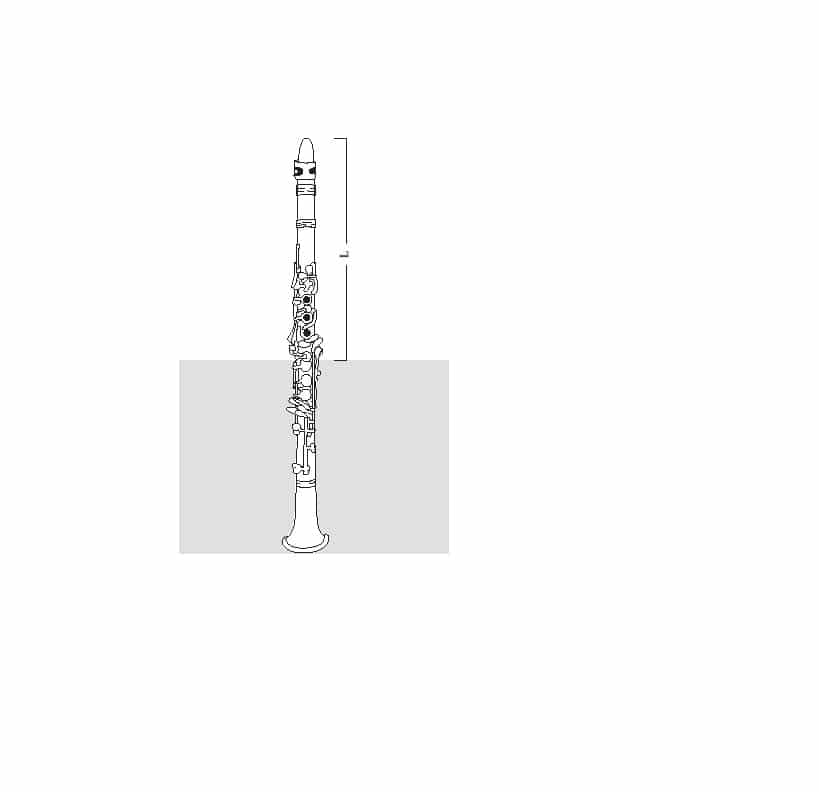 Woodwinds are a different animal acoustically speaking.  Sounds emanate from the first non-covered hole.  If the musician is playing middle C (in the lower register or G in the higher register), then all sounds emanate from the fourth hole from the top and the effective length is shown by “L”.  Having a microphone over (or near) the first uncovered hole would be optimal, but only for middle C (and a twelfth above it, high G, just above the treble clef)).  If the clarinet player were playing the lowest note on the clarinet (low E, the space below three lines beneath the treble clef), then all of the sound would emanate from the bell at the very bottom.  The optimal microphone location has now changed to a position beneath the clarinet.

Clearly no one location would be ideal for a woodwind player and that is true for the clarinet, saxophone, flute, oboe, bassoon or piccolo.  Alternatively many sound engineers just measure the sound from the instrument at a location of several meters to obtain a result that has significant incident sound and minimal (but not zero) reverberant sound.

The same issue arises with stringed instruments- plucked and bowed.  Guitars and violin strings have the largest amplitude displacement at exactly half way between the bridge and the top of the neck, and as the strings are articulated on the neck, this point changes.  No one position will be optimal if one is looking for the maximum lateral displacement of the string.  Nevertheless there are other factors with stringed instruments (that also rear their heads with other instrumental resonators, but to a lesser extent) and this has to do with the formant pattern of the body of the instrument itself.  Certain instruments have a natural resonance (or resonances) that are related to its volume and other mechano-acoustic properties of the body.  Having a microphone situated to pick up these inherently more intense regions of resonance on the body of the stringed instrument will certainly increase the signal to noise ratio, but like the string issue (and first open hole issue with woodwinds), it may not be ergonomically feasible to situate a microphone (or electro-acoustic pickup) in an “acoustically optimal” location.

A strategy that has been used by many recording engineers is to measure the sound of a group of instruments (in a symphony) or in the vicinity of one or two instruments but with a distance of several meters.  This can be combined with some really neat processing that can recreate a more spatial feel.

For example, in a symphony, trumpet players are at the rear, clarinet players are in the middle, and violin players are at the front.  Assuming that a back wall exists somewhere behind the trumpet players, because of the close proximity, there is minimal reverberation from the trumpet section.  That is, the sound emanates from the trumpet and goes outward with virtually nothing for it to reflect on.  The clarinets (being about half way up to the front of the orchestra) generate a sound and also one would hear the reflection of their sound off the back wall added to their incident sound.  A sound engineer may add 20 -30 msec of delay in their measured sound and combine it with the incident sound.  Continuing further forward in the orchestra, the violin sound would have a 50 msec delay added to the initial sound, and so on.  The net result is that a “one dimensional” recording becomes a two dimensional one, just by the addition of some well-defined reverberation.

The “acoustically optimal” location for a recording microphone is rarely ergonomically feasible and it may vary depending on the note being played.  Modifications that “delude” the listener into thinking that the recorded music is in their living room, such as well-chosen reverberation numbers, can go a long way towards making a recording sound more pleasant and musical.

Next week’s blog will be all about different microphones that are being used in the recording of music.