Hallowe’en again, a year after Hearing Economics uncovered the under-served but growing zombie population.  For a while it seemed as though it was all for nothing, what with the world scheduled to end on 12/21/12 as part of a zombie apocalypse.  That didn’t happen, which is a good thing for Audiologists and hearing aid sales.  Also for Zombies, who/which had a banner year with 53 stellar movie releases, including one with Brad Pitt and another with the classic title “Grave of the Zombie Antelope,” also a new series premiering on the Sundance channel on October 31st.  Zombies are alive and with us, sort of,  for the foreseeable future. 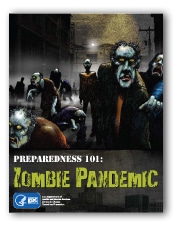 Zombies shot to the top of the food chain (left) and got top billing at the  Centers for Disease Control (right). Zombies do teachable moments and have their own blog site at the CDC.  There’s just something about zombies.

And you heard it here first.  To date, there is little progress in zombie hearing and vestibular research. That’s a shame because this group is unique for two auditory-neural characteristics:

1)  They cannot regenerate hair cells in vitro or in vivo.

The zombie hearing aid market remains ripe for the picking and zombies’ global popularity adds luster to any practice:

“These days, if you want to sell something, you add zombies.”

Yes, yes we do!  Here’s a repeat of last year’s zombie post to help in that endeavor.

Zombies are a value stock. They are wordless and oozing and brain dead, but they’re an ever-expanding market with no glass ceiling. Zombies are a target-rich environment, literally and figuratively.{{1}}[[1]] Why Modern Life Feels Rather Undead[[1]]

No doubt about it, zombies are a target market for a number of goods and services, but one that Audiologists have thus far failed to exploit in our efforts to grow hearing healthcare.  In this Hallowe’en post, Hearing Economics hopes to correct that oversight by providing readers with sufficient information to convince them that zombies are a rich, growing market for our products, if not our direct services.

More than those with functioning brains, zombies are especially dependent on their senses because their brain function is rudimentary. IUCS{{2}}[[2]]A shadowy group representing itself as ‘… a non-governmental policy institute whose primary directive is to assess, analyze, and distribute intelligence on the efficient neutralization of undead threats that present a substantial and grave risk to the human race’.[[2]] reports in its unfortunately-named Zombie Combat Manual that:

“research studies and other published works have already established that the senses of the undead are highly developed and more fully utilized than they are in humans.  Although a zombie does not possess any elevated or enhanced perception in any of its five senses, it uses all of them to maximum effect for the sole purpose of hunting prey.”

Zombie research is strictly empirical and does not paint a pretty picture for this disadvantaged group.  The sad state of sensory processing and aging in Zombies is paraphrased from the Federal Vampire and Zombie Agency{{3}}[[3]]You knew there’d be a Government Agency for this.[[3]] .

Smell:   Zombies’ powerful sense of smell compensates for the weakness of their other senses.  Zombies have even more receptor cells than vampires. If the wind is right, zombies can smell humans from as far as several miles away.

Sight: Due to degradation of their corneas, zombies suffer from severe myopia. In addition, they are color blind.

Hearing: Zombies go deaf within a few weeks of transformation. Efforts to rehabilitate them through ASL training have thus far proved unsuccessful.

Touch:  Not much, see Stages I-III below and accompanying illustration.

Aging:  A long-held, common misconception is that zombies are immortal. In fact, the vast majority of zombies live less than one year. It is possible to determine a zombie’s age based on their external appearance; specifically, their level of decomposition, also known as necrotic degradation.

Stage I: The skin is mottled and covered with open sores.

Stage II: The ears and nose are rotting away. Loss of fingers and toes.

The Case for Fitting Zombies with Hearing Aids

First and foremost, 100% of zombies need hearing aids, as opposed to that 20% of hearing-impaired humans who perceive a need every 5 years of so.  Every zombie is a sale and it’s an annual event!  Plus, every one of these special needs folks needs our help fast — they are not going to go home and comparison shop.  That’s because they  are truly a “targeted” market–constantly hunted down and severely disadvantaged when their pursuers are downwind, when good hearing has a lot of Utility.  The same goes for their own targeted prey–they’re going to eat better if they can hear. Zombies need binaural, directional, fully-automatic hearing aids both to survive and thrive, not to mention combating cognitive decline.

And not just any old hearing aid off the Internet either.  Deep canal fittings are a must, since their ears are going to fall off.  Extended-wear aids are highly advisable since zombies can’t be trained to repetitive tasks such as removing and inserting instruments in their ear canals; their fingertips have poor sensitivity and are going to fall off in Stage II; and visual limitations make it hard for zombies to tell left aids from right, or insert batteries.   The extended wear aids also have the advantage of being a short-term solution which works well with their one-year life expectancy.   Although the severity of hearing loss makes a case for cochlear implants, cost/benefit analysis does not favor this option, nor are there many surgeons anxious to do the procedure.  Likewise, Bluetooth accessories are not recommended.

The first thing to do is figure out where the zombies are.  You’ll find maps depicting projected standardized US mortality ratios are useful when planning store locations.

For Those Who Doubt the Un-Dead Market is Alive

Some doubt that zombies exist, but conspiracy theorists nod knowingly when the government issues a weak denial through the Centers for Disease Control:

Sure. They wouldn’t deny it unless zombies existed.  The following is an exhaustive circumstantial list compiled to prove with impeccable logic that zombies are here and here to stay.

3.  Respected legal journals discuss zombie estate planning.  You KNOW lawyers would not get involved unless the zombies were real and paid their bills.

4.  FedEx delivers antidotes for zombie attacks.  Ergo, zombies exist or there wouldn’t be an antidote.

6.  Besides Christopher Walken, there is at least one documented case of a Living Zombie — a strange case of Art imitating Life imitating Death.

7.  Cotard’s Syndrome, where living people believe they are dead.  No report on what they eat.

8.  British Columbia’s Zombie Preparedness Week.  BC people are tough realists.  They would not spend a week preparing if zombies were not real.

9.   “If you awake from a coma, and you don’t immediately see a member of the hospital staff, assume a zombie takeover has transpired during your incapacitation.”  I wake up this way every morning.  Ergo, zombies are among us.

11.  With the Presidential election looming, the US has its first Zombie presidential candidate, with his own twitter feed:

“With his finger on the pulse of the people, he is running on a platform that emphasizes…health care –“I am pro-Zombiecare. Don’t be caught dead without it.”

In Conclusion and in Search of Emerging Markets

The choice to serve zombies is an individual one. But in the aggregate, it’s in our profession’s and industry’s best interest to cater to zombies.  Now that zombies are entering politics and influencing political systems,  the time is RIPE to get on their good side –while they still have one– and make sure they legislate favorably to the hearing healthcare industry.

But Wait, There’s More!  Zombies may be past their prime in more ways than one.  Cannibals are the new Monster of the Moment.  As the quote below suggests, some of them probably have hearing loss and need hearing aids, in addition to coming up with the rent.  Tune in next year for an update.

“A cannibal’s just a smarter zombie. You need more cunning to get away with being a cannibal. But cannibals still have day-to-day problems. They still have to pay the rent.”