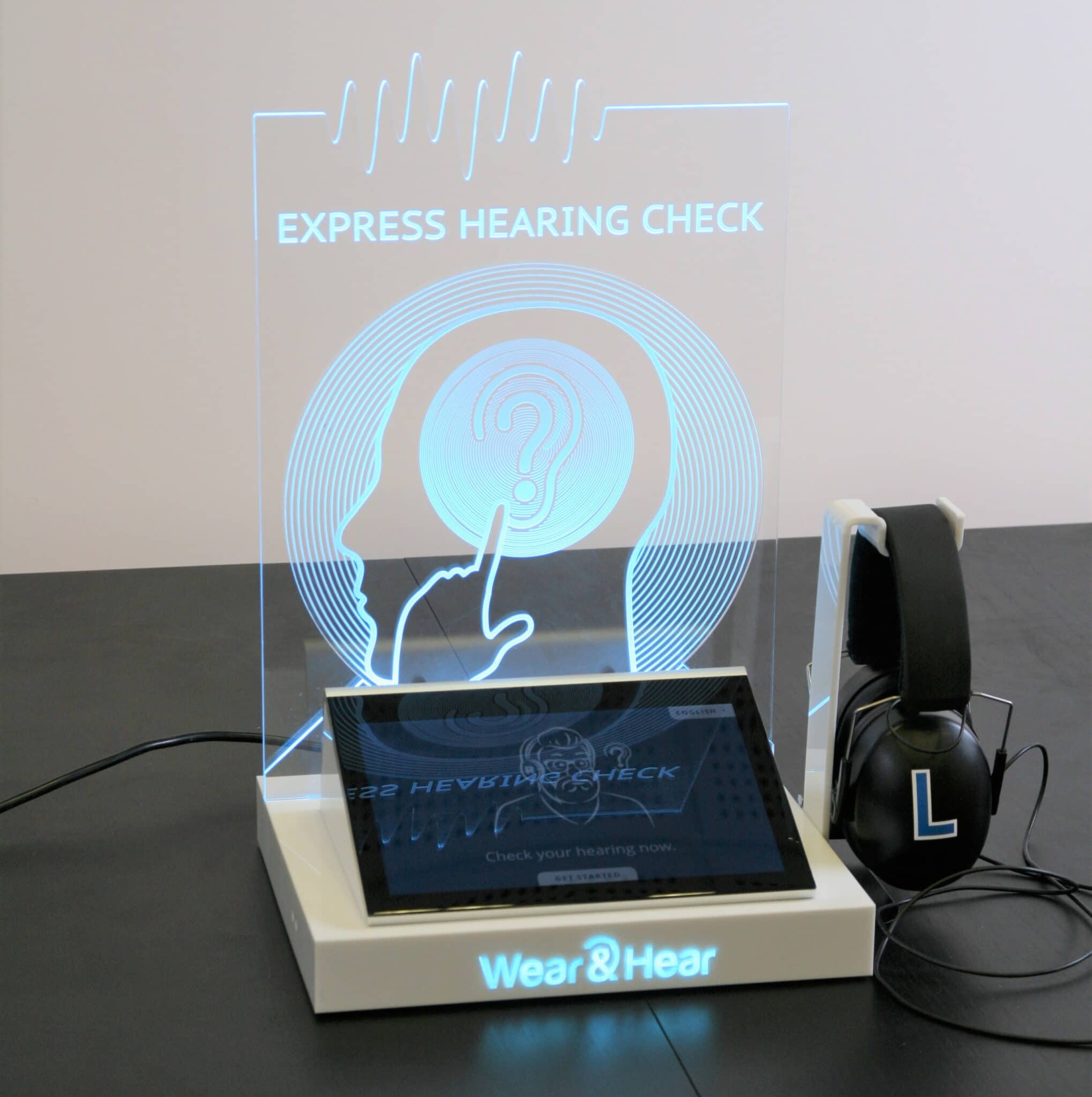 Part 2 of Dr. Amlani’s Self-Efficacy post concludes with an intriguing scenario for hearing aids.  “With a new driver at the helm of this multi-billion dollar industry, the landscape is sure to change from dusty and dirty to beaches and rolling hills.”  Read on!

From these positive findings, a series of subsequent, unpublished, economic models were run to estimate the potential of smartphone-based hearing applications in improving adoption rates of traditional hearing aid technology. The details of these models are displayed in Figure 1. (Note: the model excludes personal sound amplification products (PSAPs) given their stigma and close appearance to traditional hearing aids, which only increased adoption rates negligibly [< 1%].) 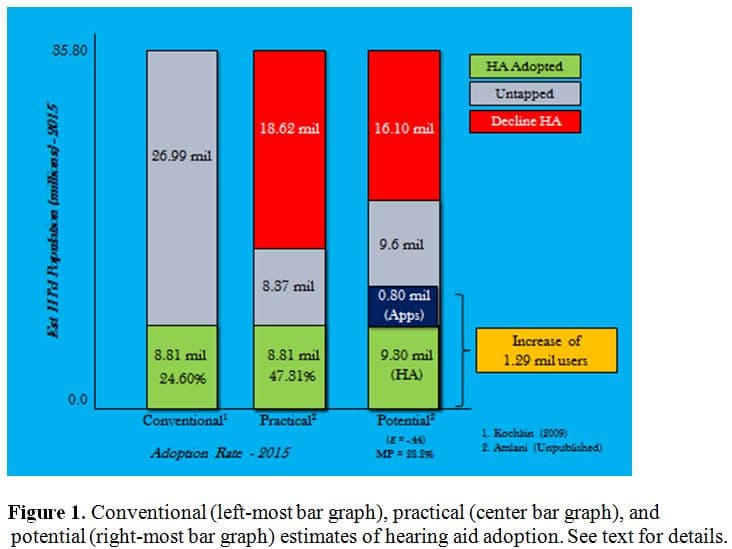 Thus, we ran a subsequent model, called the practical adoption rate, which is shown in the center bar graph of Figure 1. Here, the number of Americans who own hearing aids is unchanged, while the untapped market is reduced markedly to 8.37 million Americans who want or need amplification, but have yet to procure this technology. The remaining 18.62 million Americans, highlighted in red, either do not want or need hearing aids.

The right-most bar graph, in Figure 1, incorporates the availability of smartphone-based hearing aid applications and its influence on hearing aid adoption. This model, termed the potential adoption rate, suggests that smartphone-based technology acts a funnel, allowing listeners with hearing difficulties to experience first-hand the benefits of amplification with no delays in service delivery and little financial risk. As a listener’s self-efficacy to succeed and outcome increases with smartphone-based technology, there is an increased likelihood of transition from smartphone-technology to hearing aids, spawning a 3.6% increase in the overall adoption rate of hearing aids, from 24.6% to 28.2%.

As reported earlier, the literature suggests that the average American delays adopting hearing aid technology by five-to-seven years.{{3}}[[3]]Gagné JP, Southall H, Jennings MB. (2011). Stigma and self-stigma associated with acquired hearing loss in adults. Hear Rev,18(8): 16-22.[[3]] Specifically, this delay is the elapsed time from the date of diagnosis with hearing difficulty to the time that intervention is executed. Economic estimates indicate self-efficacy provided by smartphone-based technology could markedly reduce this period of non-intervention (Figure 2). 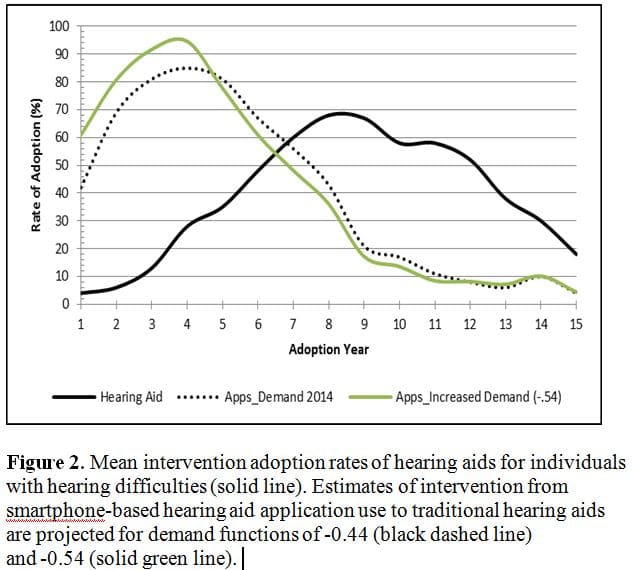 The solid black line in Figure 2 illustrates data collected in our laboratory (n = 851), suggesting that listeners with hearing difficulties wait, on average, between 6 and 12 years after being diagnosed with hearing loss to treat their hearing loss with hearing aids. Using a modified predictive model centered on the diffusion of innovation theory,{{4}}[[4]]Rogers EM. (1962). Diffusion of Innovations. New York: Free Press.[[4]] the availability of smartphone hearing aid applications, essentially, reduces the adoption of traditional amplification by six years.

This increase in intervention time is shown for two demand functions, -0.44 (dashed black line) and -0.54 (solid green line). It should be noted that these demand coefficients are consistent with present-day demand functions with the hearing aid market.

In February 2015,  Amlani{{7}}[[7]]Amlani AM. (2015). Improving patient compliance to hearing healthcare services and treatment through self-efficacy and smartphone applications. Hear Rev, 21(2): 16-20.[[7]] compared the benefits in two groups of older adults complying with provider recommendations from a hearing screening when information was presented face-to-face versus a self-administered smartphone-based hearing test application.  Results revealed that the odds for referral and hearing aid adoption doubled, in both instances, for participants who used a self-administered test application compared to the traditional hearing screening.  This was primarily because these individuals self-perceived the ability to shape their listening outcome, despite having the same perceptual difficulties as their non-self-perceiving counterparts.

If the hearing healthcare market wishes to reach its growth potential, operational changes to current practices are necessary. These changes will require regulatory bodies to reconsider carefully their stance on substitute hearing aid products, which include PSAPs and smartphone-based hearing aid applications.

At the same time, audiologists might benefit from affording patients opportunities to screen their hearing sensitivity using smartphone-based and online protocols that have been scientifically validated; then using these self-referrals to promote audiologic services rather than products.

Together, these changes will allow listeners with hearing difficulties to be the drivers of their hearing healthcare. With a new driver at the helm of this multi-billion dollar industry, the landscape is sure to change from dusty and dirty to beaches and rolling hills.

Amyn M. Amlani, Ph.D., is an Associate Professor on the faculty of the Department of Speech and Hearing Sciences, University of North Texas. Dr. Amlani holds the B.A. degree in Communication Disorders from the University of the Pacific, the M.S. degree in Audiology from Purdue University, and the Ph.D. degree in Audiology/Psychoacoustics (minor in Marketing and Supply Chain Management) from Michigan State University. His research interests include the influence of hearing aid technology on speech and music, and economic and marketing trends within the hearing aid industry.  E-mail: amlaniam@unt.edu