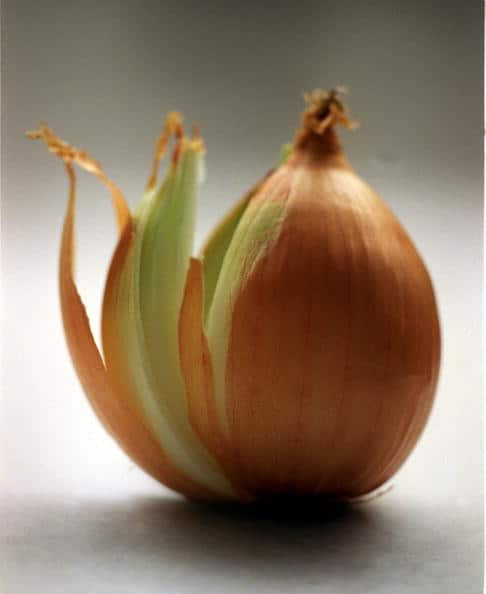 “Peeling the Onion” is a monthly column by Harvey Abrams, PhD.

It has NOT been a quiet week in Lake Woebegone. Legislation has been introduced in both the Senate and the House of Representatives to permit over-the-counter (OTC) hearing devices to be sold to the public without any requirement for professional involvement. Similar legislation was introduced at the end of the 114th Congress but the session concluded before any action could be taken on the bill.

Into the Congressional Woods

The 2017 version of the Over-the-Counter Hearing Aid Act differs from the 2016 version in several respects. Maggie Hassan (D-NH), and Johnny Isakson (R-GA) have been added as cosponsors in addition to its original sponsors, Senators Chuck Grassley (R-IA) and Elizabeth Warren (D-MA).

The current bill requires that the Food and Drug Administration (FDA) provide “reasonable assurances” of the safety and efficacy of OTC hearing aids to include the establishment of appropriate output limits. Another important revision is that the bill now requires the FDA to update and finalize its draft guidance on personal sound amplification products (PSAPs). The 2016 version of the bill called for it to be withdrawn.

In addition, the language in the 2017 bill strengthens the federal preemption provision (i.e., limiting State or local laws in conflict with federal law) that appeared in the 2016 bill by adding a prohibition against the establishment or continuation of “any State or local requirement for the supervision, prescription, or other order, involvement, or intervention of a licensed person for consumers to access over-the-counter hearing aids”.

The language in the house version of the bill, sponsored by Representatives Marsha Blackburn (R-TN) and Joe Kennedy III (D-MA), is very similar to that in the Senate version.

Is it Safe for Stakeholders to Walk Through the Woods Alone?

If we accept the possibility that some form of this legislation is likely to pass both Houses and be signed into law, the changes that have taken place in the few months between the introduction of the two versions of the bill are moves in a positive direction. The addition of language requiring the FDA to ensure that OTCs meet specific standards of safety and efficacy and to update, rather than withdraw, its guidance on PSAPs are small but meaningful victories for the professional organizations and industry associations who supported these changes.

There is still another battle to fight – and that is to limit the sale and distribution of OTCs to individuals with mild hearing loss, only. As currently conceived, these devices would be made available to those with “mild to moderate hearing loss”.  Notably, in none of the published reports or recommendations has anyone proposed a definition of “mild to moderate” hearing loss. The ends of this continuum represent vastly different degrees of hearing impairment and different approaches to treatment to ensure optimum benefit.

For example, if we use ASHA’s classification system, the OTCs would be appropriate for individuals with hearing losses ranging from 26 dB at one end to 55 dB at the other. The FDA  describes an even wider continuum of hearing losses with mild to moderate categories ranging from 20 dB to 70 dB. Neither ASHA nor FDA, however, define the specific frequencies that should be used to determine these cut-offs. 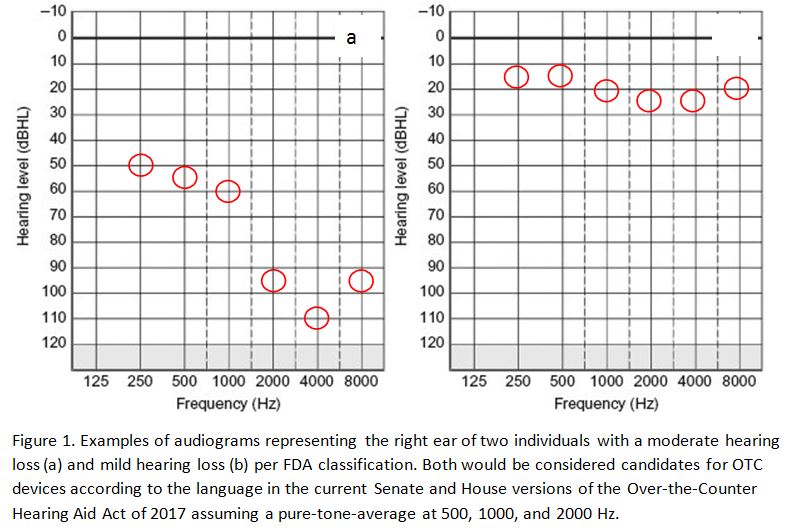 Assuming, for the sake of illustration, that 2000 Hz is included as part of a 3-frequency PTA at 500, 1000, and 2000 Hz, an individual can have hearing losses exceeding 90 dB at 2000 Hz and still be considered an appropriate OTC candidate according to the proposed legislation and the FDA classification criteria (Figure 1).

Satisfaction in an Outcome Measure Too

Another important OTC-related development that occurred in the past couple of weeks was the publication of a randomized controlled trial (Humes et al, 2017) that prospectively compared the effects of an audiology best practices (AB) hearing aid delivery model to an OTC approach.  The results suggested that there were no significant differences between the 2 approaches on 5 of 6 outcomes; the exception being the measure of satisfaction, on which the AB approach yielded a significantly higher mean satisfaction rate than the OTC approach. In addition, those assigned to the AB model were more likely to purchase their hearing aids following completion of the clinical trial than those in the OTC group.

It should be noted that participants in both groups (as well as those assigned to the placebo arm of the study) received baseline audiologic evaluations and the same high-end, commercially-available digital hearing aids.  In addition, 83% of the OTC participants who were undecided about keeping their hearing aids at the end of the initial phase of the trial decided to do so following completion of an additional 4-week follow-up trial during which they received the AB service-delivery model (i.e., probe microphone verification to target, adjustment of MPO and hearing aid orientation).

Satisfaction rates increased among the OTC group after the follow-up trial as well. One could reasonably assume, then, that the professional component of the hearing aid selection and fitting process matters (as does, perhaps, the quality of the device).

The FTC is Knocking at the Door

With these OTC-related activities as prologue, the Federal Trade Commission (FTC) will be holding a workshop  on April 18th “to examine competition, innovating, and consumer protection issues raised by hearing health and technology, especially hearing aids.” The specific topics to be discussed include:

The agency is also seeking comments from the public and interested parties through May 18th in response to the following questions:

Fasten your seatbelts; it’s going to be a bumpy ride.

Harvey Abrams, PhD, is a consulting research audiologist in the hearing aid industry. Dr. Abrams has served in various clinical, research, and administrative capacities in the industry, the Department of Veterans Affairs and the Department of Defense. Dr. Abrams received his master’s and doctoral degrees from the University of Florida. His research has focused on treatment efficacy and improved quality of life associated with audiologic intervention. He has authored and co-authored several recent papers and book chapters and frequently lectures on post-fitting audiologic rehabilitation, outcome measures, health-related quality of life, and evidence-based audiologic practice.  Dr. Abrams can be reached at harvey_abrams@starkey.com