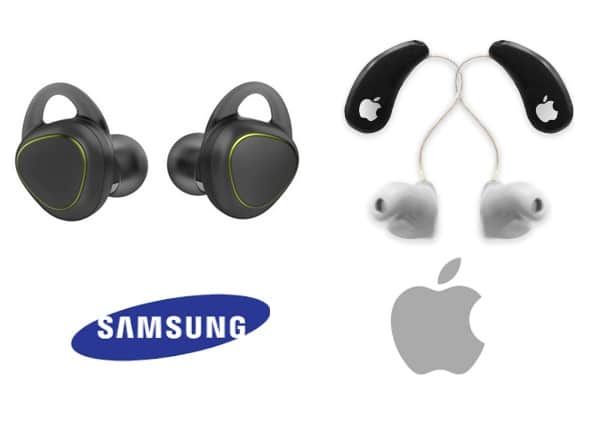 Last week the world caught its first glimpse of Samsung’s new IconX hearable device. The leaked images, but scant details, spread across the tech world like wildfire. It appears that Samsung is ready to go toe-to-toe with Apple if the tech giant decides to make the rumored, but radical, decision to ditch the headphone/audio jack on the next iPhone in lieu of wireless ‘Earpods’.

The iPhone 7 would then use the wireless Earpod devices to stream phone calls and other audio (like music) to the user’s ears via Bluetooth.

Samsung’s new device, the IconX, is rumored to be both a music player and a fitness tracker. Reportedly, the touch-controlled devices may have as much as 4GB of storage to endlessly stream your favorite music.

Some writers have compared the new IconX and its rumored features, to the Bragi Dash, which has created a lot of buzz inside and outside the hearing industry.

In the leaked documents, the IconX devices are shown in a carrying case that doubles as a charger. The devices are expected to be compatible with Samsung’s upgraded S Health App.

Further details on cost and projected release date have yet to be confirmed by the company.

There has been a lot of buzz in recent months in the tech world over rumors that Apple may do away with its headphone/audio jack on the new iPhone 7, which is expected to be released this fall. Rather than traditional headphones, Apple is rumored to be including new wireless earbuds, dubbed “Earpods”, for its next generation smartphone. The new Earpods would stream phone calls and other audio—all without the user being tethered to their phone by cords.

Oscar Raymundo, a staff writer at macworld, put together a short video discussing the possibility that Apple may truly adopt wireless headphones and what people may expect out of the new Earpods.

Click the image above to be taken to the macworld video

The new Earpods, insiders say, are rumored to include a microphone and have a rechargeable carrying case. According to Raymundo, the new Earpods are expected to have enhanced Siri integration via “Hey Siri” voice control commands.

While the details provided so far are mostly rumors and speculation, if either Samsung and/or Apple made on-ear wireless hearing devices the standard offering for newly purchased smartphones, the impact on the hearing industry could be profound.

Widespread adoption of such on-ear devices could certainly have potential to further alleviate hearing aid stigma, and due to their relatively low-cost, they may also place additional downward pressure on hearing aid pricing—which is likely to make consumers happy.

Whether this possible trend would translate into a large increase in sales of hearing aids, PSAPs or hearables, still remains unknown. One thing that is known: anything that helps reduce the stigma of wearing hearing aids is likely going to be very welcome news to hearing professionals and the patients and families they serve.