United Healthcare Revealed as Buyer of EPIC Hearing from Sonova

During an investor presentation at this year’s American Academy of Audiology (AAA) conference in Nashville, Sonova said that it had reached an agreement to sell it’s hearing benefits subsidiary company, Epic Hearing, to a “large US insurer”. However, the details of the agreement and name of the company acquiring EPIC were not revealed at that time, which left many speculating as to the possible buyer of the largest hearing benefits provider in the United States.

Now, as reported this week by the Star Tribune, UnitedHealth Group has been revealed as the buyer of EPIC Hearing. According to the report, UnitedHealth’s will be selling the insurance coverage directly through a “specialty benefits” division that includes vision, dental and “income protection” policies.

In recent years, the number of hearing benefit programs has been growing. These programs have become attractive acquisition targets for hearing aid manufacturers looking to streamline and grow their business, as was recently evidenced by Sivantos’ acquisition of TruHearing in April of this year.

Interestingly, Sonova’s move to divest EPIC would seem to run counter to the strategies of its competitors that appear to be investing heavily in it. However, Sonova believes the sale of EPIC would improve their position in managed care, and offered the following explanation to investors (below): 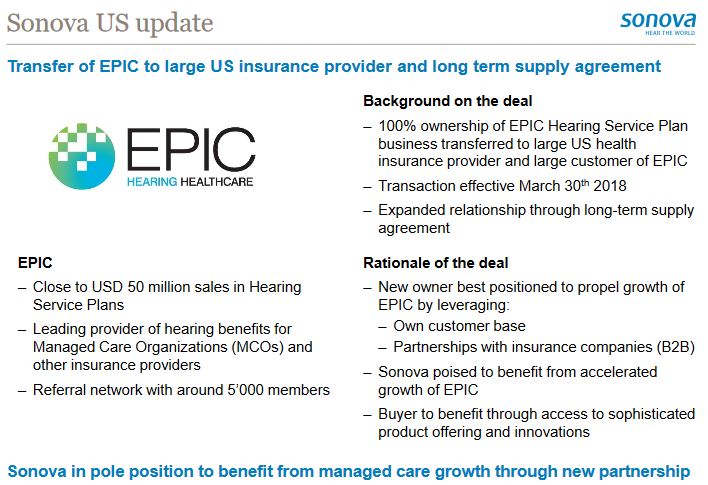 Announcement of EPIC sale at investor presentation at AAA conference in Nashville. The full report is available here.

“We think there’s a growing demand for hearing solutions in America. Earbud usage has caused some hearing loss in folks as young as 20s and in their 30s. [We’re] trying to bring the full suite of offerings to employers and consumers.”  –Tom Wiffler, Chief Executive for UHC Specialty Benefits

According to UHC’s Tom Wiffler, the company’s low-cost hi Health Innovations hearing aids will continue to be available to plan subscribers and “will continue running alongside the new business”.

The financial terms of the agreement between Sonova and UnitedHealth Group were not disclosed.