HomeUncategorizedHearing Loss and Vision Problems Go Together as…

Preliminary research from Smith-Kettlewell Eye Research Institute in San Francisco suggests certain vision problems in older adults is associated with a 50% higher risk of hearing loss.  Here is a summary of the research by Marilyn Schneck and colleagues:

Hearing loss was only measured by a hearing screening, not in-depth testing of the type done on the vision of the subjects.  Nevertheless, the results were consistent with what we know about the general population:  hearing loss increases with age (black bars in Figure 1), as did  increased vision impairment, the white bars in Figure 1. 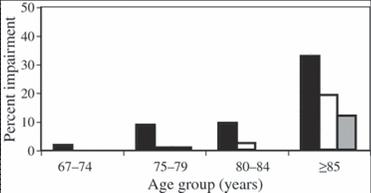 Of most interest is that subjects who had decreased visual performance were more likely to also have hearing difficulty and that effect was also age dependent (gray bars, Figure 1).

Let’s get back to that “low contrast” part of the study.  If you are like us, low contrast sensitivity doesn’t mean much, so we looked into it further and found this helpful illustration: 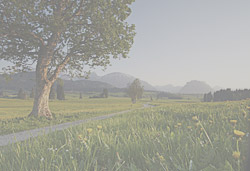 How it looks to someone with low contrast sensitivity

how it looks to someone with normal contrast sensitivity

People who have low visual contrast sensitivity see a scene with … not much contrast. It gets all hazy and it is literally hard to see the trees for the forest or whatever background surrounds the trees. Those with normal vision see everything distinctly and  in technicolor, as in the right picture.

When you think about it for a minute, this is an excellent analogy to what happens to people who lose some of their hearing with age. Those people don’t complain that they are deaf — they can still hear.  Instead, they complain that they can’t distinguish speech in noise — that it is all blending together, the clarity is gone, it’s getting hazy.  Though they don’t use the word “contrast,” that is what they are really saying — there is too little contrast between the noise and speech to allow them to easily “hear” in the haze.

This is exciting research although it just scratches the surface.  We are hopeful that the scientists at Smith Kettlewell will pursue this interesting line of research. We’re also hopeful that they will be joined by audiologists and psychoacousticians who will add important hearing measures to the research protocol.  Just as subjects in this study were tested for high and low contrast visual stimulus sets, it would be very useful to know how those same subjects performed on speech-in-noise tests.  If the performance deficits are similar between vision and hearing modalities, the next steps in the research might find similar physiological substrates to explain the findings.

None of this will happen overnight, of course, but we’ll keep checking in and let you know if anything comes up.

*This article was originally published at the Audiology condition on July 12, 2016. Images courtesy of nyc.gov and Contrast Sensitivity Testing