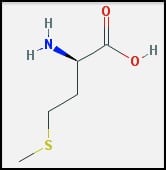 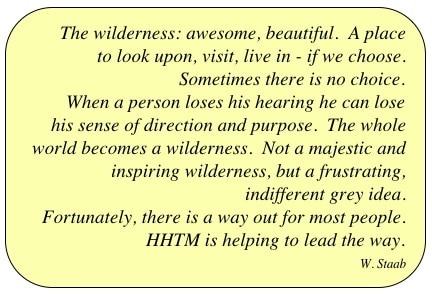 ADA: A Bad Day at Black Rock or A Good Day at Red Rock?

Many years ago Spencer Tracy starred in a film as Macreedy, a one-armed man who came by train to the sparsely populated and isolated desert town of Black Rock in the Southwest United States. It was the first time in four years that the train had stopped. Macreedy had come to present a medal posthumously to the father whose son had saved his life during the war while fighting in Italy. He encountered hostility with town folk covering up the father’s mysterious death. The movie featured a dry, dusty, and harsh desert environment.

This past week I attended the annual meeting of the Academy of Doctors of Audiology (ADA) in Las Vegas (another desert town, but certainly much larger and livelier than Black Rock). And, the venue changed from Black Rock to Red Rock, a casino and spa, making this a potentially Good Day at Red Rock.

As a professional meeting, the ADA offered all the usual and expected topics, providing information related to the management and expansion of a professional business. It is not possible to cover all topics from the meeting, so I have selected a few, summarizing salient comments from them because of the underlying message, and specifically because they relate to hearing.

The Role of Pharmaceutical Agents in Hearing Loss Management and Prevention

It is understandable that patients desire management of hearing loss by methods other than surgical intervention and/or amplification with hearing aids. Many take medication currently to reduce and even reverse other ailments, and ask why there is not something comparable for hearing loss.

There may be no such “magical pill” at this time, but Dr. Campbell’s presentation, focusing on her investigation of using pharmaceuticals as otoprotective agents for noise-induced and drug-induced hearing loss, demonstrated some promising results. She discussed various stages of development and proof of concept for various otoprotective agents, D-methionine (D-met), specifically.

D-Methionine (D-met) is a micronutrient found in common foods, including cheese and yogurt. It is a component of high-quality fermented protein in the diet, meaning that it is not foreign to the human digestive system.

Dr. Campbell reported that D-met research is currently taking a number of directions. D-met is among the  otoprotective agents in or approaching clinical trials to prevent cisplatin-induced ototoxicity. It has also been approved by the FDA and funded by the US Department of Defense (DoD) for Phase 3 clinical trials to prevent noise-induced hearing loss (NIHL) and tinnitus in US soldiers during weapons training. This is an area of considerable interest because of the high incidence of NIHL in the population in general.

NIHL is one area where D-met may have a more immediate and significant impact, especially if results from chinchillas can be eventually duplicated and confirmed in humans. Dr. Campbell reported animal studies conducted by her and others, showing that D-met:

While D-met is promising, Dr. Campbell stated that, to date, the FDA has approved no drug to prevent or treat hearing loss or tinnitus. She did caution, however, that anyone taking cisplatin, aminoglycocides, or D-met would be wise to avoid noise exposure.

Implications – Three consequences of advancing age that have received limited attention, but may suggest changes required to the current models of hearing impairment care, are dementia, cognition, and brain volume decline.

Projections among the elderly show a rising incidence of dementia, with the incidence being greater in low- and middle-income countries than in high-income countries (Figure 1){{1}}[[1]]Alzheimers Res Ther. 2012: 4(5): 40.  Published online Sept. 21, 2012[[1]]. The risk of incident all-cause dementia (compared to normal hearing), based on an adult population followed for 10+ years, showed that the risk increased in proportion to the degree of hearing loss. The greater the hearing loss, the greater the risk. 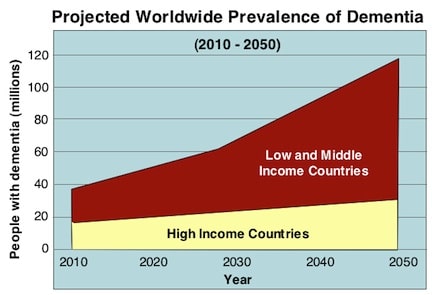 Cognition is the mental action or process of acquiring knowledge and understanding through thought, experience, and the senses. When measured in normal-hearing adults 60 to 69 years of age, a deficit of 7.0 decline results during this time frame, providing a representative equivalent of about a 25-dB hearing loss. Results were similar when measured using the NHANES (National Health and Nutritional Examination Surveys) or the BLSA (Baltimore Longitudinal Study of Aging) test. When these results from normal hearers are compared with hearing-impaired individuals, the hearing impaired exhibited a 32% faster rate of cognitive decline in DSS (Dementia Signs and Symptoms Scale) scores.

Brain volume decline – There appears to be some relationship between hearing loss and accelerated atrophy in the superior, middle, and inferior temporal gyri when measured by repeated MRIs (Voxel-based analyses) on 126 participants ages 56-86. The mean follow up duration for MRI measurements was 6.4 years. Density of gray matter volume was measured.

Hearing Aid Use – Dr. Lin provided published statistics indicating that, collectively, those who work with the hearing impaired have not done a very good job at generating interest in hearing loss, its consequences, and treatment via the use of hearing aids in the United States. Of an estimated 26.7 million hearing-impaired adults 50 years and older, 3.8 million use hearing aids – an overall use rate of 14.2% (2012). Interestingly, when compared with England and Wales (2009), where the National Health Service provides hearing aids to consumers at no cost, in a population of 8.1 million with hearing loss, 1.4 million use hearing aids – only a slight improvement in overall use rate to 17.3%. He suggested that this calls for an awareness of the impact and public health importance of understanding hearing loss treatment options, and perhaps changes within the distribution system. Additionally, he foresees a convergence of medical devices (in this case hearing aids) with consumer electronics, especially as it relates to wireless technology. 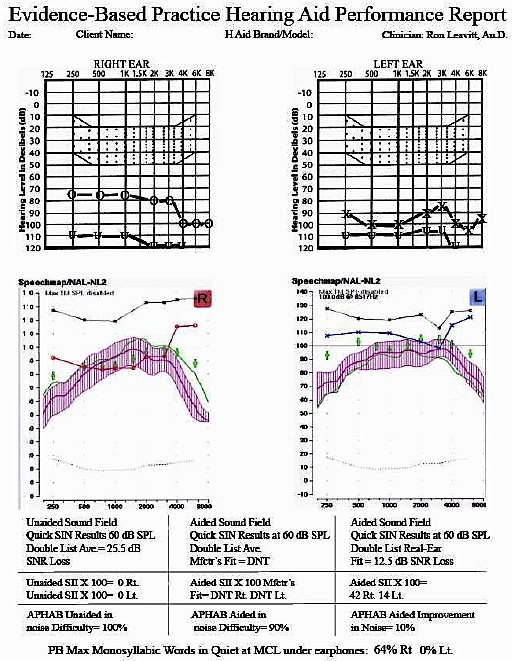 Based on a growing consensus among audiologists that use of real-ear aided measures, real-ear verified aided speech cue audibility (aka aided SII), speech testing in noise, and well-researched user-based surveys improve patient hearing aid outcomes, these authors developed a systematic approach taking these factors into account.

The result was a single-page form used to take these factors into account (Figure 2). Beyond being a time-efficient method for documenting these factors, the form goes further by serving as a screening test for auditory processing problems and provides a guide for aural rehabilitation recommendations, while also validating hearing aid performance. Additional information about the form, its intent and rationale, can be read at http://www.hearingreview.com/2013/11/a-time-efficient-method-and-form-for-documenting-hearing-aid-benefit/ – sthash.9gHjsQtI.dpuf.

The form was developed and is the result of an award-winning submission on “Best Hearing Aid Validation Procedure in the U.S. and Canada.”

Dr. Jastreboff’s research area relates to the role of subconscious systems in the brain and interaction of sensory with other brain systems. For this work, he used tinnitus, hyperacusis, and misophonia as specific phenomena for research. Although the literature is replete with the many “treatment” options that sufferers of tinnitus have been exposed to, to date, there is no single, best treatment. The most commonly used approaches to tinnitus and decreased sound tolerance use sound enrichment by utilizing environmental sound, and often sound provided by ear-level hearing instruments (sound generators, combination instruments).

For individuals who have these conditions in addition to hearing loss, the environmental sounds picked up by the hearing aid often create a “masking” effect, resulting in the tinnitus being less noticeable. A variety of affordable tinnitus combination units (hearing aid and masker) are available. Some are sufficiently sophisticated to require special programming to achieve the desired results. In his continued efforts to find better methods for tinnitus alleviation, Dr. Jastreboff continues his work aimed at creating new animal models of tinnitus-evoked reactions that could lead to better methods to alleviate tinnitus.

All in all, it was a rather good day at Red Rock.