Which is it? Take your pick?

This is a question that has been asked of me many times over the years. Is the component that converts the hearing aid amplified signal back to an acoustic signal properly called a receiver, speaker, loudspeaker, output transducer, driver, or even other names (Figure 1)? Or, can each of these terms be used interchangeably? Do they not all essentially perform similar functions, but differ only in name?

The term most frequently used when related to hearing aids is “receiver.” But how did this component become to be known primarily by the name “receiver?” From a human engineering point of view, the term seems to be misused, because it would seem that a receiver would be receiving sound rather than pushing sound. The receiver does not receive sound. It receives an electrical signal and converts it to an amplified acoustic signal, which is then sent/directed in one manner or another to an end user, where it is then received, or heard.

Following is what I recall from previous discussions with engineers on this topic, and from other sources.

Figure 2. A sampling of the many configurations of ear trumpets that were developed over the years. None have been identified as a “receiver.” Photo from hearingdirect.com.

1.  Early ear trumpets (Figure 2) are named because of their similar shape to a trumpet, where they “collected” sound energy, giving rise to the perception that a signal had been “received.” While this is a tempting explanation to present as an origin, this is most likely not the reason for using “receiver” for the product shown in Figure 1. No references to ear trumpets being identified either as a receiver, or with any of the other terms used in the title of this post have been found.

2.  Electronic hearing aid development began with the invention of the telephone by Alexander Graham Bell in 1876, based on a simple receiver, transmitter, and battery system made for his mother. Use of the term “receiver” most likely came from early telephony, which served as a model for the electric hearing aid. 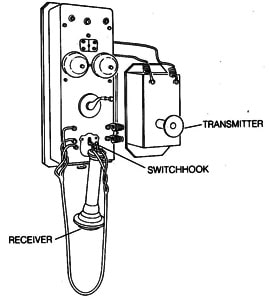 Early telephones had a separate “receiver” hanging on a switchhook (Figure 3). This is what a person would put to the ear and listen with. When the handset is removed from its cradle, the spring-loaded buttons come up and the switchhook closes. This completes the circuit to the exchange and current flows in the circuit. This is called the off-hook condition. (The on-hook, off-hook, and hang-up terms came from the early days of telephony, when the receiver was separate and hung on the switchhook when not in use. This also explains why many people still refer to the handset of today as the receiver{{2}}[[2]]Fike, J., and Friend, G. Understanding Telephone Electronics. 1983, Texas Instruments Learning Center[[2]]. The “electromagnetic receiver” was a central element of Bell’s original patent.

3.  Early electric hearing aids were carbon hearing aids (1889 and later), and identified the output transducer as an earphone, which it represented (Figure 4), not a receiver. Berger, writing on the history of hearing aids, wrote that many early hearing aids (especially carbon aids) referred to the component held to the ear as an earphone, or headphone{{3}}[[3]] Berger, K.W. The Hearing Aid: Its Operation and Development, (revised) 1974, National Hearing Aid Society [[3]]. He continued, saying that eventually, as the hearing aid earphone/headphone was miniaturized, it became known as a receiver to distinguish it from the larger earphone held by hand to the ear or coupled to the ear with a headband. For his book, Berger wrote that to distinguish between earphones and receivers (the latter, being smaller in size) he would use the term “receiver” when referring to devices one inch or less in diameter (Figure 5). The term “receiver,” used this way, came into play when the earphone became small enough to attach to an eartip or earmold (around 1914), where it more directly routed the amplified sound into the ear canal. Later hearing aids, including carbon hearing aids, began to utilize this smaller receiver (Figure 6).

Figure 5. Early hearing aid “receiver.” This configuration, with a shaped wire to hold it to the ear rather than a headband, had a nubbin to which some type of earmold could be affixed. Additionally, it was considerably reduced in size from earlier headphones, allowing for the elimination of the headband. (Photo from Berger, 1974). 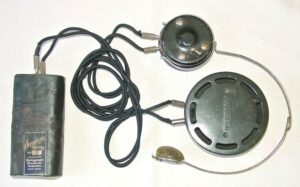 Figure 4. Acousticon Model A carbon hearing aid with separate headphone, held to the ear with a spring headband. Photo from: http://www.hearingaidmuseum.com

Up to this point, it appears that the hearing aid “receiver” has moved from being identified as an earphone (larger, and applied to the outside of the auricle), to a receiver – the terminology taken from telephony. Even today, it is common to hear the terms “receiver” and “earphone” used synonymously.

Without any attempt to quality the terminology, The Audio Cyclopedia states: “It might be said that the forerunner of the loudspeaker was the telephone receiver.” In the same resource, when identifying parts of a hearing aid, it describes the speaker in a hearing aid as an internal receiver, terminology taken from call-outs of a Zenith hearing aid photograph that differentiates an external receiver (body-style hearing aid) from the new behind-the-ear (BTE) style in which the receiver was included in the housing with all the other components{{4}}[[4]]Tremaine, H.M. Audio Cyclopedia (2nd Ed), 1969, Loudspeakers, enclosures, headphones, and hearing aids, pp 1079, 1158, Howard W. Sams & Co. Inc.[[4]]. 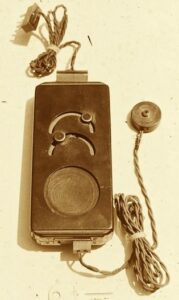 Transducer –Any device that converts energy from one form to another, whether that energy is force, temperature, acoustic, sonic, or other. This is essentially what the hearing aid receiver does; it converts electrical energy to acoustical energy. For this reason, it is also called an output transducer.

Individual transducers can also be called drivers, especially when used to complete a speaker system consisting of the transducer in an enclosure (box of wood or plastic, or even waterproof bellows assemblies). When designed accordingly, the end result is referred to as a speaker or loudspeaker{{5}}[[5]]Wikipedia, http://en.wikipedia.org/wiki/Loudspeaker [[5]]. To adequately reproduce a wide range of frequencies, loudspeakers/speakers generally use multiple drivers (subwoofers, woofers, tweeters, etc). However, a driver can also be described as an electrical circuit or electronic component used to control another circuit or other component.

The generally accepted term for hearing aid output transducers is “receiver.” A review of the Knowles Electronics website, a world leader in hearing aid transducers, lists this component under “receivers and speakers.”

With RIC (receiver in the canal) hearing aids, the term “speaker” has sometimes been used to differentiate it from the “internal receiver,” of traditional BTE hearing aids, even though they are the same device. The term “speaker” was an alternate term for the receiver by the inventors of the RIC fitting configuration{{6}}[[6]] Feeley, J. and Feeley, M. BTE/CIC auditory device and modular connector system therefore, US Patent No. 7016512 B1, March, 2006[[6]], even though products that followed use the term “receiver.”

Although Knowles lists hearing aid receivers under “Speakers and receivers,” Warren has pointed out that unfortunately, they use the word “Receiver” in two different contexts (and meanings) on the same web site that may lead to confusion{{7}}[[7]]Warren, Daniel, Knowles Electronics, Inc., Itasca, IL. 10/2014, personal communication[[7]].

In hearing aids, Knowles always uses the word “Receiver” for the balanced armature device that transmits sound.  Confusion arises from the fact that the cell phone industry is also serviced.  In cell phone parlance, the “receiver” is the moving coil loudspeaker that is held to the ear.  The “speaker” is a larger moving coil loudspeaker that is used with the phone in speakerphone mode.  If you have an iPhone 5, the “receiver” is behind the oval hole directly below the front-facing camera.  The “speaker(s)” are behind the multiple holes on either side of the lightning connector.

So, the nomenclature is becoming muddy, but “Speaker” appears to be the general term that covers all sound transmitting devices.  Warren provides the following distinctions:

“Speaker” or “Loudspeaker” means the subset of devices that radiate sound from some distance from the ear.

“Receiver” is often used to mean a sound transmitting device that is closely coupled to the ear, predominately in phone and hearing aid use, although this usage has not been picked up in audio earbuds.

Happenstance may be the primary reason the term “receiver” is used to identify this output transducer in hearing aids. The overall use of the term might best be summarized as follows:

“It is my understanding, and it is entirely anecdotal, that the basic technology behind the receiver has its origin in Bell Labs, where the telephone handset was developed. The part of the telephone you hold to your ear is called the “receiver,” and the name stuck for other types of magnetic devices. Remember, these things were being developed by electrical engineers, so they saw the device as the receiver of electrical energy. At least, this is the story I built up in my head over the years (Warren, 2014). An article by Sheldon Hochheiser published last year in an IEEE journal tells somewhat the same story.

So, what is the correct term to use for this output transducer in hearing aids? Take your pick?  For hearing aids, the term “Receiver” should be used.  It follows best the intended definition by function and technology.