Are You Ready for the Next Major Disruption? Rechargeable Hearing Aids 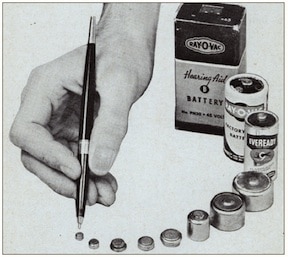 Good for the Planet,

But Hearing Aid Professionals Will Have to ReBoot (Again)

H. Christopher Schweitzer, owner of the Family Hearing Centers of Colorado, is also Director of HEAR 4-U International, and Chief Technical Audiologist for IMH Corp. 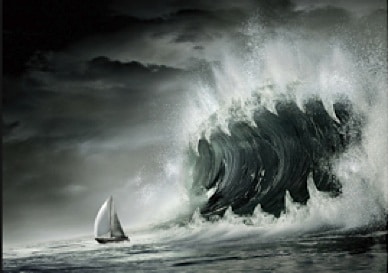 ‘We sailed through it, adjusted the riggings, adapted, and survived, sort of, that first wave of the ‘Digital Disruption.’

One can scarcely find an analog hearing aid in this second decade of the 21st Century. It’s also unlikely that there are still hearing care offices without computers to manage bookkeeping, customer contact, and, of course, programming digital hearing aids.  Office instrumentation from audiometers to probe-microphone systems has now morphed into ‘APP’ formats, on tablets and laptops. Solid wood audiometers with vacuum tubes stand as novelty office doorstops and historic curiosities. Practitioners have put down their jeweler’s screwdriver tools for the most part and learned to implement parameter changes on mouse pads.

Injection of impression earmold material is in the process of being replaced by laser light captures of bendy ear canals by computationally intensive 3-Dimensional modeling. According to a recent relevant publication{{1}}[[1]] Diamandis, P. & Kotler, S. 2015. Bold: How to Go Big, Create Wealth and Impact the World. Simon and Schuster Digital Sales, Inc.[[1]], 95% of hearing aids are produced with 3D printing technologies, a manufacturing form economically prohibitive and physically scarce just a few years ago.   The rush of change surges forward, and it is difficult to forecast anything except … change.

None of this is news to readers and hearing care professionals around the world. And, most are likely to own one of the 7.5 billion smart phones in circulation, probably with a high-definition camera system. Many will also have heard the story of how the great camera company, Kodak, was plundered by the digital disruption first launched in the Apple iPhone™. Their story was one of dozens wherein an entrenched, dominant business or an entire industry was demolished by the democratizing force of digitization.

Oh, and the companies that printed maps and phone books?  I’m pretty sure they, too, imagined a much longer life than the introduction of GPS, search engines and digital books permitted. Locally, the gentleman who sold his private practice to my wife and me in the 1980s immediately opened a record shop. Oops. That didn’t go so well. In just a few months it became a casualty of the digital transformation of audio entertainment.

So it may not be so bold or clever to suggest that another major disruption is nearing a tipping point, and its effect on hearing aid consumers and professionals will ripple (or roar) with similar dis-organizing and re-organizing consequence.

It’s Not Just about Ecology, but the Earth Will Be Grateful

The Age of eco-friendly ‘Battery Free’ hearing products may soon be huffing and puffing at your office door. To clarify, I mean the consumer will not be required to handle the power source that provides the necessary amplification for stress-reduced communication. Most of those billions of smart phones operate similarly, using a sealed in rechargeable battery that the consumer never touches.

Changing batteries has become a distasteful market disqualifier, enabled by the notable advance of new chemistry and creative engineering. The power source for small consumer electronics increasingly resides unseen and untouched by fumbling fingers. Of course, there is a rechargeable battery inside, but before you walk away with thoughts of “Oh, rechargeables, we’ve been there before!” consider a few more macro changes that are re-shaping the technical landscape.

As Elon Musk proceeds to build the world’s largest battery factory ever for his all-electric Tesla cars, and as communities around the country install more alternative energy sources, including charging stations for the new age of ‘gas free’ transportation, there are advances taking place that will relegate  the traditional hearing aid battery to the landfill (where some 1.5 billion end up at present).

Consider the hearing aid shown in Figure 1.  It is produced by IMHTM Corporation, a U.S. company that works with strategic partners to produce innovations in hearing products.

This is a small Over-the-Ear product, much like most familiar Thin-Tube or Receiver-in-the-Canal (RIC) designs. But it operates with a lithium polymer power element that reaches full charge in 90 minutes and operates at full capacity for 20 hours. It is charged with a familiar micro USB connection, similar to those used to charge mobile phones and tablet computers. The sealed-in power cell has a rather extraordinary 3.3 Volts, which are handled with a clever transfer control circuit to bring it into standard hearing aid operation ranges. But, the potential to perform more interesting operations with the extra power in a very acceptable sized hearing aid device is certainly latent with tempting speculation. As far as the user is concerned, it is ‘battery free’ with regard to handling and disposal.

While, yes, ‘rechargeable hearing aids’ have been around in various forms and constructions for nearly 50 years, a quick dismissal of what may soon be the most common form of hearing aid construction is risky.  Work is moving rapidly towards induction charging pads that will allow consumers to simply lay their devices on their night stand for use in the morning!

This paper is not intended to offer either a history of the technological evolution of battery cell chemistry and construction (Silver, Mercury, Cadmium, Zinc, Hydrides, Lithium, etc.), or a commentary on energy density. Rather, it seeks to bring to the reader’s attention that these changes have a high probability of affecting office economics and consumer behaviors. And it may happen faster than most are prepared to recognize, as, by their nature, exponential changes occur very slowly at first, followed by rapid and disruptive impacts.

In Figure 2, modified from Ismail, et al{{2}}[[2]]Ismail, S., Malone, M., & Van Geest, Y. (2014) Exponential Organizations: Why new organizations are ten times better, faster, and cheaper than yours (and what to do about it). Diversion Books, ExO Partners, LLC[[2]], one can locate the early slow pace and acceptance of previous rechargeable hearing aids on the flat early portion of the line where changes are actually slower than those with more traditional linear growth patterns.  But, after sufficient doubling time the curve rises dramatically. Hearing professionals may recall that the exponential properties of the audiogram are such that the 10-dB difference of sound power from 0 to 10 is just that, 10. But the increase from 50 to 60 dB on the audiogram is an increase of 900,000 (from 100,000 to 1,000,000)! Exponential changes are as non-intuitive as they are dramatic once the inflection point is reached. 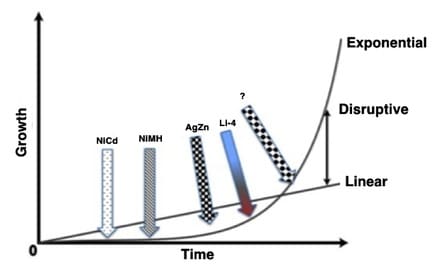 Figure 2. Exponential versus linear growth properties over time showing how earlier versions of rechargeable options, such as Nickel Cadmium, Nickel Metal Hydrides were on the early flat portion of the evolutionary tend line, and newer constructions, such as Silver Zinc, and Lithium Ion Polymers are moving upward on the curve. New polymer versions of Lithium Ion and perhaps other constructions are in continuous advance.

One compelling reason not to dismiss this paper’s ‘audacious’ predictions is that the relatively small hearing aid industry gets to ride on the shoulders of the huge consumer electronics market. There is a powerful and growing demand for ever smaller ‘wearable’ products. These require massive increases in sensors of all types – and methods to power them.

The illustration in Figure 2 from Diamandis and Kotler (attributed to Business Intelligence [BI]) shows the expected growth curve for Internet-connected devices and the featured position of ‘wearables’ on the upper portion of the forecast curve. These will demand ‘battery free’ construction for the most part, and hearing aids can expect to ride the curve, similar to how they were ‘digitized’ faster than many had forecasted, riding the wave of consumer product developments. 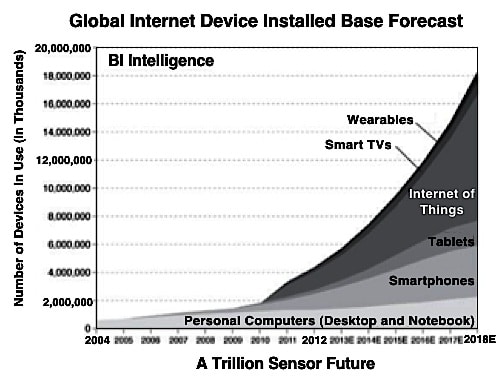 Figure 3. Illustration of the expected growth curve for Internet connected devices and the featured position of ‘wearables.”

Undeniably, forecasting is a risky endeavor, as any TV weatherman must admit. But, planning for a time when hearing aid dispensing and delivery are affected by the disappearance of battery transactions and the reduction of small metal buttons in trash cans seems prudent. Recent surveys in several practice offices indicate an overwhelming preference for power options that do not require replacing batteries. More details on that, and suggestions on how to steer the hearing aid office ship through the next wave of disruption will follow in a future post.