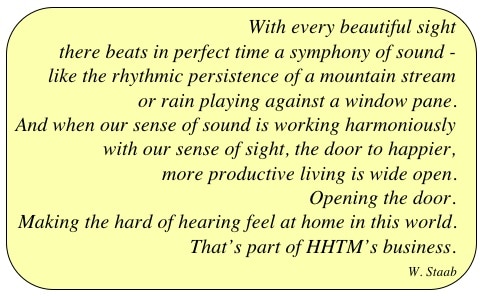 The last two posts have provided information about the reasons for the disappearing volume control on hearing aids, and on research studies that have investigated consumer desires for such a control. It appears that close to 35% of those who wear hearing aids wish they had some kind of user-adjustable hearing aid volume control.

Comments from hearing aid wearers in response to these previous posts on this topic, provide a compelling reason to consider volume controls on hearing aids. Four of these comments follow.

I have been wearing hearing aids for 56 years (since 6 years old). I prefer to have a manual hearing aid volume control….which I don’t have now.

I have been voicing my displeasure about lack of volume control ever since I have been using my present aids. I cannot control volume with telecoil on. It is always much too loud. Why aren’t professionals aware of this problem? Why have a telecoil if it is unusable?

I’ve worn two aids for about 15 years. I consider user VC essential, regardless of what else is built in. First, we all know that lots of hearing aids never leave the drawer. Are there any figures on usage of VC versus non-VC aids? Second, it’s not just the input levels that change, the user’s level of interest in the environment changes. When I’m in a bus or train, the background noise is very loud, and I have no need to talk to people, so I turn the volume way down. So thanks for questioning the trend to non-VC aids{{1}}[[1]]Howarth, B. Personal communication, and used with permission, HHTM Internet Site https://hearinghealthmatters.org/waynesworld/2015/hearing-aid-volume-control/, January 15, 2015[[1]].

One overlooked issue with the diminishing volume control, is the option of the user to couple their device with assistive technologies, in particular, hearing loops. FM and infrared both require receivers that can manipulate the volume; loops do not have that advantage. With the current interest in hearing loops, it is pertinent for those who fit and sell hearing instruments, to explain to clients the trade off they are making when they agree to purchase a hearing instrument sans VC. Hearing Loops are being installed all over the country. Sadly, many who use the very tiny new BTE hearing aids often have to choose between VC and telecoil. Then, while they are able to access the hearing loop via the telecoil, they are unable to adjust the volume to their liking. If the voice that is using the system’s microphone is a very loud voice, it’s a bad experience because it is way too loud. On the other hand, if the voice is very soft, it’s a non-experience. Often, more than one person is speaking to an audience. Controls are a must. I appeal to manufacturers and sellers of hearing instruments to consider these issues. They are far more important than anyone who does not experience hearing loss personally can possibly understand. Let’s get heads out of the sand on this one. Please! {{2}}[[2]]Davis, J. Personal communication, and used with permission,

Hearing aid designs in the past several years have taken away the user-adjustable volume control for many instruments. This was especially true for RIC (receiver in the canal) and RIA (receiver in the aid) hearing aids, which constituted the majority of hearing aids sold. Still, some of the more traditional power BTE (behind-the-ear) and lower cost non-RIC hearing aids continued to have user-operated volume controls, as did many of the custom-molded hearing aids. However, these units did not generally have all the advanced features and programming options that many users desired, or dispensers wanted to sell. The real concern was with those customers who wanted the “advanced” technology, but were essentially deprived of having volume levels that they could adjust manually.

A number of hearing aids have remote control operation to vary the volume level, either using a dedicated remote from the manufacturer, or as an app in utilization with a smart phone. These will be the topic of a future post. For now, the discussion will relate to user-adjustable control that is an integral part of the hearing aid itself. 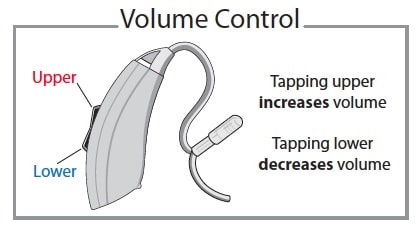 In 2007, a significant development was introduced in response to requests for a user-adjustable, or override volume control, and still provide for environmental listening options in a RIC/RIA style hearing aid. What made this development unique was that the user could override the programmed volume setting and change the hearing aid response – all with a single multiple-function user control{{3}}[[3]]US Patent 7,974,716, B2, Schumaier, D. Preprogrammed hearing assistance device with program selection based on patient usage, awarded July, 5, 2011[[3]]. The hearing aid employs a rocker switch design as illustrated in Figure 1. Because hearing aid manufacturers routinely mimic other successful competitive products, somewhat similar control options have now appeared, but primarily programmed as either a dedicated volume control or for dedicated environmental listening (quiet, noise, music, restaurant, automobile, etc.) using traditional manufacturer computer connected programming.

The following description/explanation of how the multiple-function switch operates is taken from ClikFit® patented technology. Walking through step-by-step instructions is the best way to explain how this process works. With this approach, it is the customer who makes the final decisions as to the settings in the hearing aid, based on their on-going listening activities.

The process described below eliminates the need to have the hearing aid connected to a computer to change acoustic algorithms. Instead, the customer accesses and chooses the settings by “Clik’ing” through sound-coded options using a rocker switch on the hearing aid. Originally designed for thin-tube open fittings, the technology can be applied to hearing aids with traditional earhooks and custom earmolds. 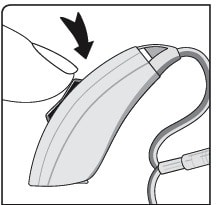 Figure 2. Each momentary press and release of the rocker switch increases or decreases the loudness of amplification. Pressing and holding down the rocker switch for longer specified times activates listening mode settings.

Depending on the developer, a number acoustic of modes can be made available. Rather than going through all possibilities, the following are three of the primary modes. To access other modes, if available, follow the same instructions.

In any of the settings, the volume level can be adjusted by tapping the rocker switch (up for louder, and down for softer).

From this point forward, the rocker switch provides the modes activated (in our example):

After wearing the aids for a while, it may be decided to try a different amplification setting than initially selected. This is accomplished in the following manner:

Some hearing aids now offer a user control with an option of being programmed for (1) environmental listening programs, or (2) volume control, as a new feature. The volume control has been the added option, allowing for a manual override of the hearing aid’s volume level. The physical control is generally a rocker switch, a sweep and touch, or a push button arrangement. While it might be said that no specific control is perfect, it is without question that a tactile object that can be felt by the user has been found to be much more acceptable than sweep control technology{{4}}[[4]]Woodworth L, Schroeder A, and MacRae M. User control. Innovations, Vol. 2, Issue 3, 2012, pp 8-9[[4]], something that has been known for years.

How Does Sweep Technology Differ From Rocker Switch/Button Action?

It eliminated the external physical button controls and mechanical involvement for activation. Doing this meant also that there was no oxidation of the control and no openings around the component for dirt or moisture to enter – all causes of mechanical volume control malfunction.

The control operates in the following manner: sweep the finger up and the volume increases; sweeping the finger down decreases the volume. Memory adjustments can be made with a touch to the surface of the hearing aid. This type of control is still available, but seems to have been replaced with a tactile switch of some kind, because customers, especially elderly ones, have tactile problems and could not manage these actions well. 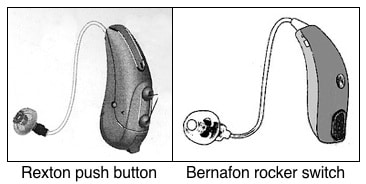 Figure 5. Common option manual volume control overrides include push buttons (left) and rocker switches (right). These generally allow the control to be used either as a volume control, or as an environmental listening option selection, but not both.

Other common controls for volume control override are push buttons, levers, and other configurations of rocker switches (Figure 5).

Modern, high-technology hearing aids are now starting to offer manual volume control overrides in response to customer requests/complaints about not being able to change the levels, both within a programmed setting, or when using the t-coil. A few now offer a multiple function control, which allows both volume control adjustment and environmental listening selection with a single control. This direction allows hearing aid users to self-adjust their hearing aids to their listening preferences.  This post related to user-operated volume controls that are an integral part of advanced technology hearing aids, and not a remote or smart phone application.

(Thank you to Dr. Dan Schumaier of Ear Technology Inc. for allowing the use of his multiple-function control technology as an example.)