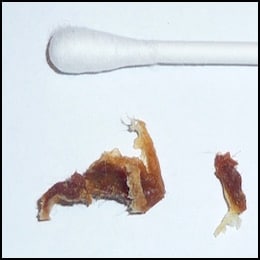 Glands of the Skin of the Ear Canal

Sebaceous glands secrete an oily substance called sebum (Latin, meaning fat or tallow). This consists of fat (lipids) and the debris of dead fat-producing cells. It is sebum that acts to protect and waterproof the hair and skin to keep them from becoming dry, brittle, and cracked.  The level of secretion increases during adolescence.

Sebaceous glands are usually found in hair-covered areas of the body where the ducts open into hair follicles, deposit sebum to the hairs, and bring it to the skin surface along the hair shaft (Figure 2).  In the human ear, this occurs in the outer portion of the ear canal where ear hairs are present.  In other locations of the body without hair, sebum is brought to the skin surface through pores in the skin.  In the glands, sebum is produced within specialized cells and is released when these cells burst.  Sebum is odorless, but when broken down by bacteria, can produce odors. 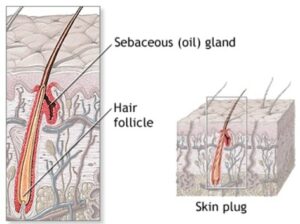 Figure 2. Illustration of a sebaceous (oil) gland as found in the ear canal, showing its location to a hair follicle where it deposits sebum to the hair, allowing it to be brought to the skin surface along the hair shaft to protect the hair and skin from becoming dry, brittle, and cracked. (From Body Guide)

The composition of sebum varies from species to species.  Human sebum consists of squalene, esters of glycerol, wax and cholesterol, as well as free cholesterol and fatty acids (Table I).  The fatty acids (lipid content) in humans, consists of about 25% wax monoesters, 41% triglycerides, 16% free fatty acids, and 12% squalene.  Squalene (an oily substance) is an intermediate preceding cholesterol in its biosynthesis, but for some unexplained reason is halted in its pathway to form cholesterol.  The high lipid content in sebum provides good lubrication.

Ceruminous glands require a little more explanation.  They are exocrine glands belonging to a category called sudoriferous, or sweat glands, of which there are two types:  (a) eccrine (merocrine) and (b) apocrine. 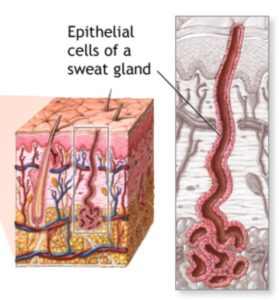 Eccrine Sweat Glands cover most of the body except the ear canal.  They produce a secretion of water and sodium chloride and their function is to produce perspiration and remove small amounts of waste.  The ducts of eccrine sweat glands terminate at pores on the surface of the epidermis where it lowers the body’s temperature through evaporative cooling.  Eccrine glands are coiled ducts deep in the skin that connect to the surface epithelium (Figure 3).  Eccrine glands respond to heat.

Apocrine Sweat Glands (Cerumen Glands) are modified sudoriferous glands.  In the ear canal, they are described as modified apocrine sweat glands and are found only in the outer ear canal lining.  They are larger, deeper, and produce thicker secretions than eccrine glands.  This thicker secretion is called cerumen that helps trap foreign particles from entering the ear and lubricates the eardrum.  The ducts of apocrine sweat glands extend into the follicles of hairs so that the sweat produced by these glands exits the body along the surface of the hair shaft.  The secretions contain pheromones, substances that enable olfactory (sense of smell) communication with other members of the species.  They produce a thick, oily liquid that is consumed by bacteria living on the skin.  It is the decomposing of secretions by bacteria that produces body odor. 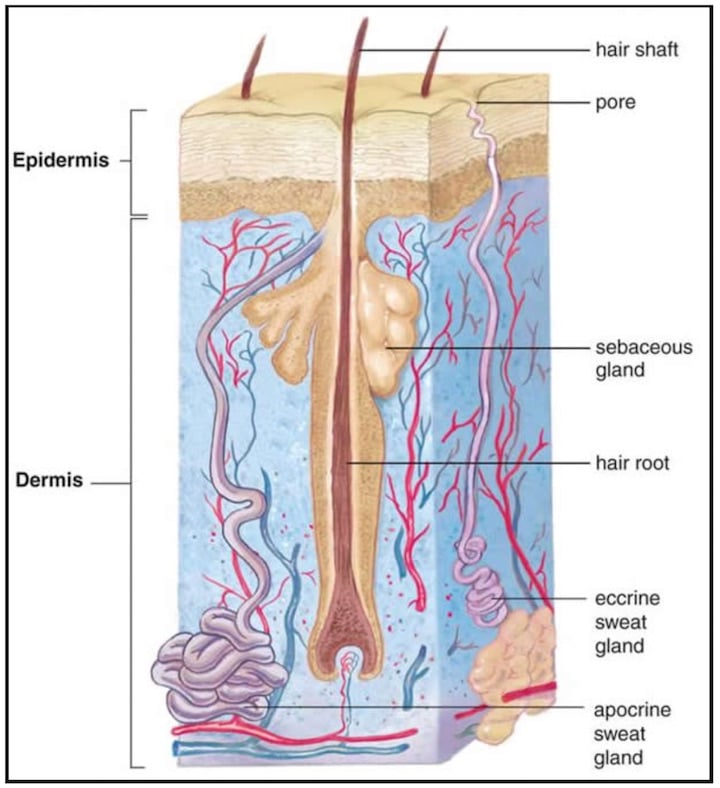 The difference between eccrine and apocrine sweat glands is shown in Figure 4.   The number of cerumen glands range in the thousands and are mostly along the entire circumference of the cartilaginous canal (Perry, 1957).  Perry comments also that cerumen glands may be fewer in number, possibly leading to dry cerumen found in some individuals.  The outer sac of the cerumen gland is composed of smooth muscles, which by their contraction, force the ejection of its contents.  Cerumen is made continuously, and slowly pushes older cerumen outward toward the exterior of the ear canal where it falls out of the ear or is manually removed.  Cerumen glands are believed to be stimulated by the sympathetic nervous system (SNS) during pain and stress.

As a result of the sebaceous glands’ secretions, cerumen’s organic composition comprises saturated and unsaturated long-chain fatty acids, alcohols, squalene (which accounts for between 12% and 20% of the wax) and cholesterol, 6–9% (Guest et. al, 2004).

Yes, and no.  Cerumen itself has a waxy composition.  However, what most people call earwax is generally more than just cerumen.   In fact, the contents of less viscous cerumen and viscous sebaceous glands combine on the surface of the outer ear canal, and are most often joined by shed skin cells (60% keratin), saturated and unsaturated long-chain fatty acids (12-20%) alcohols, squalene, cholesterol (6-9%), hair, dust, and dirt to form the substance commonly referred to as ear wax.

Is Cerumen an Antibacterial?

Cerumen also contains lysozyme, an antibacterial enzyme capable of destroying bacterial cell walls, according to some researchers.  Other researchers, however, are less convinced and claim that it is the perfect medium in which bacteria can grow.