My Hearing Loss: One Fork in the Road after Another 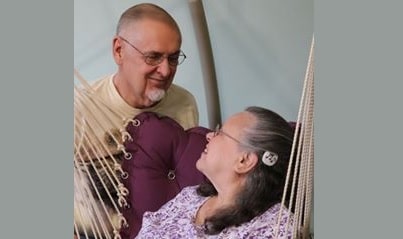 My life with hearing has been an interesting adventure with many twists and turns.

Hearing loss started at birth, 70 years ago, and progressed from mild to profound over 25 years. My speech developed normally, except for the “L” and “R” sounds, so my loss was not significant until around the age of four when children typically learn those sounds. When I started school, hearing loss was a barrier to conversations with friends, to instruction from teachers, and to unity within my family, as I was just one of three siblings with hearing loss. Like many people in the 1950s my parents did not understand the impact of hearing loss in children. While I failed hearing screening tests given at school, my parents observed a child who seemed to hear, but was extremely temperamental and did not follow directions very well. Hearing loss and its effect is invisible even to the child who has it. I had no idea that I was different from my peers – I just remember being isolated, unhappy, and frustrated.

But there was a benefit of my hearing loss: I liked to spend time alone and developed a musical talent for the violin, which I heard better than speech. I spent many hours practicing and became an excellent violinist. This musical ability belied the degree and impact of my increasing hearing loss. I was 17 before receiving my first hearing aids and speech training for the missing “L” and “R” sounds. The day I got my first hearing aid, a late winter snow created a mess on the road. For the first time in my life, I heard the sound of slush in the tires of the car.

Being in total denial of my decreasing hearing, I chose music for my college major. I did very well, but the year after graduation, I could no longer hear the sound of the full orchestra, let alone my violin. I was now an adult but was functioning at the emotional and social age of an early teen. Many changes were necessary for me to survive because my intelligence hid my inability to interact socially. With the help of mental health services, I spent the next 10 years working hard to grow up.

After my hearing loss ended my music career, I completed studies for a Master’s Degree in Librarianship. It was not a match; libraries were too quiet for me to hear the words of people requesting services and working in technical services put me asleep. Time for another change and I headed back to school to pursue Education. To pay for my studies I worked as a teacher aide in a center that served children with special needs. I fell in love with these children and this was a perfect match: they could not speak and I could not hear. After receiving my K-12 regular education and special education certifications, I began a 25-year career as a special education teacher; loving it and the children.

Thirteen years into my teaching career, my hearing loss again became an issue. A strong body hearing aid, set at maximum output, enabled me to use my remaining residual hearing, supported by my lipreading skills. Eventually even that hearing was gone and communication with my staff and students’ parents became inefficient. This was 1986 and I was not aware of any alternatives other than using sign language, which no one in my life used.

I was receiving occasional newsletters from centers where I volunteered as a research subject, and for the first time I heard about cochlear implants (CI). I had never met anyone who had been implanted (at this time there were only about 3000 recipients in the world) and research was difficult because the internet did not yet exist. In desperation, I went to the second convention of Self Help for Hard of Hearing People (now the Hearing Loss Association of America) in Palo Alto, where I met two people with cochlear implants.

Motivated by this experience, I began my CI journey in 1987.  At activation of my cochlear implant, I was greatly discouraged; what I heard sounded like a cage full of squawking parakeets. Soon my hearing through the CI became a daily miracle as I heard, learned and recognized new sounds in life around me.  Three months after activation, I was talking comfortably with staff and parents, both in person and on the telephone and I was beginning to enjoy music again! The intense depression that had consumed much of my life began to evaporate. Socially I gained confidence. I found love and married the most wonderful man who helps to make my life complete.

I remain hard of hearing, but auditory blissfully functional. Where some might see roadblocks, I always see forks in the road that offer choice and improvement.