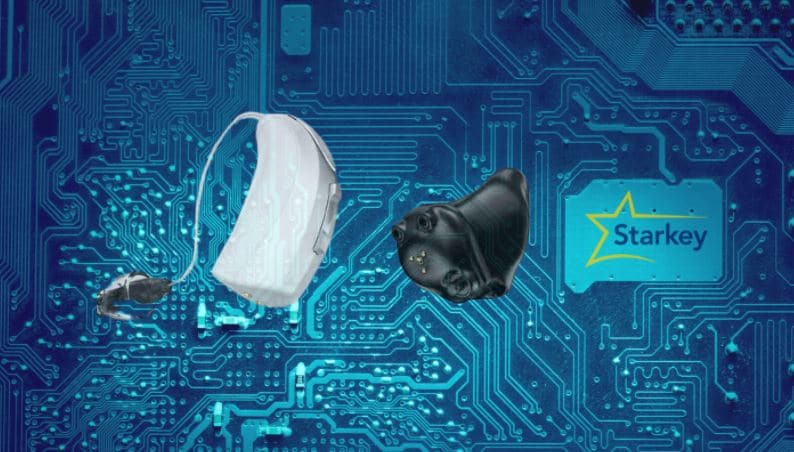 Earlier this month, Starkey announced that it was expanding its Livio Edge AI product line-up, as well as the release of additional features and upgrades.

HHTM recently had the opportunity to connect with Dr. Achin Bhowmik, Starkey’s Chief Technology Officer and Executive Vice President of Engineering, to discuss a few of the new feature upgrades and how artificial intelligence (AI) is being utilized to improve speech intelligibility.

With Starkey’s announcement, it added a new rechargeable BTE to its Livio Edge AI product line-up, following the introduction of the industry’s only rechargeable custom hearing aids earlier this year.

In a feat of engineering, Bhowmik says the new device packs 70 dB of gain — enough to fit a wide range of hearing losses, and yet at a size 22% smaller than the standard battery powered BTE device.

“One of my favorite quotes is, if it’s difficult, we work on it right away. If it’s impossible, it might take us a little longer,” said Bhowmik. “We want to push the limits of what was impossible yesterday and make it possible today.”

As part of the Livio Edge AI family, a simple ‘double tap’ on the device will activate the company’s Edge Mode, which provides an AI-based analysis of the acoustic environment and makes almost instantaneous adjustments to improve audibility. Starkey demonstrated that the new Edge Mode dynamically compensates for the speech attenuation caused by masks, making it easier for the wearer to understand conversations in challenging listening situations.

The on-board Edge AI engine conducts an analysis of the soundscape every 6 milliseconds, said Bhowmik. At this speed, quicker than the brain can recognize, the change takes place immediately to the user.

Starkey has also expanded the functionality of Thrive Assistant, the company’s app-based assistant that allows users to ask questions, troubleshoot hearing aid and accessory issues, simply say a command to change hearing aid volume, mute the hearing aids, change memories, set a reminder, or ask for any general information such as “what’s the weather” or “who was the 5th president of the United States”.

The user doesn’t have to memorize commands, said Bhowmik, but can simply ask their question in a way that is natural to them.

With the new Find My Phone feature, users can simply tell the Thrive Assistant “I lost my phone” or “find my phone” and it will help the user locate a misplaced smartphone by playing a ringtone from the phone, even if it is locked or on silent mode.

One of the most unique and interesting technologies announced earlier this month is Starkey’s new speech enhancement feature designed for those with hearing losses of 50 dB or greater: IntelliVoice.

The new feature takes advantage of a user’s smartphone and Deep Neural Network AI to offer a sophisticated method of enhancing speech sounds for the user.

The potentially game-changing technology is intended for those who struggle significantly with word discrimination, and has taken two years to develop says Bhowmik.

“Instead of pre-crafting algorithms, you let the machine learn from data and decide on its own the best course of action”

“It’s similar to how human brains work,” said Bhowmik. “You learn to recognize and match patterns, tell cats from dogs, differentiate “and” sound from “ant”, etc. You learn to take actions based on sensory perception. When you touch something hot, it hurts, so you learn not to touch it again. We’re now learning how to teach machines how to learn from the data. The breakthroughs are phenomenal. Deep Neural Networks are enabling autonomous vehicles, cars that drive by themselves! With IntelliVoice, we are now using this advanced machine learning technology to enhance speech.”

Due to the substantial processing and memory requirements to utilize a feature like IntelliVoice, it relies on the smartphone to enhance speech. The drawback, however, means that there is a slight delay in the sound reaching the user as it’s processed by the smartphone.

Due to continued improvement in chip technology, Bhowmik says the hearing aids will be able to do this themselves in the not too distant future. Additionally, the feature can be activated and deactivated by the user on an as-needed basis through the Thrive App.

“We are just getting started, said Bhowmik. “We are on an exciting journey to enhance and augment human perception with advances in artificial intelligence.”