The Dubious History of the Rotational Chair 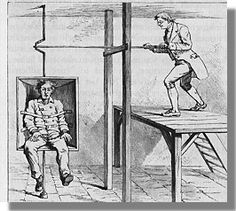 I have mixed feelings about the following post. For the practitioner, I think it is helpful to understand the history behind some of the techniques we use today. For the patient, I hope they realize that modern rotational chair testing is very well controlled, rarely producing any nausea or distress.

One of the first reports of using a rotational chair to treat patients involves Benjamin Rush. He was a physician in the late 1700’s and early 1800’s, and is best known as a signer of the Declaration of Independence.

He used the rotational chair as a treatment for the mentally ill with the premise that rotation would increase circulation to the brain. Figure 1 shows two versions of the chair. One looks, in concept only, similar to a modern rotational chair where the patient is sitting. The other, where the patient is supine, thankfully does not exist in modern medicine. According to Dr Joseph Mason Cox (1811):

“I now find that the perpendicular position is best calculated for violent cases, and the horizontal for opposite ones, and that in both the motion should be communicated in the most gradual way, and be progressively increased to the degree of velocity required”

Of note is the fact that the rotational chair of the early 1800’s was not used to diagnose inner ear disorders. It seems that there were two primary uses. As noted above, some physicians felt that spinning a patient around would promote circulation to the brain. Again, according to Dr. Mason Cox:

“The singular and unusual motion of swinging, when continued with increased velocity, induces first paleness, then nausea, and then alternately an obvious change in the circulation, and giddiness: these changes necessarily result from an impression made on those organs of sensibility, the brain and nervous system, and prove that the remedy acts on the seat of the disease; though the proximate cause cannot be satisfactorily ascertained”

The second use was clearly designed as a behavior modifying punishment, where the patient would be rotated to point of vomiting, and threatened with repeated rotations if they did not change their behaviors. Dr. Mason Cox once again, ”

After having committed some irrational and spiteful act, the patient is forthwith placed on the rotating chair and revolved at adjusted speed until he becomes quiet, apologizes, and promises improvement, or until he starts to vomit.”

Modern Rotational Chair testing is a sensitive measure of inner ear function, and a critical part of an evaluation for dizziness, vertigo and/or balance disorders. The current protocols involve very slow movements for typically only seconds at a time, with breaks in between for as long as the patient likes. Nausea is a very rare consequence, typically only occurring in people that have a history of very  bothersome motion intolerance. Personally, I can’t sit in the back seat of a car without getting a little queasy, and I have undergone rotational chair testing several times (mostly just the calibrate the equipment) and have experienced no nausea at all.