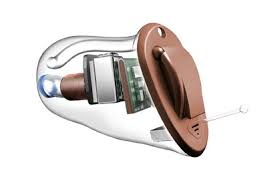 CIC with very short sound pathway between the receiver and the end of the bore. Courtesy of www.bestsoundtechnology.com

But let’s take a step back and examine what exactly we are dealing with. The acoustic pathway is typically a narrow (1 mm or less) tube that is quite short (10 mm or less) and there are no sudden turns.  In acoustics this is called a “compact region”, although to be fair, when I learned this, the professor just said for “low frequency sounds where the dimensions are quite small relative to the wavelengths we are dealing with”.  A compact region also implies that the air is not compressible and that applies in acoustics for all sounds below about 2500 Hz, so I think that we are pretty safe, as long as we restrict our discussion to frequencies below this point.

Compact regions (or whatever we choose to call them) exist whenever the dimensions are small fractions of the wavelengths that we are dealing with. Ear canals are also considered “compact regions” and the normal rules of acoustics that may be found in a room do not apply in the same way to these small tubes. This is especially true when we consider the directional pattern of in-ear monitors and find that they don’t follow the same pattern as loudspeakers would in a room.

Consider 1000 Hz- this has a wavelength of 340 mm (about 1 foot). And 500 Hz and 250 Hz are even longer. Actually, for most of the frequency range that we are interested in for both speech and music, the wavelengths are much larger than the very small dimensions of the hearing aid or in-ear monitor receiver tubing.

Compact regions have some important features.  One is that the waves that are created in such a region are “ordinary” plane waves that propagate down the tube at a constant velocity. And since the tubes are so short, the first reflection occurs for sounds in excess of 8000 Hz (F=v/4L). Effectively these tubes have no wavelength-associated resonances and are sometimes called constant volume velocity generators.  Any resonances in these hearing aids or in-ear monitors are related to the receiver(s) and not the tubing. 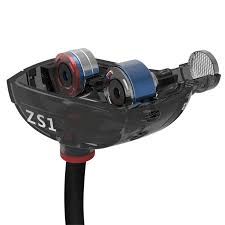 Two driver in-ear monitor that only “sees” a smaller diameter of the acoustic pathway. Courtesy of www.aliexpress.com

Technically there is a small region (“of spreading inertance”) directly in front of the sound nozzle where the waves are radial in nature, but by about 5-8 mm beyond the end of the sound outlet are plane waves. This is the main reason why with probe microphone systems, the medial end of the tube needs to be at least 5-8 mm beyong the end of the sound bore.  You also have to love acousticians:  the names that they give to physical phenomena are great. Where else can you say the phrase “spreading inertance” and get away with it?!

Another feature is that the air in the tubing acts as a single element that has an acoustic mass, called an “inertance”.  This mass is seen in many such tubes such as a vent in a hearing aid.  For example, an open vent provides a pathway for the lower frequency sounds to escape from the hearing aid fitting but the air trapped in the vent oscillates as a single unit and creates a “mass associated resonance”.  This “vent resonance” is well-known as an occasional nuisance in hearing aid fittings with tight fitting earmolds.

When there is a single hearing aid receiver, found commonly in custom and RIC hearing aids (or equivalently, a single driver in an in-ear monitor), the situation is quite straight forward.  Sound is propagated to the listener with only a slight amount of inertance.  However as the sound bore becomes narrower (such as with a partial occlusion of wax), the inertance increases.   Although I may be wrong (and this has happened to me once or twice before) it is my view that this is why hearing aid users complain both of an echoey or a boomy sensation (an increase in low frequency inertance) as well as a lack of clarity (decrease in high frequency sound transmission due to an overall increase in impedance).

Other than partial wax occlusion another area that effectively reduces the cross sectional area of this already-narrow-tube is the use of more than one hearing aid receiver or driver.  For multi-receiver/multi driver systems, each addition reduces what is “acoustically seen” by a factor that is inversely related to the number of drivers or receivers.

More is not necessarily better especially when it comes to small confined spaces (or compact regions) where the dimensions are a small fraction of the wavelengths that we are dealing with.  There is no inherent reason why a multi-driver in-ear monitor should sound better than a single driver one, and based on my listening experience, I don’t feel that a multi-driver receiver earphone has better sound quality than a single driver one.