Regulation of Hearing Aids in the US, part 3 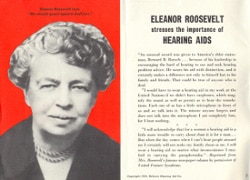 The industry’s expanding sales and capital were the result of technological innovation as well as intense marketing campaigns by the manufacturers.   Celebrity marketing and fake testimonials were a big part of these campaigns.  Luminaries ranging from Bob Hope to Bernard Baruch were used to endorse the products.

Beltone scored a huge marketing coup when it featured Eleanor Roosevelt in a widely-disseminated pamphlet (Fig. 1). The claims were broad, apocryphal, and ungrounded in data. Some were hilarious.  Beltone claimed wearers could “say good-bye to the handicaps of hearing loss,” and experience “the difference between happiness and loneliness.” Other manufacturers anticipated the Timex Watch campaigns by claiming their instruments worked after being dropped 600 ft out of airplanes.  Almost everybody claimed their aids were invisible.

The hearing aid industry fell under the jurisdiction of the Federal Trade Commission in 1934 and fell afoul of that agency 66 times from 1934 to 1976.  The FTC filed orders against manufacturers for false or misleading advertising many times in the 1950s.  The FDA gained jurisdiction of much of the industry in 1977 (see below), but the FTC continued to police the industry in certain areas.

In a different arena, the FTC issued a decision ordering Beltone to “cease and desist” its exclusive concession arrangement with independent hearing aid dealers because the practice limited commerce and thus was a violation of section 8 of the Clayton Act.2 That decision was appealed repeatedly over the years, finally culminating in a 1982 Supreme Court ruling in favor of Beltone, stating that its sales practices did not constitute restriction of trade.

The evolution of the hearing aid industry sketched out so far in this series is that of a consumer product.  From hand to horn to telephone-like device, the hearing aid was developed and thought of by manufacturers and consumers alike as an appliance that boosted sound.  In that regard, hearing aids were a closer fit to the personal stereo niche than to a medical device category.

Technological advances focused on shaping and boosting the amplified sound in order to offer an improved product to more targeted markets – specifically, people with hearing loss.  Product differentiation was a response to the market, which in turn became more clearly targeted as those with disability as the product evolved to meet their specific needs.  Hearing aids became more expensive as they improved technologically and competed on claims of correcting disabilities.  The stage was set for scrutiny, and possible regulation, of claims and pricing by the industry.

Part 4 of this series will look at the entry of the FDA into the hearing aid foray.  Stay tuned!

1Unless otherwise referenced, all information in this section taken from  Marketing of Hearing Devices.  Washington University School of Medicine.