Audiology Landscaping Under Way by the Affordable Care Act

George Lyons (ASHA VP for Audiology) recently anticipated a “changing landscape” for Audiologists as components of  the Patient Protection and Affordable Care Act (ACA) are implemented.  His well written post was well received and frequently read.  It was also rare —  few articles in the public domain are written specifically about Audiology and the ACA;  fewer still are written by elected officers of membership organizations that include Audiologists.

Dr Lyons’s post was short on details and long on expectations, which sums up the current situation nicely.  Universal enrollment in ACA started on October 1, but I’ll bet few Audiologists and even fewer consumers have a grasp of what roles, if any, Audiology plays in the plans on offer.  I’ve been following ACA since its enactment back in 2010 and I can state with assurance that I do not grasp  how our profession fits into the new landscape.

Dr Lyons is surely right that we’re facing a landscape change, but it may be more on the scale of dynamited building implosions in Vegas.  Vegas is bigger and fancier than ever and maybe Audiology will be too, but we can expect structural casualties as Essential Health Benefits, Rehabilitative, Habilitative and ACOs are defined and refined. Stay tuned.

Today’s post is a first stab at compiling an Audiology – ACA table.  The information is not new or privileged. It is out there for those who want to dig or for some who belong to professional membership organizations.  But it is hard to find it aggregated in one spot and that is available to consumers as well as dues-paying professionals.  And it is not static.  Dollars, professionals and enrollees are up for grabs, state by state, so expect definitions, benefits and coverage to fluctuate as turf is surveyed and staked.  HLAA states it thus from a consumer view:

It will take forethought, good planning, and some roll-up-your-sleeves advocacy for those willing to increase hearing aid coverage under the ACA.

Table 1 is information aggregated from internal membership organization documents and publicly available HLAA documents, which tell us that 22 states have “some coverage for hearing aids and related services.”  This may not be a big change in landscaping:  most of these states (18) already had that coverage in place under state statute (denoted by asterisks in Table 1).  Over half of the states (in red in the Table) are using the federal exchange; the others have set up their own exchanges.  At least for now, Audiologists in some states will see more landscaping changes than will those in other states.

Caveat:  The table is rudimentary, designed to get the ball rolling and attract those with more knowledge to chime in for the benefit of all our readers. It contains discrepancies and confusions (e.g., age in Colorado; payment by ear or year in Texas).  Thanks in advance for all comments, corrections, directions, and additions. 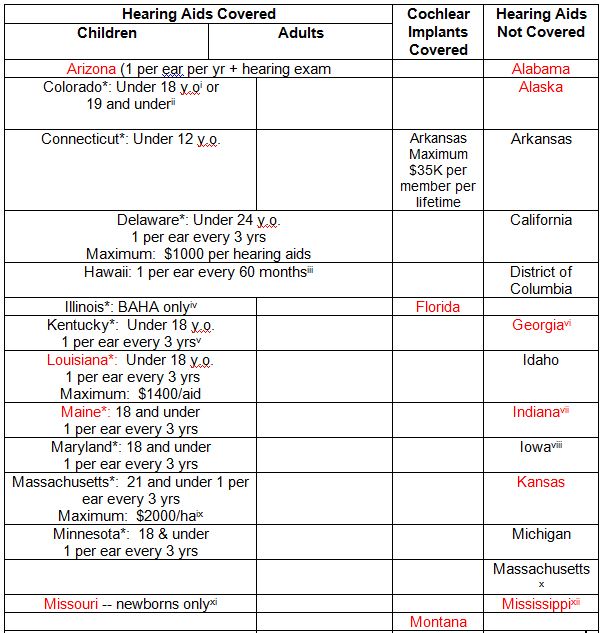 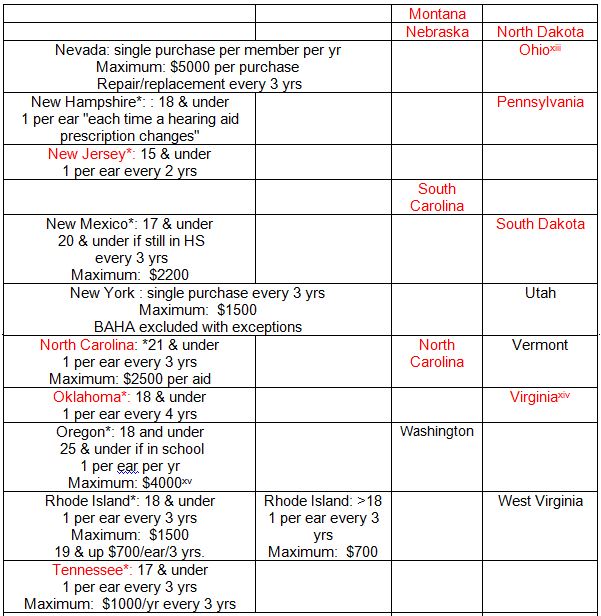 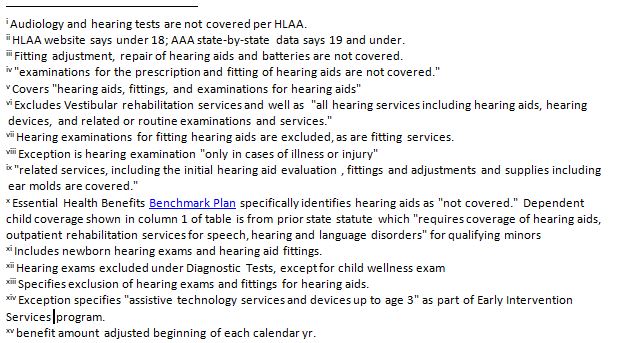