Hearing Economics has clawed its way to the 100-post peak today, a dubious achievement signifying either celebration or an urgent need to jump off and get a life.  A third option is to figure out the meaning of life by writing yet another post.  The following are weird, funny, disconcerting, or just plain embarrassing items that have been tucked away these 100 weeks for future consideration.  What better day to consider them than my 100th?

Disconcerting Item: Thomas Edison was Not an Economist 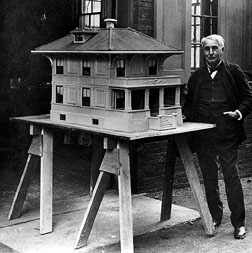 Edison’s “bomb-proof” house — “In the style of Francois I”

…and he was no Martha Stewart either.  A little known fact is that Mr Edison was the proud owner and founder of the Edison Portland Cement Company.  Edison was a Supplier in search of Demand, a guy who totally didn’t get the Economic concept of Utility.

In a prolonged fit of lunacy, Edison decided to create Demand by inventing a new concrete product — single-piece, cast-concrete houses for the poor masses.  Talk about substandard housing.  He “built” several hundred but couldn’t unload them at the rock bottom price of $1200.  There were issues:  repairs were impossible; so were remodels. Nailing a picture to the wall was almost impossible. And they were ugly.

Unthwarted, Edison forged on into furnishing and fixtures to keep his factory in business.  Manufactured products ran the gamut from $5 concrete bedroom sets to sofas (featuring “foam concrete”) to…. concrete pianos, price available upon inquiry.  There were issues:  the furniture was uncomfortable, foam concrete notwithstanding; the pianos were unmovable, albeit indestructible. The company went into bankruptcy several times but somehow managed to outlive its founder, perhaps sending a message that life has some concrete meaning.

Some might ask “What was Edison thinking when he built a concrete piano?”  Recall that he was severely hearing impaired and perhaps that influenced his choice of instruments and their construction.  Or maybe he just needed to make some money and didn’t care how the pianos sounded.

Stealing Robert Traynor’s usual thunder when it comes to writing about famous people with hearing loss, allow me to share this final Edison tidbit, in which he claimed his deafness resulted from:

Another little known fact is that I masquerade as a full time student in the Economics Department at the University of Arizona.  Even lesser known, and more surprising, is that I make good grades because I really like learning this stuff.  This unexpected turn of events contrasts sharply with my first undergraduate degree decades ago, where my memories tend toward keggers on the Rio Grande. I am  hazy on attending class but absolutely certain I was never a Legislative Intern.

I bring up Legislative Intern  because, in my present reincarnation as the Oldest Student on a Bicycle on Campus, a strange event keeps recurring.     Twice a year I get a letter from the Office of the Dean, which goes like this:

…you have been identified as a potential applicant for the Arizona State Legislative Internship Program.  Students are sought from diverse backgrounds, and minority students are encouraged to apply.  The work is demanding and fascinating …

I definitely qualify as a minority and I like the idea of doing fascinating things.  But I can’t bring myself to participate in the destruction of State Government as we know it–a likely outcome if legislators were saddled with interns who could be their moms.  Academics and Audiology aside, it seems that my Legislative Internship cred is seriously lacking, based on my co-workers and friends falling to the floor in laughing fits every time a letter of invitation arrives.  This says something about the absurdity of life.

It also speaks to the foolishness of ignoring Economist Adam Smith’s thoughts on Economic Growth through Division of Labor and Specialization.  You just can’t be good at everything, much less make a living by fitting hearing aids in the morning and running around with legislators in the afternoon.  Consider the offer:  $4200 and 12 hours credit for the semester, plus a $500 relocation fee because you have to move to Phoenix.  That’s not even enough to buy one of Edison’s concrete houses.

Embarrassing Event:  Watch Out for Doctors of Audiology in the Phoenix Airport Reading Magazines

Not a Doctor of Audiology, but maybe a Legislative Intern

Bon vivants know that Vanity Fair has long been the periodical of choice for the entertainment industry, or so I assume.  I really don’t know much about the magazine or the entertainment industry because I am … after all … just an Audiologist.  Were I to bicycle across campus and enroll in the Audiology AuD program,  I might correct those deficiencies and become an expert on living, documenting, or at least critiquing the bon vivant lifestyle.  What?  You didn’t know that an AuD prepared you for those awesome responsibilities?  Read on.

As a  potential Legislative Intern who was reading the January issue of Vanity Fair while sitting in a Starbucks in Tucson, I was shocked and chagrined to turn the page and see this lead sentence in the V.F. Mailbag (this sentence is a joke, right?):”{{2}}[[2]]More from The V.F. Mailbag, Vanity Fair, February 2013, p 50.[[2]]

I am a doctor of audiology who was reading your December issue while waiting for a flight at the Phoenix airport and was surprised to see Kate Moss’s nude photo when I turned the page.{{3}}[[3]]I want to go on the record here and state the obvious: This was NOT me. I live in Arizona, I am a doctor of audiology, I have sat in the Phoenix airport, I have read Vanity Fair.  Despite the overwhelming evidence, I repeat: this is NOT me.[[3]]

VF Mail Bag Editors, known for their razor-sharp critical thinking skills–quickly zeroed in on the lack of such in our profession’s self-appointed representative:

“What a coincidence: we are a magazine-mailbag feature with a similar affinity for sentences containing unrelated information….”

I doubt that I’ve ever been as embarrassed by the self-important, overly used and completely useless use of our “doctor of audiology” title in my life, not to mention the completely nutty sentence, which I’ve attempted to emulate above.  I’ve shown this page to other Audiologists and garnered comments such as  “clueless, pretentious, painfully predictable, pompous.” Responses of non-audiologists indicate a general disconnect: “hilarious, inconceivable, Why did they say that? What were they thinking?” etc.   V.F. Mailbag snagged the best response — Severn Day in Moorpark, CA, unfortunately not a self-identified doctor of Audiology–managed to say all that was needed without mentioning his profession, degrees, or airport location:

Indeed.  VF knows entertainment, Kate Moss knows the camera, Severn Day knows gravity, Thomas Edison knows electricity, Legislators know Interns, Audiologists know…. Audiology.  Only that and nothing more, That’s the meaning of certification, licensure,  specialized degrees, Scope of Practice–specialized knowledge and skills restricted to those who demonstrate proficiency in specialized, narrow areas. Notice how often “specialized” shows up?  No matter how good an Audiologist one is, regardless of one’s degree level or airport of choice, none of that transfers and gives us special gifts, training, or credentials to evaluate content of entertainment magazines or other forms of Free Speech including cleavage.

And so the Meaning of Life boils down to careful husbanding of resources, which, coincidentally, is the short hand definition of Economics.  Life is short.  It’s not as durable as concrete. The longer the life, the more sitting in airports and other absurdities. You can’t be good at everything, but you can be good at something. If you’ve got it, flaunt it.  Just ask Martha Stewart, Thomas Edison, Kate Moss, even me.  Just do NOT ask that doctor of audiology sitting in the Phoenix airport.

So much for getting a life.  Time to tuck them up and start on the next 100 posts, in hopes they’ll get better with practice.