What is surprising is that private school tuition is not the most expensive option in every case. Tuition rates at the four private schools in our sample ( Fig 1, below) were  lower than at four out of nine public university  non-resident programs sampled (see Fig 2). 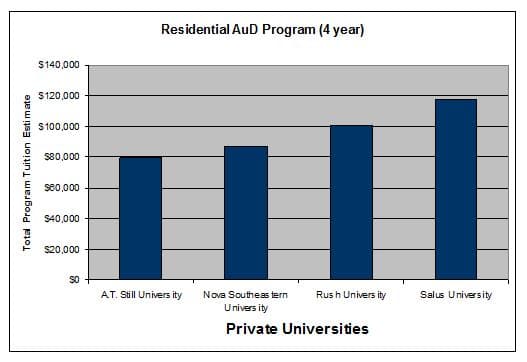 Program costs varied by about $40K among private schools (Fig 1).  That is a big range, but it was small in comparison to the range in public university programs.  Tuition costs for the latter varied by $60K for in-state and by  $100K for non-residents. 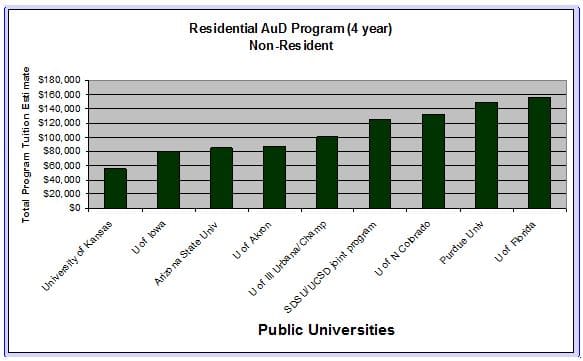 If you’re a prospective student and you don’t have an AuD program in your state, or you are from another country, don’t discount attending private university as an option. You might  save tens of thousands of dollars in tuition by going to a private school.

Even if you are a resident of a state that has an AuD program, there still may be advantages to choosing a private university.  Unlike public universities, private schools are not at the mercy of state budget cuts.

It behooves prospective students  to apply economic principles to determine the Utility they derive from the Price an institution sets for its educational product. Understanding that tuition costs are sunk costs representing choices made at the expense (opportunity cost) of foregone choices will give prospective students a better view of their choices and costs of those choices.  That takes us to the bigger economic picture.

The recent economy forced state budget cuts across the nation.  Those have significantly impacted higher education funding for public universities. Due to less reliance on state budget forecasts, and lower allocations for several years during the recession, scholarships and other tuition assistance were at risk in public institutions.  As a result, such funding may be more widely available at private universities at present.

Private universities have seen slowed growth in tuition rates in recent years, especially compared to their publicly funded counterparts. Therefore, one might forecast that large annual upswings in tuition may be less likely to occur at private institutions in times of economic stress on state budgets. To the extent that the assumption holds up, those looking to do an AuD in future years should include private schools in their cost projections.

Results are mixed so far and crystal balls are hard to come by. The best advice to prospective students is to do their due diligence for all schools, rather than relying on conventional wisdom to make their decisions.

Depending on your individual situation as a prospective AuD student,there may be advantages to attending private school over a public school or vice versa. Next week we’ll examine the avenue that a large majority of audiologists pursued to get their AuD: Transitional programs.

Kevin Liebe, AuD, is a clinical audiologist in private practice in Richland, WA. He currently chairs the Government Relations Committee of the Washington State Academy of Audiology. Dr Liebe has written other posts at HHTM.