Let’s Hear It From the Providers 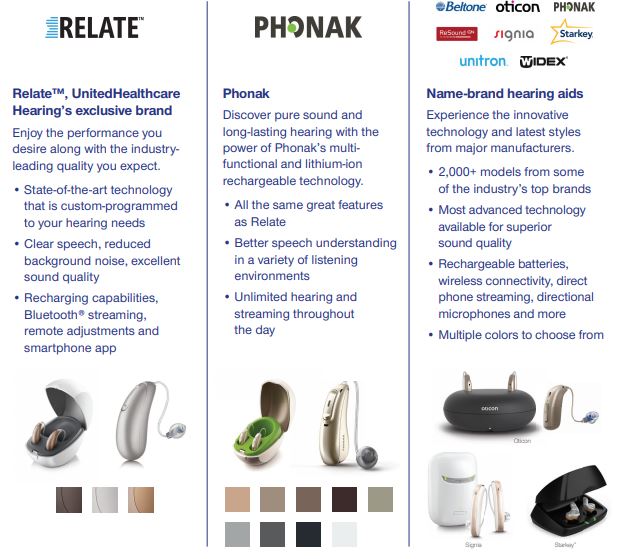 Amidst technological disruption and social policy discussions that cast a pall over the dispensing landscape, it is surprisingly refreshing to hang out with fellow travellers.  That term, often a pejorative, best describes the relationship of Hearing Economics to the world of audiology and hearing aids:

“a person who sympathizes with the beliefs of an organization or cooperates in its activities without maintaining formal membership in that particular group.”

As a sort-of economist, I don’t belong to the club. As an actual dispensing audiologist, I believe in the mission.

Belief is strengthened after a week of professional immersion, first as a participant at the New Jersey Association of Hearing Health Professionals (NJAHHP) meeting, second as an observer at the 28th annual American Academy of Audiology convention, AudiologyNow!, last weekend.  Hearing professionals of all ages and types participated in those events.  All appeared to share remarkable characteristics.

At NJAHHP and AudiologyNow!, these characteristics were manifest no matter how early or how long the sessions:  nobody fell asleep!  No wonder hearing health, especially audiology, ranks so high in job ratings. NJAHHP is a particular case in point, having successfully blended traditional dispensers with dispensing audiologists to create a dynamic few days of fraternity and learning.  In the words of one participant:

we have made a constructive transition from a traditional Dispenser led organization to a Dispensing Audiologist led organization.With pretty much a side by side partnership, if not forbearance,  in the process.

Today’s post was scheduled to be the wrap-up on barriers that protect incumbents in the hearing healthcare field.  Audiologists and dispensers are incumbents and, therefore, enjoy protected status, which may explain why they’re such a happy group.  But, their enthusiasm for their patients, their practices, and learning in general are important means by which they maintain their incumbency and differentiate themselves in the market.  Not all barriers are bad.  On that happy thought, the barriers wrap up post is postponed for several weeks.

Today’s post is a snapshot of opinions garnered at AAA and from fellow professionals at the NJAHHP meeting.  In the latter, several mini-surveys were conducted, by show-of-hands or ballots, as part of presentations on patents and on technological innovation and disruptions in our industry and profession.  These are unscientific surveys, intended to keep the audience awake and reported here for your reading enjoyment and comparison to your own opinions.

Featured Sessions at AudiologyNow! were where the juxtaposition of technology and services were discussed:

NJAHPP participants were about 100 clinicians who fitted hearing aids for a living and gave up two clinical days to listen to talks presented by Barbara Weinstein, Granville Brady, and myself.  In describing patented technologies to clinicians, I wondered which ones had immediacy in their professional lives.

Accordingly, I asked participants to cast their votes for the one technological innovation (out of 5 on the ballot) that they believed was most important to the hearing aid field since the advent of digital hearing aids.  Then, they voted a second time for runner up.  The ballot choices were culled from responses I collected earlier from researchers and industry innovators who were asked to identify the most significant technological advances in the digital age.

Did researchers and clinicians agree on what technologies had made the biggest differences in our field?  More or less.  Feedback control and noise reduction were ranked highest by both groups.  Do you agree?  How would you have cast your votes? 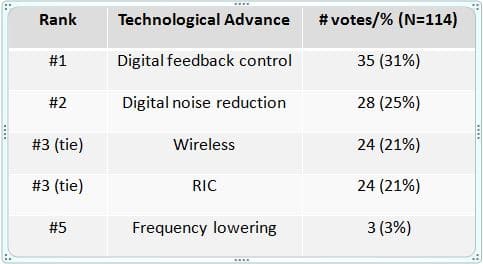 PSAPs… if You Care

At AudiologyNow! I counted 384 posters in two days of sessions, none of which included PSAP in their title or, presumably, their content. Two professionally-dispensed PSAPs were debuted in the Exhibit Hall and beyond:

Google “PSAP”  and you find out that it means Public Safety Answer Point.  You’ll have a hard time finding it linked to ear level devices in the search entries, except in paid in-line ads.   PSAP emerged in our field mysteriously around 2004 as a Personal Sound Amplification Product. Where did this term originate?  No one seems to claim it.  If you know who named it, please add a Comment to clear up this mystery.

More to the point, do you like the name PSAP?  Our field likes acronyms, but this one doesn’t exactly roll off the tongue or conjure a hearing-related image.  Has PSAP as a concept penetrated our market or our minds or those of our patients?   NJAHHP participants’ opinions (Table 2) don’t weigh in on the side of PSAPs, by name or by concept, though they’re largely indifferent to the whole thing.  What do you think?

With PSAPs ranking so low on the dispensing horizon, consider what professionals think about Hearables, if they think about them at all. Perhaps under a different name since they cover so much ground?

No Hearables graced the Exhibit Hall floor, at least that I could see.  With Starkey no longer exhibiting at AAA, we missed the opportunity to see the Bragi Dash prototypes.

At NJAHHP, I put up slides on Hearables and wondered what the audience thought of them and the Hearable name.  The results (Table 3) show that few have heard of them, fewer have seen them, none have adopted them (one participant had a Hearable but wasn’t wearing it), none had patients asking for them.

2015 may have been the Year of the Hearable, but Hearables by any name have a way to go in this crowd.  On the other hand, at least one person at every table at NJAHPP was Willing to Buy at $299/pair if I’d had some on hand (Table 3).  This encourages me to scatter Hearables around the waiting room in my practice.  What do you think?

We know that you are happy, enthusiastic, conversant professionals who love what you do.  You’re also readers of this blogsite, which makes you audience participants.  Why not tell us what you think of any of the above?

And, while you’re at it, why not predict what you think will happen to PSAPs, Hearables, audiologists and dispensers in the next year or so?

We have people standing by the phones, or whatever people stand by in the Year of the Hearable.