Costco’s Business Model: Build It and They Will Come

Costco has enthusiastically embraced hearing aids as store-in-store revenue builders in all of its burgeoning warehouse locations since the mid-90s. The rate of Costco hearing aid center growth (feature image, red) has outstripped warehouse growth (blue) in recent years. Both are on fast tracks. 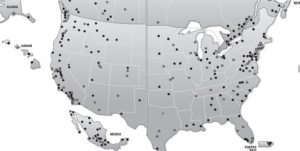 Costco’s Big Box footprint is large on the land (Fig 1). There’s a booth in every Box. Hearing aid prices are low, revenues are high. Those facts are established.

Other economic facts are harder to come by; some are still emerging. On its own, the building-and-booth growth strategy does not automatically conjure increased consumer demand for hearing aids and services. Spikes in consumption do not automatically translate to increased satisfaction and shifts in Demand.

Big store retail chains of all varieties are failing or drastically reducing their infrastructures (think Sears, JC Penney, Radio Shack, Macys, WalMart, Kmart, Kohl’s, Safeway, Staples), due to changing shopping patterns (think Amazon and probably drones). This year is expected to bring  a “giant wave” of closings in the US to reduce the square feet of retail space per person, which is the highest in the world (23.5 sq ft per capita).

In the middle of this, Costco is building more boxes and booths-in-boxes? Is it possible that hearing aids are the last frontier on in-store retail?  Are they a serious part of the Costco expansion strategy? Inquiring minds wish to nail down Costco’s share of the hearing aid market and know in what ways its presence is influencing the goods market and sending shocks to the supply side.

The last post left hanging the question of whether Costco’s growth of market share signals a growth of the market itself or just a loss of share for other providers.  Today’s post takes a swag at an answer. 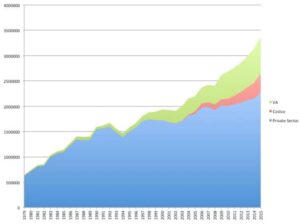 Costco sales have indeed kept pace with its infrastructure expansion, at times at the expense of existing practitioners. In 2014, 1.9% of private sector growth (3.4% total) was attributed to Costco.  One can interpret this to mean that the traditional 3-4% expected annual growth at retail held steady that year, but only because Costco took market share from dwindling private practice sales. Those grew a paltry 1.5%.

One could interpret 2015 to mean that the pie was growing, thanks to all involved. Rather than posing a threat to private practices, perhaps Costco was doing its share to grow the pie and spread the wealth.   Or maybe not.  What if it’s growing the pie but wants more pie?

on a square foot basis the Hearing Aid business is by far the most valuable real estate in the warehouse.”

The overall commercial US hearing market grew at a healthy pace in 2016 — 10.6%, which beats the almost 9% growth of 2015.  Hearing Review estimated 15% internal growth in sales at Costco. On that basis, HR assigned Costco 12% of the market in 2016. Running the numbers, Costco alone accounted for almost 1% of total 2016 retail growth.

More pie for all, but Costco’s slice keeps getting bigger.

The hearing aid market, as we know it, is famous for low, static penetration and highly inelastic Price Elasticity of Demand. In such a market, it’s not unreasonable to wonder whether Costco itself is a Demand shifter and not just a market encroacher.

A prior Econ 101 post discussed the distinction of this important difference.

The US hearing aid market is shifting in a positive direction thanks to several economic determinants familiar to all of us in the profession.  Baby Boomers are hitting 65 and the aging population in general is growing healthier and proportionally larger.  Even without Costco, more hearing aids are bound to go out the door.

For these and other reasons1, financial analysts forecast future market growth in hearing aids. In addition, Costco is identified as another determinant shifting Demand, believed to be

“…expand(ing) the market by opening up a new price point.”

As Always, It’s Not (Just) About Price

The price point determinant is interesting and deserves data drilling in another post.  Price, by itself, does not shift Demand. Price is an independent variable that slides consumption up and down a given Demand schedule. In the equation, there is a one Quantity demanded for a given Price. That may sound like an academic distinction (which it is), but it’s one of consequence.

Conversely, Price of a substitute (similar) good is a determinant that can shift Demand, meaning that Quantity demanded changes for a given Price.  The more Costco hearing aids are perceived as similar to traditionally dispensed instruments, the closer the substitute and the more it is consumed, which shifts the overall hearing aid Demand curve “up.”  If the Price of substitutes drop, the Price of the “other good” usually drops as well, with expected result: lower Price, more consumed.  This effect is evident in recent times in the hearing aid market, too.

One other Demand shift determinant is change in consumer preference. In the present case, consumer preference is expressed in access as well as price.  If consumers prefer lower price in combination with a non-medical, store-in-store dispensing model, this too will shift the hearing aid Demand curve out.

Costco’s success may be more significant than just taking market share from existing providers by putting pressure on Price.  Instead, it’s success (or audiologists’ failure) may be due to a new, frequently-preferred distribution channel for a substitute good which is undifferentiated from traditionally dispensed hearing aids in the minds and wallets of a growing group of consumers.

One way to test that idea is to look at market growth in states with lots of Costcos versus states without Costcos (yes, there are a few still out there).  Look for a rudimentary analysis along these lines in a future post.

1In addition to Costco’s low price point, other reasons for expected market growth are: 1) retail marketing to draw in more and younger consumers, 2) aging baby boomers, 3) destigmatization due to technological advances and entry of “non-specialty” retailers. (from Bernstein report)