Dominance in a Patent Class

Charting patent trends can track technological innovation and stagnation by proxy variables such as geography (countries, metropolitan areas), industry concentration, education (proximity of universities, proportion of PhDs), income per capita, etc. One measure is growth and dominance of patent classes by an industry or company.

Of interest to the hearing aid industry is its representation in Class H04R patents. That patent class emerged suddenly in 1991 and has surged rapidly since then (see feature image).   H04R patents describe speakers, mics, transducers, etc., for use in a variety of applications1. Within H04R, Subclass 25/00 of H04R is specific to “Deaf-aid sets (constructions of transducers per se; structural combination with spectacle frames; processing of speech signals.”

At the time of writing, there are almost 15,000 H04R patents awarded.  Two of the Big 6 hearing aid manufacturers, Starkey and Sonova, rank in the top 10 patent owners for this class. The top 10 also includes several consumer electronics companies eyeing the hearing aid market  (Bose, Samsung and Apple), as discussed in other HHTM posts (click links to go to those stories).

Figure 1 is not especially compelling: the top companies own less than 15% of all H04R patents.  Bose ranks #2 but only has 2.1% of the patents; Starkey is #3 with less than 2% of the patents.  That’s not much of a story. But that story is about all patents for all time in the class, not in recent years when activity soared (see feature image). 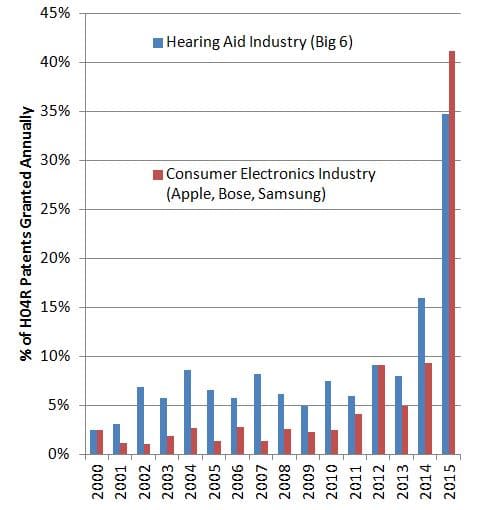 What about the rate of ownership of these patents by industry since the class took off in recent years?  That’s a different, much more interesting story  (Figure 1).

Is it a Meaningful Story?

“….patent data contains information that can be used to understand the relative rate of improvement among technological domains.” (Benson & Magee, 2015)

The science of patent activity analysis is complex and highly statistical, far beyond anything that will ever appear in Hearing Economics.  However, one such paper by Benson and Magee concludes that technological progress in an area of interest is strongly correlated with a few patent indicators such as patent immediacy (age of closest prior art) and patent recency (publication date) of the patents, but is not correlated with patent effort (total number of patents).  There aren’t many H04R patents per year (effort), but most of them that are owned by the Big 6, Bose, Samsung and Apple are distinguished by their immediacy and recency, so perhaps these indicators signal rapid technology progress in this area.

To the extent that patent activity serves as a proxy for economic growth due to technological innovation, then growth in demand for ear level devices may be anticipated. As Demand grows, so goes Supply. And, to the extent that H04R patents are important to hearing device development, these nine companies may hold positions of dominance in the ear device market.