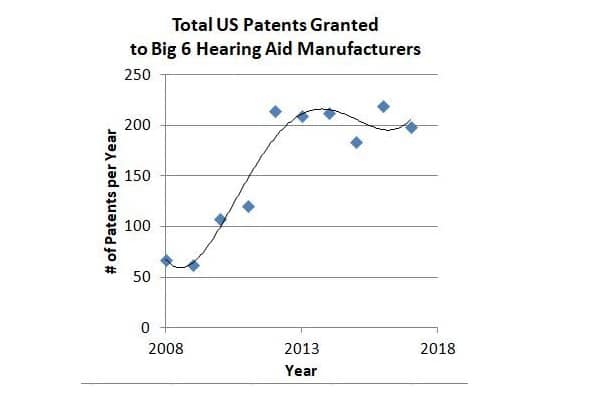 Sivantos/Widex Has a Lot of Clout by Any Measure

The M&A of Widex and Sivantos was May’s big news in the hearing aid world. The new entity (name as yet undisclosed) is predicted  take the new Denmark-Singapore headquartered entity to 29% global market share, making it the top player among major hearing aid manufacturers (Bernstein, June 1 20181), ahead of 25% market share for Sonova and William Demant, respectively.

Formidable market position for the merged company is manifest in the patent portfolio. At the time of writing, Widex+Sivantos has about 650 patents in force, besting its nearest hearing aid manufacturing rival2 by more than 40%.  As a whole, the Big 6 portfolio has consistently added about 200 patents per year to the industry in recent times (see feature image). The new entity owns for more than half of all patents in force in the total portfolio (just under 1300).

Smaller players continue to enter the ear, if not the hearing aid manufacturing space. Last month’s patent list noted a variety of ear devices that covered or sat in the ear while performing a variety of tasks. This month is no different.  Consider USPTO #9956119 (Fig 2) which looks like a bullet but may act like an ear protector. In a strange case of science imitating life, the inventors provide background for utility, if not efficacy, of the device:

“Historically, bullets have been used as ear plugs. Military service members have been known to use rifle bullets as ear plugs both in time of war and in time of peace. Bullets present an easy means for removing them from a user’s ears since they are firm and easy to grab. However, the metal ends inserted into the ear canal are uncomfortable to wear. What is needed is an ear plug with a soft elastomeric insert which is comfortable to wear with a metal outer casing presenting an easy means for removal.”

Who are You, Really?

What do you think about developing a Hearable that detects and calls out automated voice assistants? This questions stems from the ethical outcry to Google’s demo of its Duplex artificial intelligence (AI) software last month, in which phone receptionists were unaware that they were conversing with a computer.  Communication is at least a two-way street, not counting assistants.

We humans must provide evidence of our mortal beings (“I am not a robot”) before many Internet sites agree to converse with us. Shouldn’t it work the same in reverse.  It’s nice to think that future audio input to our ears will carry some means of identifying human versus robot assistants.  There are a number of privacy issues contained in patent pending applications and this seems like one more avenue worth exploring and nailing down.

1Clive LB, Wielechowski R, Morse A. Hearing Aids: A closer look at the merger of Sivantos and Widex. A new #1 with a disruptive vision of the future. Bernstein, June 1 2018

2 CI patents not included in tallies.