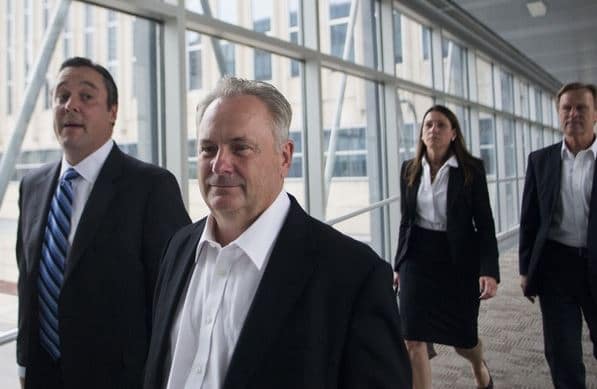 Last September, Starkey made headlines when it abruptly fired President Jerry Ruzicka and several other executives amid accusations of illegal business activities. One year later, as reported in the Minneapolis Star-Tribune and numerous other Twin Cities media outlets, Ruzicka, along with former CFO, Scott Nelson and former human resources director, Larry Miller were charged with embezzling $20 million from Starkey over a 10 year period. In addition to those three former executives, business associates, Jeffrey Taylor and Lawrence Hagen were charged. Hagen was a former president of MicroTech, a former Starkey-owned hearing aid brand.

U.S. Attorney Andrew M. Luger announced the federal indictment Wednesday, September 21.  Luger said their scheme involved a bogus company, Archer Consulting, which received “commission” payments for the supposed sale of hearing aid components from another firm, Sonion. As many know, Sonion, is a supplier of hearing aid components to hearing aid manufacturers. Between 2006 to 2015, according to the federal documents, Ruzicka and Taylor, who was president of Sonion, allegedly stole about $7.65 million through the sham company. Authorities also allege Ruzicka, Nelson and Miller abused their positions of authority at Starkey to obtain benefits and embezzle money from the company. Prosecutors say Ruzicka awarded himself and other co-conspirators bonuses that were hidden from Starkey founder, Bill Austin via falsified compensation reports.

According to a local Fox news report, Ruzicka, Taylor and Hagen are accused of running two dummy companies, Claris Investments and Archer Acoustics. Taylor allegedly lied to his employees at Sonion, telling them that these companies were Starkey affiliates, entitled to discounted products. Those discounted products were later sold to other manufacturers to collect at least $600,000 in illegal profits.

In 2014, Ruzicka used $200,000 in Starkey funds to pay his personal income taxes. He also used Starkey funds to purchase a Jaguar for $119,188, then transferred ownership of the car from Starkey to himself by signing the title as both representative of the seller and also as the buyer.

Among the more egregious charges, per the Fox News report, Starkey founder Bill Austin created a company called Northland US for the purpose of operating retail hearing aid establishments. In 2006, without Austin’s knowledge, Ruzicka and Nelson transferred Northland’s assets to a new company they controlled, Northland Hearing Centers, Inc. They forged Austin’s signature to complete the transfer and later awarded themselves restricted stock, and ultimately cashed out for $15 million

Further, according to a local CBS report, Nelson used more than $200,000 in company funds to purchase a condo so that he could carry on an affair with another Starkey employee. Prosecutors also say Nelson took more than $225,000 from the company, but claimed it as a loan. That loan was never reported in company documents and Nelson hadn’t made any repayments.

A Year of Investigation

Over the course of the year-plus saga, Ruzicka and other former executive have filed suits against Starkey wrongful termination.  Last November, federal agents from the Federal Bureau of Investigation and the Internal Revenue Service raided the homes of Ruzicka and Nelson. Subsequently, federal authorities have interviewed or taken documents from other fired workers, including Miller, former chief operating officer Keith Guggenberger and former executive assistants Julie Miller and Kim Mohlis. Throughout the ordeal, current Starkey executives, including founder Bill Austin have not publicly commented, except to say that Starkey was the victim of a crime.

Below are the details on each of the defendants:

According to the Star Tribune, Jerry Ruzicka and three other former Starkey executives charged in the $20 million scheme plead not guilty on Friday, September 23rd. Scott Nelson, the fifth co-defendant, has yet to be arraigned due to illness and will answer charges following his recovery.

Following the hearing in federal court, defense accused Starkey majority owner, Bill Austin, of misleading authorities that he was unaware of the transactions. According to John Conard, attorney for former Starkey President, Jerry Ruzicka, “This indictment is based on the claim by Bill Austin that he didn’t know what was happening. That’s untrue.”

The company vigorously denied the claims by the defendants, and a company spokesman was quoted in a statement to the Star Tribune, “The notion that Mr. Austin knew and approved of the criminal conspiracy and related cover-up described in the U.S. government’s indictment — alleging that more than $20 million was stolen from him — is absurd on its face”

“We’d invite any interested party to read the detailed indictment that resulted from a yearlong investigation by the Department of Justice, the FBI, the IRS, the U.S. Postal Service and a grand jury, and then decide for themselves whether the story offered by the defense attorneys makes any sense.”

A trial for the accused has been tentatively scheduled for Dec. 19, 2016.